Most Syrian refugees in the Middle East do not plan to return to Syria in the near future. 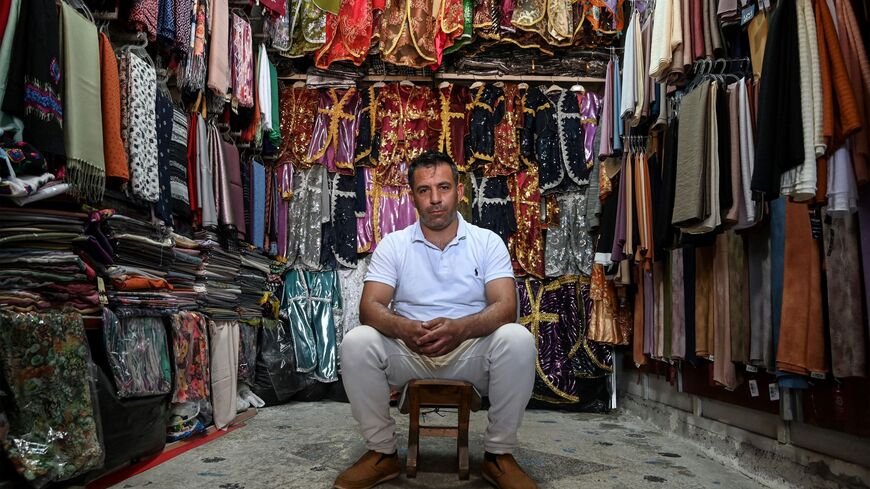 Ahmad Ibrahim, 31, who came from Aleppo, poses at his textile shop in Sanliurfa on May 17, 2022. A new wave of economic turbulence, which has seen inflation spike and the value of the lira drop, has put Turkey's 3.7 million Syrian population under enormous strain. - OZAN KOSE/AFP via Getty Images

Most Syrian refugees in the Middle East do not plan to return to Syria in the near future, according to a recent report from the United Nations’ refugee agency.

The report also highlighted specifics about the challenges Syrian refugees face in their home countries. In Iraq and Egypt, housing was the factor refugees struggled the most with. In Jordan and Egypt, it was food. Food prices are rising across the Middle East, in part due to the Russian invasion of Ukraine.

A 57% majority of those polled said they do ultimately plan to go home to Syria.

Those who plan to return within the year listed reuniting with family, pressure in the host country and missing home as the main reasons.

The number of Syrians who do not plan to return soon has increased since the UNHCR began doing these surveys in 2017, when 78% said they did not plan on soon returning. The figures are similar in each of the four countries.

The reasons also include security and difficulties making a living, according to the UNHCR.

Forces loyal to Syrian President Bashar al-Assad have recaptured most of the country, but there is still fighting between rebel and government forces in the northwest. Turkey is also threatening to again invade the northeast.

There are safety concerns in government areas as well. Eleven soldiers and two civilians were killed in a bus attack in central Syria on June 20.

Many Syrian men also do not want to return because they will be subject to mandatory military conscription.

The Syrian economy is also struggling at the moment. The wheat crisis resulting from the Ukraine war has hit Syria. Inflation is also high and the war has severely damaged infrastructure, among other effects, according to a June report from The World Bank.

US sanctions on Syria also further hurt civilians, according to many observers.

The UNHCR survey did not include Turkey, where more than three million Syrian refugees live. UNHCR spokespeople did not immediately return a request for comment on the matter.

A UN official said earlier this month that around 800 Syrian refugees leave Turkey each week, but that most Syrians in the country plan to stay due to the favorable economic conditions, despite Turkey’s own economic crisis.