The rights organization documented arrest, arbitrary detention, torture and other forms of abuse among Syrian refugees who returned to their home country from Lebanon and Jordan. 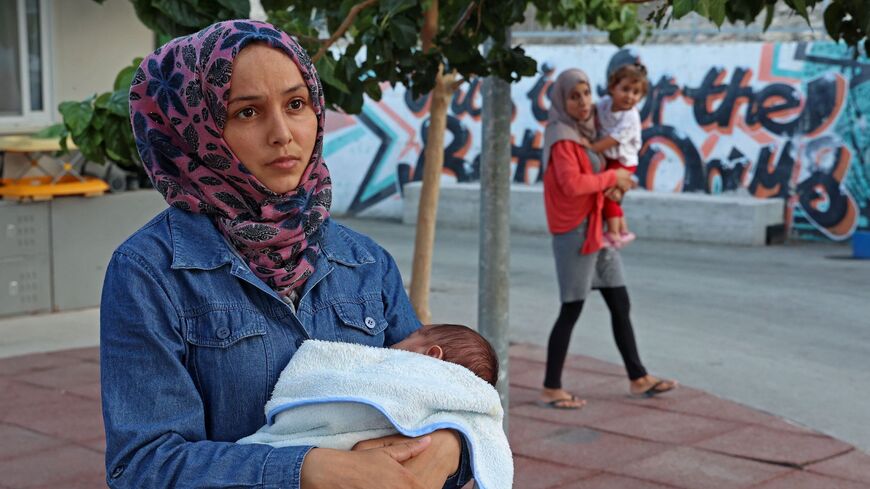 Kawthar Raslan, 25-year-old Syrian refugee who reached Cyprus on boat while pregnant and was separated from the rest of her family, holds her baby Yazan at the Kofinou asylum centEr near the Cypriot coastal city of Larnaca on Sept. 22, 2021. - CHRISTINA ASSI/AFP via Getty Images

Syrian refugees who return to their home country risk grave human rights abuses and persecution at the hands of the Syrian government and its affiliated militias, Human Rights Watch said in a new report.

The 72-page report released Wednesday is based on interviews with 65 returnees and family members who went back to Syria from Lebanon and Jordan between 2017 and 2021. Of that group, the New York-based rights group documented 21 cases of arrest and arbitrary detention, 13 cases of torture, three kidnappings, five extrajudicial killings, 17 enforced disappearances and one allegation of sexual violence.

Even as the decade-long conflict in Syria is winding down in parts of the country, the regime “has continued to pursue the same abuses against citizens that led them to flee in the first place,” the report notes.

“The harrowing accounts of torture, enforced disappearance, and abuse that refugees who went back to Syria endured should make it patently clear that Syria is not safe for returns,” said Nadia Hardman, a refugee and migrant rights researcher at Human Rights Watch.

The Syrian civil war, which started in 2011 as a peaceful uprising against the rule of President Bashar al-Assad, has uprooted more than half of the country’s pre-war population. More than 5.6 million Syrians are living as refugees in Turkey, Lebanon, Jordan, Iraq and Egypt and an additional 6.7 million remain displaced inside Syria, the United Nations’ refugee agency says.

Having seized the majority of Syria from the rebels, the government has insisted that it is safe for refugees to return home. Refugees are also under increasing pressure from host countries that say conditions have improved in parts of war-ravaged Syria.

Earlier this year, Denmark removed the “temporary protection” status given to refugees originally from Damascus and its countryside and revoked the residency permits of dozens of Syrians.