The report documented human rights violations carried out by Syrian intelligence officers against 66 Syrians who returned to the war-torn country, including 13 children. 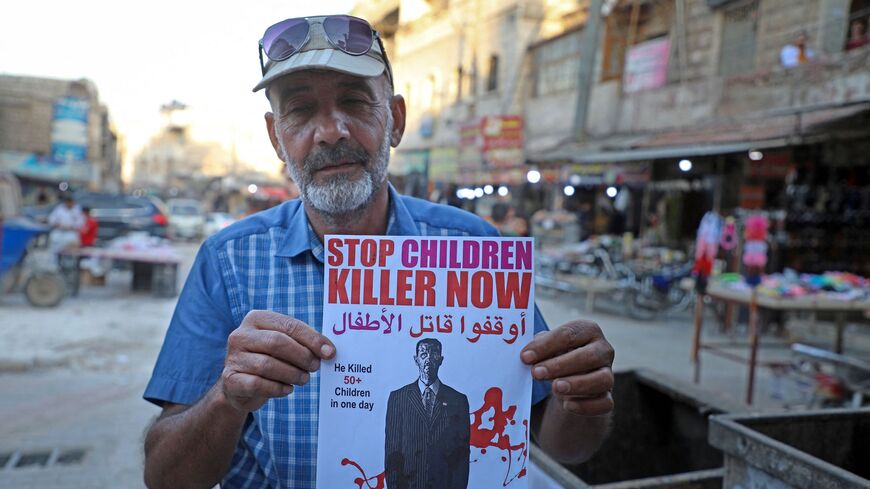 A Syrian man holds a poster depicting Syria's President Bashar al-Assad as a killer in the town of Dana, east of the Turkish-Syrian border in the northwestern Idlib province, on May 24, 2021. - AAREF WATAD/AFP via Getty Images

Syrian refugees who return home risk detention, disappearance and torture at the hands of state security forces, Amnesty International said in a report Tuesday, calling on host countries to ensure Syrians are protected from deportation.

The London-based rights group documented human rights violations by Syrian intelligence officers carried out against 66 Syrians, including 13 children. Among them, Amnesty recorded five deaths in custody and 17 cases of returnees being forcibly disappeared.

“Military hostilities may have subsided, but the Syrian government’s propensity for egregious human rights violations has not,” said Marie Forestier, a researcher on refugee and migrants rights at Amnesty International.

The report says nowhere in Syria is safe for refugees to return. The government regularly accuses those who do travel back of treason or supporting terrorism and in some cases, returnees are targeted for simply having lived in opposition-controlled areas.

The refugees whose cases are documented in the report had returned to Syria from Lebanon, France, Germany, Turkey Jordan, the United Arab Emirates and the informal desert settlement in Syria known as Rukban camp between mid-2017 and spring 2021.

Noor, a returnee from Lebanon, said she and her five-year-old daughter were raped by a security officer in an interrogation room at the border.

“Why did you leave Syria?” Noor recalled him saying. “Because you don’t like Bashar al-Assad and you don’t like Syria? You’re a terrorist. … Syria is not a hotel that you leave and return to when you want.”

The rights group specifically called out Denmark, Sweden and Turkey for putting pressure on Syrian refugees to return home and urged European governments to grant refugee status to people from Syria.

“Any government claiming Syria is now safe is willfully ignoring the horrific reality on the ground, leaving refugees once again fearing for their lives,” Forestier said.

Denmark has revoked the residency permits of Syrians from areas considered safe for return, including Damascus. Amnesty, however, notes that a third of the returnees documented in its report experienced violations in the Syrian capital and surrounding countryside.

The decade-long Syrian civil war, which started as a peaceful uprising against the rule of President Bashar al-Assad, has uprooted more than half of the country’s pre-war population. Having seized the majority of Syria from the rebels, the government has insisted that it is safe for refugees to return home.

“The Assad government has attempted to depict Syria as a country in recovery. The reality is that Syrian authorities are still perpetrating the widespread and systematic human rights violations that contributed to millions of people seeking safety abroad,” Forestier said.

Syria, where an estimated 6.6 million people have fled since 2011, is considered the world’s largest refugee crisis. Most have sought refuge in neighboring Lebanon, Turkey and Jordan, and a further 6.7 million remain displaced within Syria’s borders.