Described as a farce by opponents, Syria’s upcoming presidential elections are designed to keep President Bashar al-Assad in power until at least 2028. 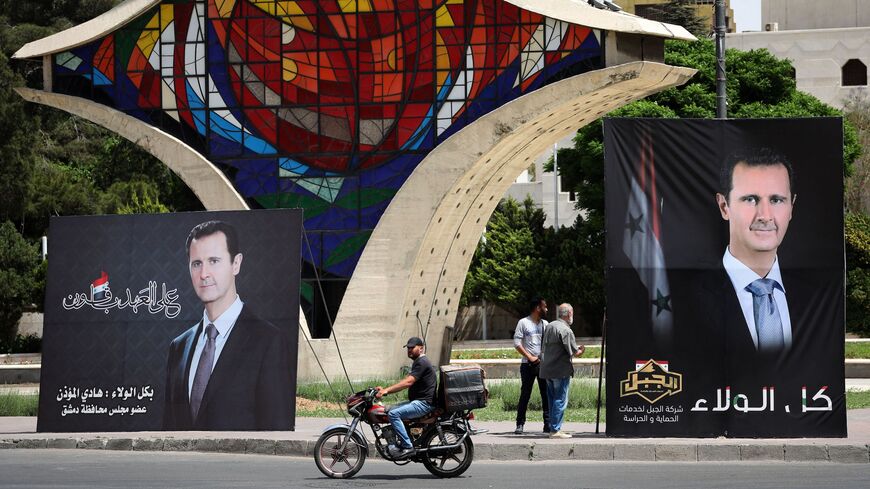 A Syrian man cycles past portraits of President Bashar al-Assad at Umawiyin Square in Syria's capital Damascus on May 3, 2021, ahead of this month's presidential elections. - LOUAI BESHARA/AFP via Getty Images

Syrians on Wednesday cast their votes in an election that rights groups and Western governments say is a foregone conclusion. President Bashar al-Assad is all but guaranteed to win the presidential poll, securing a fourth seven-year term in the midst of a decade-long revolt against his rule.

Under Syria’s constitution, elections for the presidency are held every seven years and must take place at least 90 days before the incumbent’s term expires.

A record 51 Syrians applied to run for president in 2021, including seven women and a Syrian Kurd. Of that group, Syria’s Supreme Constitutional Court determined that Assad and two other men met the requirements for eligibility. Abdullah Salloum Abdullah is a former deputy cabinet minister and Mahmoud Ahmad Marie runs a small, government-approved opposition bloc, Reuters reports.

The electoral process is so weighted in Assad’s favor that neither of the heavily vetted candidates pose a serious threat to him. Among the requirements for eligibility, candidates must receive the backing of at least 35 members of the rubber-stamp Syrian Parliament, where Assad’s Baath Party holds a majority. They must also have lived in Syria continuously for the last 10 years, a condition that prevents members of the Syrian opposition in exile from running.

How does Assad keep winning?

Four years before the outbreak of civil war in Syria, voters headed to the polls to cast their ballots for president. The only problem? Assad was running unopposed in what Syria’s then-information minister defended as “our own style of democracy.” The highly stage-managed election intended to cement Assad’s grip on power ended with the incumbent securing 97% of the vote.

The former ophthalmologist came to power in 2000 following the death of his father, Hafez, who governed Syria with an iron first for nearly 30 years. During their many years in power, the Assads had always stood unchallenged when holding referendums on their rule. As one Syrian writer put in 1991, after Hafez won 99.9% of the vote, “even if Allah had run, he wouldn't have done as well.''

But the regime started paying lip service to democracy in 2014. When Assad’s second term was up, Syrians for the first time cast their votes for president on a ballot that featured multiple (pre-approved, little-known) candidates — Assad, lawmaker Maher Hajjar and businessman Hassan al-Nouri. It wasn't much of a contest: Nouri himself showered praise on Assad throughout the campaign.

The opposition decried the 2014 election as a sham and then-Secretary of State John Kerry denounced the balloting as "a great big zero." Sure enough, Syria’s strongman won in a landslide, capturing nearly 90% of the vote. This year’s election is expected to produce similar results.

Syria will hold presidential elections on May 26 and it’s fair to say this is the most diverse set of candidates ever. pic.twitter.com/3gm3MCvZg9

What does the international community say?

The 2021 election flies in the face of a UN Security Council resolution that is supposed to pave the way for free and fair elections in Syria. Adopted unanimously by the 15-member body in 2015 with the backing of the Arab League, the European Union and Turkey, UN Resolution 2254 calls for a transitional governing body, a new constitution and UN-supervised elections.

The UN has repeatedly brought together delegates from the Syrian government, the opposition and civil society to draft a new Syrian charter. But the talks in Geneva have barely gotten off the ground and many analysts speculate that Damascus was stalling so that Assad could win the 2021 election under the country’s current constitution.

After the latest round of talks deadlocked in late January, UN special envoy for Syria Geir Pedersen said credible elections “seem far into the future” and that a new approach was needed.

Syria, meanwhile, is moving forward with an election most of the international community considers an aberration of the process envisioned in UNSC Resolution 2254. Turkey, which backs the opposition and hosts more than 3 million Syrian refugees, said the elections are “far from being free and fair.”

The EU said it would only “be prepared to support free and fair elections in Syria,” describing elections organized by the regime as the exact opposite. US Ambassador to the UN Linda Thomas-Greenfield recently labeled the elections a “sham.”

“We know the Assad regime will attempt to use the Syrian presidential election this May to legitimize its own rule,” Thomas-Greenfield said. “Do not be fooled: These elections will neither be free nor fair and will not be representative of the Syrian people.”

Syria’s main patron Russia, whose intervention in 2015 turned the tide of the civil war in Assad’s favor, has denounced the Western criticism of the election as “interference in Syria's internal affairs."

“It is disconcerting that some countries are opposed to the very idea of pending elections and have already labelled them illegitimate,” Russia's UN Ambassador Vassily Nebenzia told the UN Security Council.

The upcoming election doesn’t come anywhere close to meeting international standards for a free and fair vote, but Damascus has tried to create a semblance of objectivity. Countries friendly to the Syrian government, including Russia, Iran, China and Cuba have been invited to monitor the electoral process.

Who is allowed to vote?

Holding an election in the middle of a civil war makes it a lot easier to suppress the vote. More than half of Syria’s pre-war population has been displaced by the decade-long conflict, which is estimated to have killed more than 400,000 people and created the greatest refugee crisis since World War II. More than 6.6 million Syrian refugees have fled the country, and another 6.7 million people remain internally displaced, the United Nations estimates.

As with the 2014 election, voting this year will take place in only government-controlled areas. That means the millions of people who live in the last rebel-held stronghold of Idlib province and the surrounding opposition-controlled parts of northwest Syria couldn’t cast a vote even if they wanted to.

Nor can those living in Kurdish territory in northeast Syria, or those under the control of Turkish-backed Syrian proxy forces. The administration affiliated with the US-backed Syrian Democratic Forces isn’t allowing ballot boxes inside areas of its control.

Why does Assad even bother with elections?

Elections are another tool for Syria’s embattled president to claim legitimacy, a decade after the start of a peaceful pro-democracy uprising that he blames on foreign-backed terrorists.

Al-Qaeda-related groups and the Islamic State have at times controlled large swaths of Syrian territory; IS was driven out of Raqqa in 2017 but some remnants remain. Al-Qaeda-linked terrorist groups govern parts of Idlib province.

With the help of Russia and Iran, the Syrian government has retaken most of the territory seized by terrorists and opposition forces in the past decade, and Assad is now seeking foreign investment to rebuild the war-ravaged country.

But absent a political solution to the crisis, Western powers say they won’t provide reconstruction funds or normalize relations with the regime. Token elections won't change that.

“No one other than Assad's already existing allies will bite on it,” Khalifa said. “I doubt that Damascus is oblivious to this reality. I think they are more concerned with signaling a sense of normalcy domestically.”

Syria is in the throes of an economic crisis that’s trapped Syrians in poverty on an unprecedented scale. The UN estimates 12.4 million Syrians — nearly 60% of the population — are food insecure. Feeding a family for a month with basic goods such as bread and lentils far exceeds average salaries.

“Winning” the election plays into Assad’s narrative that he is the sole leader capable of unifying the shattered country and steering Syria out of its downward economic spiral. It also deals another blow to the UN-mediated political process.