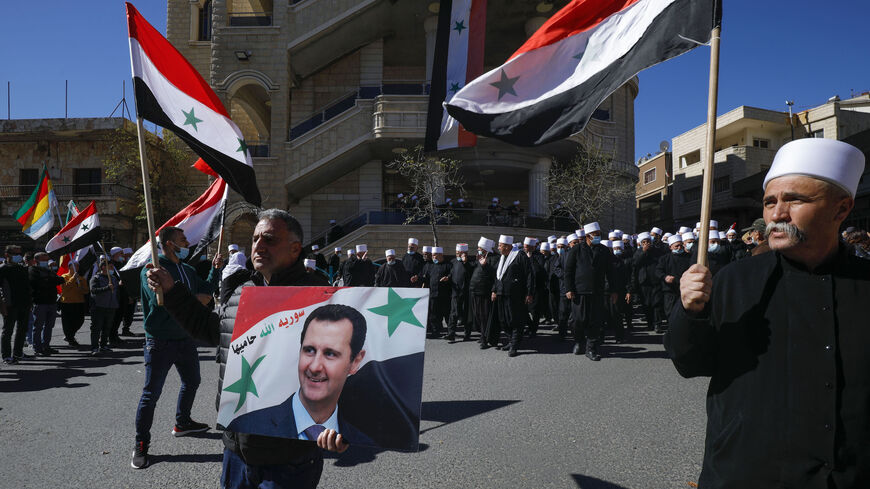 Members of the Druze community lift Syrian and Druze flags alongside a portrait of Syrian President Bashar al-Assad during a rally in the village of Majdal Shams in the Israeli-annexed Golan Heights on Feb. 14, 2021. - JALAA MAREY/AFP via Getty Images

Syria will hold a presidential election on May 26, a contest that critics have denounced as a charade aimed at handing President Bashar al-Assad another seven-year term.

Candidates can begin registering on Monday, parliament speaker Hamouda Sabbagh announced. Those seeking the highest office must also get the backing of at least 35 members of the parliament, where Assad’s Baath Party holds a majority.

Presidential candidates must have lived in Syria continuously for the last 10 years, a requirement that prevents members of the Syrian opposition in exile from running.

The United States and other Western governments say the presidential election — the result of which is seen as a forgone conclusion —  won’t validate Assad’s grip on power.

“These elections will neither be free nor fair. They will not legitimize the Assad regime,” US Ambassador to the UN Linda Thomas-Greenfield told the Security Council last month.

Syria recently marked 10 years since the start of the uprising against the Assad family's rule. The war has killed more than 400,000 people and displaced more than half the country's pre-war population. The UN says an estimated 13.4 million people — two in every three Syrians — are in need of humanitarian assistance.

Assad and his ally Russia have clawed back much of the country, with the exception of a Kurdish-run pocket in the northeast and an opposition-controlled enclave in the northwest.

Assad became president in 2000 following the death of his father, Hafez al-Assad, who had ruled Syria since 1971.

In June 2014, Syria held its first presidential poll to feature more than one candidate in over 40 years. Assad won a third term with 88.7% of the vote, but Western governments slammed the contest as a farce, in part because voting was held only in government-controlled areas and Assad’s two opponents were relatively unknown.