Envoy Geir Pedersen said there is "another possibility to start to explore possible avenues" to resolve Syria's conflict politically. 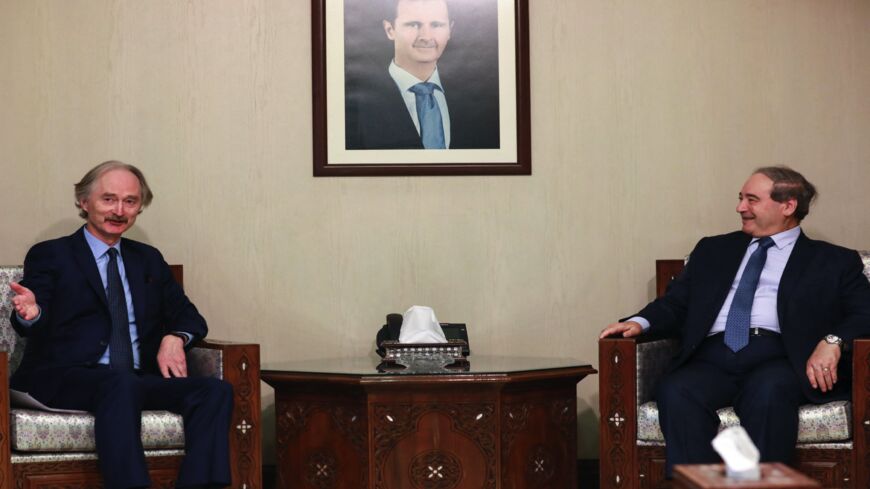 UN Special Envoy for Syria Geir Pedersen met with Syrian government officials in Damascus yesterday to call for a “step-by-step” process of trust-building measures toward a political resolution to the country’s civil war.

“I think there is a possibility now to start to explore what I call a 'step-for-step' approach where you put on the table steps that are defined with precisions, that are verifiable, that hopefully can start to build some trust,” Pedersen was quoted by Agence France-Presse as saying after meeting with Syria’s Foreign Minister Faisal Mekdad.

“My message is that there is another possibility to start to explore possible avenues, to start to move forward on this process,” the envoy said.

Pedersen’s meetings with senior members of President Bashar al-Assad’s regime come after the envoy met with representatives of major stakeholder countries in Europe, the United States and the Arab world over the past week, according to AFP.

It also comes as Arab states increasingly explore ties with the Assad regime, which was suspended from the Arab League in 2011 for its brutal crackdown on pro-democracy protesters.

Assad’s crackdown evolved into a now decadelong civil war that has killed more than half a million people and displaced roughly half of the country’s pre-war population.

The Biden administration has ruled out normalizing relations with Assad’s regime and warned other stakeholders that they could risk economic sanctions if they do business with the Syrian government.

Meanwhile, Russia, which has backed Assad militarily since 2015, has pushed for normalization with Damascus. Iran has also sent military advisers and backed militias to prop up the Assad regime against the nearly nationwide rebellion.

“I think we should now analyze not only the Arabs' [position] but also the American position, the Europeans, the Turkish, the Russians, the Iranians,” Pedersen was quoted as saying in Damascus yesterday.

The latest round of negotiations in Geneva over setting a framework to form a new Syrian constitution ended in failure in October. Pedersen at the time called the outcome “a big disappointment” and said the delegation sent by Damascus failed to present the necessary proposals.

Pedersen’s latest statements suggest the envoy hasn’t given up on work to resolve Syria’s stalemated political impasse. It remains to be seen how the United States and other major foreign stakeholders in the conflict will react to any new proposals.

The UN Security Council ratified Resolution 2254 in 2015 calling for free and fair elections in Syria and laying a roadmap for a political resolution to the conflict.

The Syrian government has largely refused to compromise on the political process and has vowed to retake the rest of the country by force if necessary, though the Syrian army appears incapable of doing so due in part to Turkish and US support for different factions in the conflict.

Syria's frontlines in the northwest and along the Euphrates River in the country's east remain in a stalemate.