UN Special Envoy Geir Pedersen said the Syrian government's side did not present a new proposal as previously agreed. 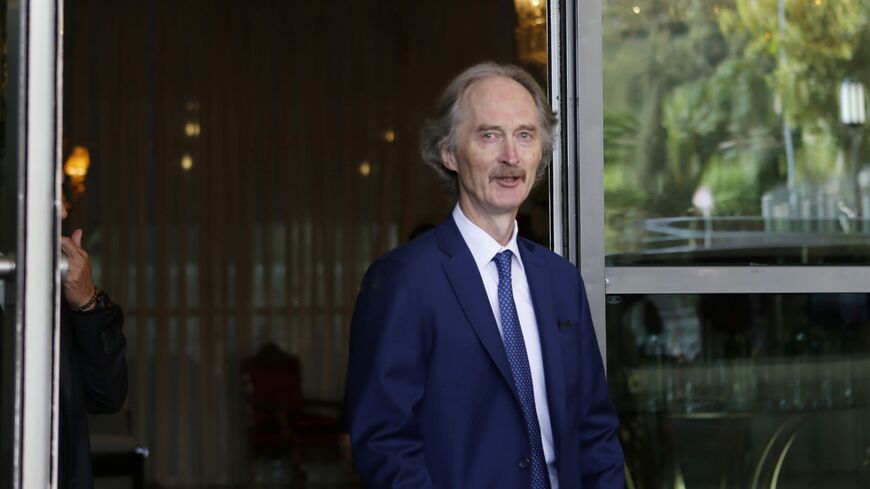 United Nations Special Envoy to Syria Geir Pedersen leaves the hotel in Damascus for meetings with officials in the Syrian capital on October 16, 2019. - LOUAI BESHARA/AFP via Getty Images

The latest round of negotiations to reform Syria’s constitution ended in failure, the United Nations’ special envoy said Friday.

Special Envoy for Syria Geir Pedersen noted that “good discussions” were had on principles that the various sides in the country’s decade-long civil war had previously agreed to introduce, but that ultimately the outcome was “a big disappointment.”

“We did not manage to achieve what we had hoped to achieve,” Pedersen said.

During the four days of talks, the sides were supposed to bring forward proposals for a constitutional framework for various issues, including Syria’s sovereignty and territorial integrity (Syrian government), the makeup of Syria’s military and intelligence (opposition), the rule of law (civil society delegation) and terrorism and extremism (Syrian government).

Pedersen said that the delegation sent by President Bashar al-Assad failed to bring any new text to the table. Instead, the opposition delegation worked from two other draft texts presented by the government and the civil society delegation.

“I think we lacked a proper understanding on how to move that process forward,” the envoy said. Pedersen on Friday was vague on details of the discussions, directing questions to representatives of the two sides.

Just a week ago, Pedersen optimistically said the sides had reached a consensus on how to move forward. The envoy appears to have spoken too soon.

The chair of the Syrian government’s delegation, Ahmad Kuzbari, blamed the opposition, saying they were attempting to “legitimize the Turkish and US occupation of Syrian territory,” according to Reuters.

The SNC’s representative, Hadi Al-Bahra, likewise blamed the government, telling the news agency that “[t]here were not even attempts to achieve a consensus.”

This week’s talks in Geneva marked the sixth round in the UN-led process and the first such meeting in more than nine months. Meetings began in 2019.

The last round of negotiations in January also failed after the Syrian government rejected a proposal by the opposition Syrian National Council on working methods for drafting the constitution.

The Syrian government position is that the entirety of the war-torn country return to President Bashar al-Assad’s control. According to the latest UN count, at least 350,000 people have been killed in the conflict, which began in 2011 after Syrian military forces attempted to crush a popular uprising.

The war is now stalemated, but Assad’s government controls the majority of the country. A 2015 intervention by Russian military advisers and air power is widely seen as having turned the tide in favor of the Syrian president.

Iran also supports militias throughout much of Syria in support of Assad. The country’s northwestern Idlib province, however, lies in opposition and jihadist hands with the military support of Turkey.

The country’s northeast, which includes its main oilfields, is controlled by an alliance of militias led by Syrian Kurdish fighters. That alliance, known as the Syrian Democratic Forces, are backed by the United States military for the purpose of fighting against the Islamic State.

Representatives of the Kurdish-led administration have not been included in the UN-led peace process.

Meanwhile, Russia, Iran and Turkey have pushed a parallel negotiations track based out of Astana, Kazakhstan’s capital.

Pedersen said Friday that there was no date scheduled yet for the representatives to reconvene.