The Syrian parliamentary elections organized by President Bashar al-Assad's regime consecrated the Baath Party's domination and led some critics to say Assad isn't interested in a political solution to the war there. 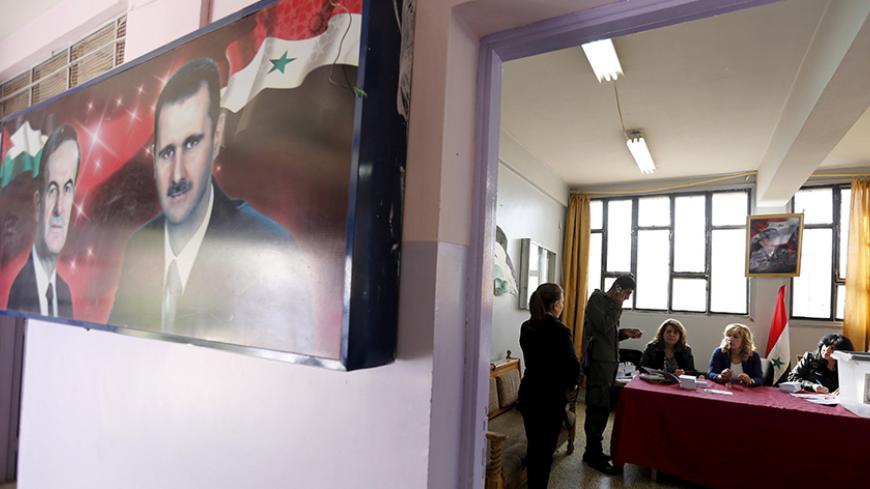 A banner showing Syria's president Bashar al-Assad and his father, former president Hafez al-Assad, is seen inside a polling station during the parliamentary elections in Damascus, April 13, 2016. - REUTERS/Omar Sanadiki

ALEPPO, Syria — In a strange scene full of contradiction, President Bashar al-Assad's government held parliamentary elections April 13 in a country that has been crumbling under the weight of shelling, battles and displacement for five years in a row.

The elections were only held in areas controlled by the regime, which according to Omran for Strategic Studies constitute only 17% of Syria's land area, while the Islamic State (IS), Kurdish nationalist Democratic Union Party (PYD) and opposition forces control the rest of the country.

The war in Syria has sent about 5 million people fleeing to neighboring countries and elsewhere, but the recent elections were held in a peaceful atmosphere, as if no war has been plaguing the country.

Even in provinces completely outside the regime's control, such as Deir ez-Zor, Idlib and Raqqa, lists of candidates were formed and voters headed to polling stations designated for them in regions under the regime’s control.

The decline in the number of Syrian voters was clear through the statistics issued by the regime, despite the Feb. 25 constitutional amendments whereby the military and security forces were granted the right to vote. The number of eligible voters inside Syria in the 2016 elections dropped to fewer than 8.84 million compared with 10 million in 2012.

The number of polling stations also dropped from 12,000 in 2012 to roughly 7,200 this year, which strongly suggests that the area controlled by the regime is substantially shrinking.

In a press conference on the eve of the parliamentary elections, Mark Toner, a US State Department deputy spokesman, called the elections illegitimate and said they do not represent the will of the people. This position was shared by France and Britain.

The opposition in Syria and abroad harshly objected to the elections.

The regime’s affiliated media outlets had another opinion and described the elections as a triumph of democracy — a description Syrians heard for decades in reference to elections that end with a landslide victory for the ruling Baath party, which has been in power since the military coup of March 8, 1963.

Al-Watan, a daily Syrian newspaper close to the regime, described the atmosphere prevailing over the elections at the Tartus University polling center. “It was more like a celebration. Patriotic songs were heard aloud in a festive atmosphere reflecting the triumph of democracy,” the April 14 article said.

The Baath newspaper, issued by the regime, went a bit further. In its article published on the same day as the elections, the newspaper said, “Our people are heading toward elections with hope and confidence that the result will improve constitutional life, the democracy experience and national unity.”

This "democratic experiment," as it was described by the regime’s media, led as usual to the Baath Party winning the majority of 250 parliament seats.

The election results, announced April 16, showed the victory of the entire 200-member National Unity list published by the Baath Party a few weeks before on March 23. This list is made up predominantly of Baath Party members in addition to limited seats for parties led by the Baath Party through the so-called National Progressive Front formed in 1972.

Mahmoud al-Wahab, a former member of parliament for the Syrian Communist Party (Unified), told Al-Monitor, “There are no real elections in Syria at all.”

He added, “It's a farce in every sense of the word. When Hafez al-Assad came to power following the military coup [in 1970], freedoms were repressed, but he made up the so-called National Progressive Front electoral lists — corresponding today to the National Unity electoral list. Democratic elections were canceled and the Baath leadership imposed its trusteeship over these lists, whose members were chosen based on their absolute loyalty to the authority and the Baath Party.”

Bashar al-Assad's regime still deals today with the Syrian revolution the same way it did when the battle began in 2011. The regime started by denying all demonstrations demanding freedom and justice. It claimed that the videos recorded by activists on their mobile phones were altered and manipulated by the Qatari news channel Al Jazeera. It then resorted to the security and military option, while insisting on staying in power and through the Baath Party.

Indeed, many critics believe the timing of the parliamentary elections, coinciding with the Geneva negotiations between the opposition and the regime, confirms that the regime is not serious about reaching a political solution and is disregarding UN Security Council Resolution 2254 underlying the Geneva III peace talks.

The resolution, issued Dec. 18, states that the Security Council “expresses its support for free and fair elections, pursuant to the new constitution, to be held within 18 months and administered under supervision of the United Nations.”

Wahab added, “The regime is exploiting the reluctant and soft positions by the great powers influencing the decisions of the United Nations to [send] a message by holding the parliamentary elections that [Assad] is staying in power and maintaining his policies and approaches in dealing with the Syrian people. At the same time, the regime is putting a spoke in the wheels of UN Resolution 2254 and hampering the Geneva negotiations.”