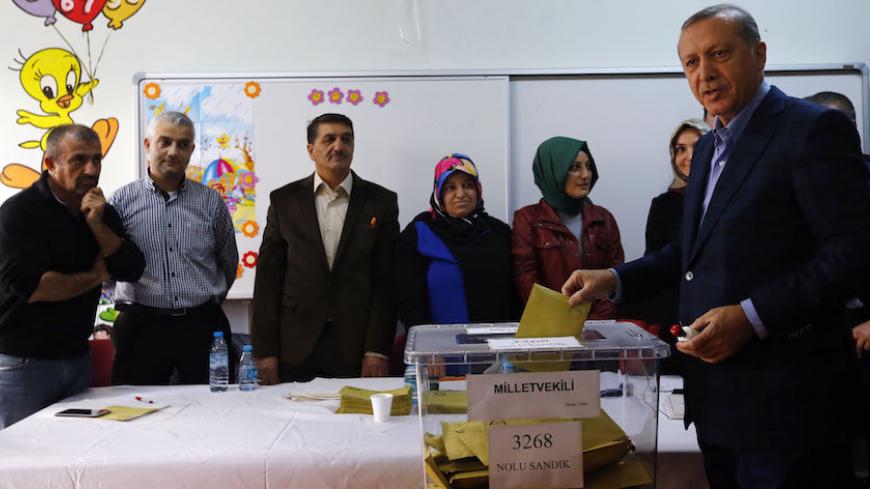 The trends in Turkish politics leading up to the Nov. 1 Grand National Assembly parliamentary elections have dimmed prospects for a shift away from Turkish President Recep Tayyip Erdogan’s increasingly authoritarian tendencies.

Mustafa Akyol writes how “Turkey's already shameful state of media freedom suffered another blow this week — and more might be coming. As a result, it is getting increasingly difficult to define Erdogan’s New Turkey as a democracy, if that term has any meaning other than frequent elections.”

Akyol recounts how in the days leading up to the election, “staunchly pro-government figures” fired the editors-in-chief of Bugun and Millet dailies, and Kanalturk and Bugun TV channels, while Koza Ipek Holding, which owns Ipek Media, was placed under some form of a government trusteeship.

Erdogan is making the case that the ruling Justice and Development Party (AKP) is the best bet to deal with what Metin Gurcan writes is a “two front struggle” against the Islamic State (IS) and the Kurdistan Workers Party (PKK), both of which the Turkish president considers as equal terrorist threats. Gurcan reports on 17 raids conducted by Turkish security forces in Diyarbakir on Oct. 26, including against IS cells.

On Oct. 24-25, the Turkish Armed Forces attacked the People’s Protection Units (YPG) in Syria, which Erdogan links directly to the PKK, for allegedly infiltrating a Turkish red line across the Euphrates River in Syria. As Fehim Tastekin reports, “The critical question now is what Ankara hopes to achieve by fueling the tension. If the YPG returns fire, the government could hit three birds with one stone: It could claim to the international community that the PYD/YPG is a terror organization and in that way try to prevent the PYD [Democratic Union Party] from opening offices abroad. It could also use it to obstruct US and Russian cooperation with the YPG against IS. It could also try to influence Turkish public opinion by delivering a massive blow to the HDP [Kurdish-led Peoples' Democratic Party] because of its support of the autonomy movement in Syrian Kurdistan. To prevent this scenario, the Syrian Kurds will have to keep their cool and act rationally.”

Semih Idiz explains how Erdogan's divisive foreign policies have set back Turkey: “Erdogan’s uncompromising positions — based on his Islamist outlook — with regard to major international crises on or near Turkey’s borders have resulted in alienation for Ankara, depriving it of its ability to fully exercise the potential it has as a major regional player.”

Idiz writes that as Turkey headed into the Nov. 1 elections, “Cynics argue that the best-case scenario for Erdogan, and the worst-case scenario for Turkey, will be the failure of coalition talks, leaving him as the only source of real authority in the country until new elections somewhere down the line can be held to resolve the mess. This, however, could ensure more “precious loneliness,” if Erdogan does not see the writing on the wall and change his stance accordingly.”

Kadri Gursel writes that as a result of the anti-democratic trends of the AKP, “Some voters have given up their demand for political change in the face of instability, internal conflict and terrorist threats, opting to continue the Erdogan regime. True, the increase is a small one, not enough to secure the parliamentary majority. But if the election outcome confirms the opinion polls, the current holders of power may well come to believe they can win the next election if the climate of conflict continues for some time. Thus, even a small increase in the AKP votes on Nov. 1 could take Turkey to even worse and riskier ground.”

Foreign ministers from 17 nations and representatives from the United Nations and the European Union found common ground in trying to end the war on Syria by avoiding, for now, deep disagreements over the role of Syrian President Bashar al-Assad, Laura Rozen reports from Vienna.

The session was notable for the inclusion of both Saudi Arabia and Iran and that despite resistance from Iran, a joint statement was released following the meeting.

The Vienna Communique on Syria announced Oct. 30 reiterated the principles of the 2012 Geneva Communique and UN Security Council Resolution 2118 to convene “representatives of the Government of Syria and the Syrian opposition for a political process leading to credible, inclusive, non-sectarian governance, followed by a new constitution and elections," adding that “the Syrian people will decide the future of Syria.”

On the subject of Assad, Russian Foreign Minister Sergey Lavrov said, “I did not say that Assad has to go or that Assad has to stay. ... I said Assad’s destiny should be decided by the Syrian people,” as reported by Rozen.

UN Secretary-General Ban Ki-moon similarly told reporters, “It is totally unfair and unreasonable that the fate of one person takes the whole political negotiation process hostage. It is unacceptable. ... The future of Assad must be decided by the Syrian people."

The United States had sought a timetable for Assad’s departure, which was nixed by Russia and Iran.

This column reported last week, and said repeatedly over the years, that there would be no progress in Syria without the inclusion of Iran. On Oct. 4, we traced the diplomatic trends among the United States, Russia, Iran, Saudi Arabia and Turkey, which led to the present agreement.

There are still many and difficult steps to get to a cease-fire, but there is no question that the Vienna Communique may be among the most significant diplomatic benchmarks in recent years in Syria.

Syrian opposition under siege in Aleppo

Mohammed al-Khatieb reports from Aleppo that Syrian opposition forces are losing ground in the face of a major Syrian military offensive backed by Russia and Iran.

Khatieb writes, “Aleppo’s southern countryside is of strategic importance to the regime. It contains the supply line between the areas under its control in Aleppo — among them the western neighborhoods, the Nairab military airport and the downtown area — and the other regions it dominates. Its military operations are aimed at expanding its supply route to protect it from attacks that might block it. The regime has focused on Aleppo’s southern countryside because it is an easy front on which to outduel the opposition. It made remarkable progress that will allow it to ensure its supply line to Aleppo. Without new weapons to restore the military balance altered by the regime's Russian and Iranian allies, the opposition forces retreated.”