After announcement of a cease-fire agreement Feb. 22, Syrian President Bashar al-Assad decreed that legislative elections be held April 13 in contravention of the agreement. 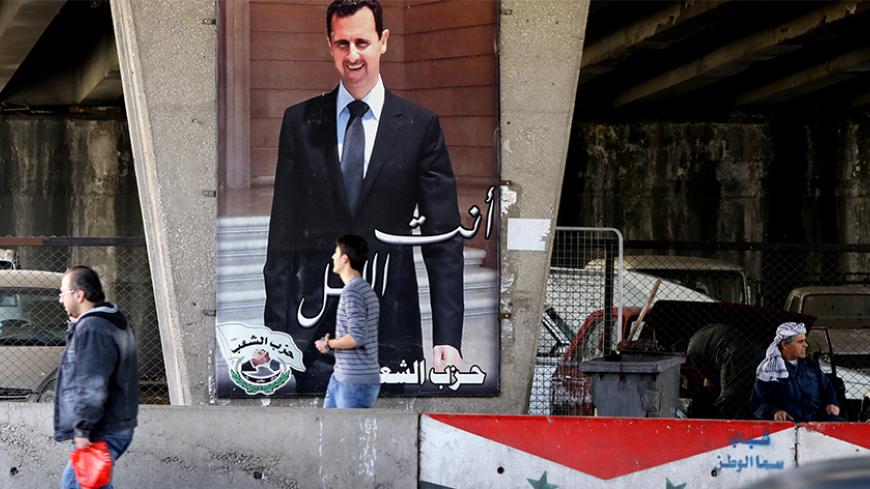 DAMASCUS, Syria — A precarious calm descended on the Syrian capital for the first time in five years after a cease-fire agreement went into effect Feb. 27 at midnight. The cease-fire crowned a deal brokered by the United States and Russia, opening the way for political negotiations. The calm stood in stark contrast to political tensions between Syria and Russia and the opposition's anger following President Bashar al-Assad's announcement Feb. 22 for parliamentary elections to be held April 13.

Assad's call for elections, coming hours after announcement of the cease-fire agreement, contradicted the agreement's planned phases for a political settlement of the Syrian crisis. Russian Foreign Ministry spokeswoman Maria Zakharova said Feb. 24 that Russia will “vigorously” insist that elections take place with the consent of both the opposition and the government after the adoption of a new constitution. “I would like to emphasize that Russia is fully committed to the agreements on the content and stages of the political process of resolving the Syrian crisis in accordance with the decisions of the International Syrian Support Group (ISSG) and Resolution 2254 of the UN Security Council,” the TASS news agency quoted Zakharova as saying.

Zakharova's statement prompted the Syrian government’s media adviser, Bouthaina Shaaban, to address the issue with the Russian media Feb. 24 during a Valdai Discussion Club meeting in Moscow. “The parliamentary elections in Syria are being held in compliance with the constitution. They are a constitutional procedure with which the government must proceed,” Shaaban said according to SANA, the official Syrian news agency. The constitution requires that elections be held every four years, the previous balloting taking place in 2012.

Among the Syrian opposition, some groups support holding elections, while many oppose it. The National Coalition for Syrian Revolutionary and Opposition Forces has not issued an official statement on the matter. Hassan Abdel Azim, general coordinator of the opposition National Coordination Committee for Democratic Change (NCC), told Al-Watan on Feb. 24, “The election decree is a wrong step taken at the wrong time and is not in line with the US-Russian agreement and the international community’s efforts to resolve the Syrian crisis politically. The coordinating committee will not participate in these elections.”

NCC spokesman Munther Khaddam told Al-Monitor, “The parliamentary elections are nothing but a farce of no value through which the regime is trying to say that it runs a state governed by a constitution and laws, while the majority of the Syrian people know that [the regime] is primarily responsible for the destruction of this country.” Khaddam further said, “As a coordinating committee, we will not accept any election that is not in the context of the political solution as stated in UN Resolution 2254 and in other international understandings on Syria. The coordinating committee will boycott the elections and will call on all of its supporters and all Syrians to boycott them as well.”

Rima Flihan, a writer and human rights activist, said, “The announcement of the elections at this particular time — during which major efforts are being deployed to reach a political solution — represents a defiance of international resolutions. It expresses the regime’s intention of noncompliance with the political transition that aims to save the rest of the country and paves the way for all Syrians to build a home again.”

Flihan considers the call for elections an “arrogant step” designed to “raise the morale of the regime's loyalists.” She told Al-Monitor, “When the international will is ready to impose serious negotiations leading to a full cease-fire — giving way to a transitional phase and providing a real breakthrough on the humanitarian issue — there is no meaning or value for such steps [i.e., the parliamentary elections].”

Among other opposition members, Anas Joudeh, head of the National Building Movement, told Al-Monitor, “The importance of the elections lies in the fact that they give the impression that the Syrian state is still operating, and this is particularly important and necessary today. However, this does not mean the electoral process is perfect, nor are its circumstances good. The electoral law was supposed to be amended to hold elections based on proportional representation in the open electoral lists [system] and provide more time to prepare for the elections.”

Joudeh stressed that the call for elections is intended to send a political message to foreign actors rather than to domestic players. Thus, no one in the government took into consideration the pent-up frustrations waiting to explode.

Rima Sawah, a central committee member of the opposition Syria Homeland Party, told Al-Monitor, “We hope the elections are postponed until the situation in Syria improves to give all citizens the chance to participate ... especially since numerous areas remain outside state control and many citizens have left Syria. Elections are a right and a duty for everyone, and we believe in the necessity of effective participation. We hope to take advantage of the truce to give citizens in all areas the chance to participate in the elections.”

Sawah further said, “Holding the elections in this way is contrary to UN Security Council Resolution 2254, but [regardless] the party believes that [the decision belongs] to the Syrian people alone, not any foreign countries or UN resolutions, to determine the country's future.”

Sawah said that despite having concerns, the Syria Homeland Party has faith in the elections. “In politics, it is stupid to blindly trust others. Certainly some parties will try to manipulate the elections, but we will deploy all endeavors to expose them,” she said.

Parliamentary elections in Syria are held every four years. The 2012 elections were the first held after the Council of Ministers promulgated a law in August 2011 allowing the formation of political parties and the establishment of a proportional representation system for the legislature. Before that, all parliamentarians were affiliated with the ruling Baath Party.

As the cease-fire tenuously continues, the Syrian government is hurriedly preparing for elections. Government committees in the various provinces where the regime remains in control received candidates' registrations until the door to apply closed March 1.