The Syrian Democratic Forces closed the crossings connecting their areas in northeast Syria to government-held areas to prevent the participation of the areas' inhabitants in the Syrian presidential elections. 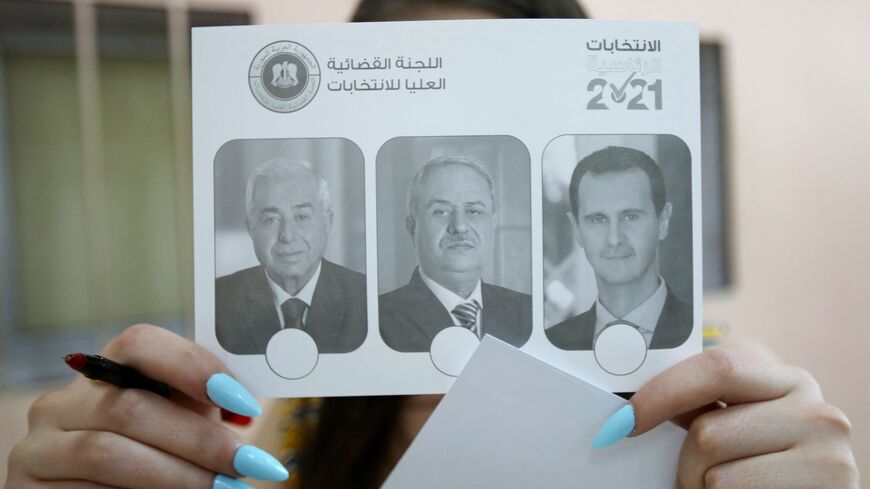 A Syrian voter shows a ballot with the pictures of the three candidates in Syria's presidential election, including President Bashar al-Assad (R), before casting her ballot at a polling station in Damascus on May 26, 2021. - LOUAI BESHARA/AFP via Getty Images

“The Syrian Democratic Council has repeatedly announced that it would not be involved in any elections that do not fulfill the Syrians’ goals related to their lives, rights and political presence, and that it would not facilitate any electoral process that violates the spirit of UN Security Council Resolution 2254,” the statement read.

Riad Darar, the co-chair of the Syrian Democratic Council, told Basnews on May 19 that the Syrian government had asked Kurdish authorities to allow for the holding of the presidential elections in the areas under the control of the autonomous administration.

Azad Barazi, a leader in the Kurdistan Democratic Party of Syria — one of the parties making up the Syrian Democratic Council — told Basnews on April 20 that the Syrian presidential elections would not be held in these areas.

On May 23, Syrian Foreign Minister Faisal Meqdad said, “They call themselves the Syrian Democratic Forces but they forbid Syrians from practicing their democratic right to elect their president.”

A member of the Syrian Democratic Council told Al-Monitor on condition of anonymity, “Intense negotiations were held with the Syrian regime and both parties sought to reach an understanding regarding the elections. The regime demanded the placement of ballot boxes in northern and eastern Syria. But we refused that request, because the regime had turned down a set of conditions we had demanded, such as recognition of the educational curricula of the autonomous administration, granting the latter real estate records in its areas of control and recognition of the legitimacy of contracts related to buying and selling and mortgaging of real estate in its courts — hence recognition of our autonomous administration.

"We decided not to allow the regime to hold the elections in the areas under our control and closed the crossings to those who wanted to vote, although we knew there were not many. The regime would exploit this in the media and try to show that all residents of our areas of control participated in the elections.”

“We will not allow participation in this electoral farce," the source said, adding that the elections will lack legitimacy, and not just because residents of autonomous administration-held areas would not be voting. "Millions of Syrians are scattered between the opposition-controlled areas in both Idlib and northern Aleppo, and our areas of control in northeastern Syria, which means that the Syrian regime will not be able to place ballot boxes in large areas of the country. There are also more than 6.5 million refugees distributed among 126 countries around the world, according to the statistics of the UN High Commissioner for Refugees. The numbers are believed to be actually higher. Most of them will not participate in the elections, which means that these elections lack the support of the Syrian people.”

Abdulaziz Khalifa, a journalist with Baladi News, told Al-Monitor, “Recent developments — including the Syrian regime tightening the noose on the SDF by closing the crossings and preventing the entry of foodstuffs, the recent clashes between a regime-affiliated militia and the SDF-affiliated Asayish and Russia’s temporary withdrawal from some military bases in Tal Rifaat — were aimed at forcing the SDF to accept participation in the presidential elections and allow the residents of its areas to vote." Khalifa said the SDF was trying to avoid participation in the elections through economic concessions such as providing the Syrian regime with oil.

He added, “It is true that the SDF agrees with the Syrian regime on many matters, such as its stances toward the other parties on the ground, notably the opposition and Turkey, and its plans do not involve toppling the regime, but rather to impose itself on the regime and force it to recognize its self-rule, which is the gist of the problem between them. Still, the SDF cannot accept placing the ballot boxes in its areas of control in northeastern Syria, because by doing so, it would be straying from the US position that rejects the elections and become involved in achieving the agendas of the Syrian regime.”

Khalifa continued, “The Syrian regime has not sought, through its secret meetings with the SDF, to persuade it to participate in the elections and to place ballot boxes in the areas under its control because, by doing so, the regime would be acknowledging the SDF’s autonomous rule and contradicting its statements that accused the SDF of being a militia working for the US, whose interference in Syria is considered illegal for lack of coordination.

"The meetings were held by the regime’s security and military men, because the regime does not consider the SDF a political party, but rather an armed group that has gone rogue. The regime wants the SDF to allow the citizens of these areas to head to its security quarters or villages adjacent to the SDF-controlled areas to participate in the elections." Khalifa also said that whether residents of SDF-controlled area voted or not was "of little importance because the election results are decided in advance, whether the crossings are closed or not.”