The Kurdish-led autonomous administration in northeastern Syria said it will not allow the Syrian government to hold the presidential elections in its areas of control. 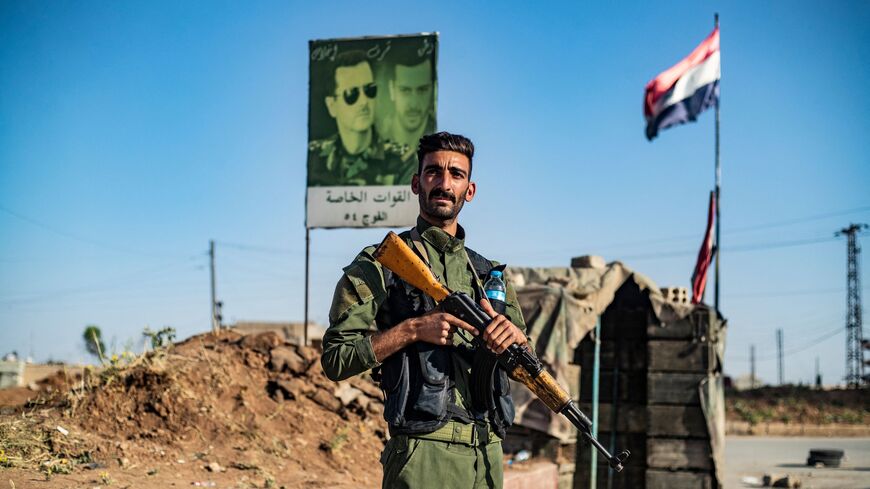 A member of the Syrian Kurdish internal security services known as Asayish stands at a joint checkpoint with Syrian government forces in the al-Tay neighborhood of Syria's northeastern city of Qamishli on April 27, 2021, after the implementation of Russian-brokered cease-fire agreement. - DELIL SOULEIMAN/AFP via Getty Images

The autonomous administration in northeastern Syria affiliated with the Kurdish-led Syrian Democratic Forces (SDF) has confirmed that it will not be taking part in the Syrian presidential elections.

The Syrian government had requested that the elections, scheduled for May 26, be held in the areas controlled by the SDF in northeastern Syria.

In an interview with Basnews on April 20, Azad Barazi, a leader in the Kurdistan Democratic Party of Syria, one of the parties of the Syrian Democratic Council, said the presidential elections will not take place in the areas controlled by the SDF. He instead called for a dialogue between the autonomous administration and the Syrian government.

Riad Dirar, the co-chair of the Syrian Democratic Council, said the Syrian government has asked that the presidential elections be held in the areas controlled by the autonomous administration. On April 19, he told Basnews that the council “does not have a position on the Syrian presidential elections. This can be discussed at a later time in order to take the appropriate measures. The legitimacy of any elections depends on the people’s support for them. However, the people are now divided. The constitutional issue has not been resolved yet and dialogues are ongoing. The Syrian constitutional committee’s talks cannot be separated from the elections imposed on the Syrian people, which are seen as a perpetuation of the declared policy by the regime, which does not believe in any solution except its own.”

A member of the council told Al-Monitor on condition of anonymity, “During the negotiations between the Syrian regime on the one hand and the autonomous administration and the SDF on the other that took place in Damascus in early February, attempts were made by both sides to reach an understanding regarding the elections. The regime called for setting up ballot boxes in the eastern provinces. Although we agree with the regime on essential points, including the unity of the Syrian territories and the need for a political solution, consensus has yet to be reached amid the regime’s refusal to recognize the autonomous administration…. We will not allow the regime to hold elections in our areas of control. Our position on the presidential elections will be the same as the one on the parliamentary elections held by the regime last year. Back then, we prevented the regime from setting up ballot boxes in our areas of control and publicly rejected these elections.”

The council member continued, “Although we will not allow elections to take place in our areas of control in light of the local community’s refusal to hold these elections, those who wish to participate in the elections can go to the security quarters controlled by the regime and cast their vote in this sham election that the regime is using to avoid the milestones that may be achieved through the Geneva negotiations, to abort the political solution and to stay at the helm. However, these presidential elections will not change anything in the Syrian political situation. The political process remains stalled and the future of the political track depends on US’ [policy toward] Syrian affairs.”

“About 5 million Syrians are distributed between the opposition-controlled areas in both Idlib and northern Aleppo and our areas of control in northeastern Syria,” the council member added. “The Syrian regime will not be able to place ballot boxes in large areas of the country. Also, more than 6.5 million refugees are distributed over 126 countries around the world, according to statistics from the United Nations High Commissioner for Refugees, and this number is increasing. Most of them will not participate in the elections. These elections lack the support of the Syrian people who do not believe this process will solve the situation.”

Abdulaziz al-Khalifa, a journalist for the Baladi News Network, told Al-Monitor, “The Syrian regime has been tightening the noose on the SDF by closing the crossings and preventing the entry of food. This is in addition to the recent clashes between a regime-affiliated militia and the SDF-affiliated Asayish [security forces], and Russia’s temporary withdrawal from some military bases in Tal Rifaat. All these moves mostly aim to force the SDF to accept participating in the presidential elections and keep it from preventing the residents of those areas from casting their votes.”

He argued, however, that the SDF was trying to sidestep these demands by granting the Syrian regime economic privileges such as supplying it with oil.

Khalifa added, “The SDF sees eye to eye with the Syrian regime on many matters such as the opposition and Turkey. The SDF does not aim to overthrow the regime, but rather seeks to impose itself on it and force it to recognize its autonomous administration. This is the main point of conflict between the two sides. Also, the SDF will not accept placing ballot boxes in its areas of its control in northeastern Syria, as it believes by doing so it would be departing from the US position rejecting the elections and helping the regime achieve its agenda.”

He continued, “By asking the SDF to participate in the elections and place ballot boxes in its areas of control, the regime does not aim to recognize the SDF’s autonomous administration and contradicts its own statements. The regime labels the SDF a militia working for the US whose interference in Syria is deemed illegal for not coordinating with the regime. Rather, the regime wants the SDF to allow the residents of its areas to move to the security areas controlled by the regime to cast their votes.”

Khalifa concluded, “The regime will place ballot boxes at the crossings between the two areas and will also place them on the crossings with the opposition-controlled areas, to show that its ballot boxes are set up in all regions and that everyone wants to participate.”

On April 18, the People’s Assembly of Syria announced that registration was opening for candidates wishing to run in the presidential elections slated for May 26 in Syria and May 20 for the diaspora.

The assembly has received notifications from the Supreme Constitutional Court that 18 candidates, including President Bashar al-Assad, are running for the nation's top post.

According to the announcement made by the speaker of the People’s Assembly, Hammouda al-Sabbagh, the registration period specified by the Syrian Constitution and the General Elections Law for those wishing to run for president is the 10 days beginning April 19 and ending April 28.