With little help from the Russian government and a very small chance for asylum, few Syrian refugees travel to Russia. 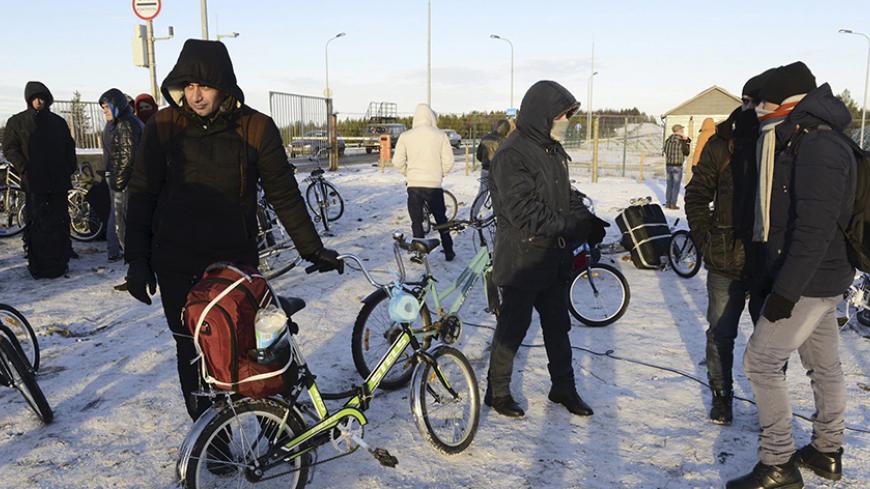 Refugees and migrants gather near a checkpoint on the Russian-Norwegian border outside the Nickel settlement in the Murmansk region, Russia, Oct. 30, 2015. - REUTERS/Fyodor Porokhin

Noginsk, a Russian provincial town about 40 miles from Moscow, is widely known as a place where the first monument to Lenin was established. It is also traditionally known by its industries, especially textile production. Recently, however, the town has become known as the place with the largest group of Syrian refugees in Russia.

Mohammad Al-Fallah, 32, came to Noginsk from Aleppo in 2013. He came to Noginsk, as many others did, to avoid war and with the hope of finding a home and peace. Why Russia? Why Noginsk? Why not Moscow or other big Russian cities? In an interview with Al-Monitor, Fallah said, “The reason is simple — I came here for work. A few years ago, a Syrian businessman opened a textile factory in Noginsk and invited his fellow countrymen to work.” At first, Fallah didn't want to move to unknown Russia, not speaking Russian and having a vague idea of life there. But as the situation in Aleppo was worsening, he made up his mind and left for Noginsk.

Statistics show that Russia is not a popular destination for Syrian refugees. According to the Federal Migration Service of Russia, as of April 2016 (the latest published data), there were 7,096 Syrian citizens in Russia, compared to 2.7 million Syrians in Turkey, 1 million in Lebanon, 655,000 in Jordan, 300,000 in Germany and 100,000 in Sweden, according to United Nations High Commissioner for Refugees (UNHCR) data. A year earlier, in 2015, this number was higher — 8,205 Syrian citizens. In Noginsk alone, there are about 2,000 Syrians.

Russian human rights organization Civil Assistance marks out two groups of Syrian refugees. The first group contains those who came to Russia before the war, but as the war began, they couldn’t find an opportunity to return to Syria. The second group is made of Syrians who came seeking asylum after the beginning of the war.

“Traditionally, very few Syrian refugees come to Russia,” Galina Negrustueva, public information/communications associate with UNHCR-Moscow, told Al-Monitor. “Those who come have either relatives or friends here or used to live or study in Russia, which means they know the Russian language and have an idea of life here.” According to Negrustueva, as a rule, Syrians come to Russia using a tourist visa or an invitation from a Russian citizen. Before their visa term expires, they have to appeal to Russian migration authorities in order to legalize their stay. Theoretically, refugees can receive permanent asylum, but in reality only a few refugees receive this status. “Russia doesn’t give permanent asylum almost to anyone. It is not a common practice in Russia,” Negrustueva said. In the last 20 years, only 799 individuals have been given this status. More likely, refugees could receive temporary asylum, but only for a year. After a year, temporary asylum expires, they have to prolong it for the next year, and they have to do that every following year.

The recent report from Civil Assistance, "Syrian Refugees in Russia," says that from 2011 to 2015, 2,011 Syrian citizens requested permanent asylum in Russia, but only one received it. Syrian refugees requesting temporary asylum have been more successful; out of 4,442 applicants, 3,306 received it. In the first half of 2016, Russian migration authorities did not approve any Syrian permanent asylum requests and refused temporary asylum to 57 Syrian refugees. In most of the cases, the Federal Migration Service of Russia explained its decision as follows: “The situation in Syria has been improving,” referring to information received from Russia’s Ministry of Foreign Affairs.

Fallah, who has been in Noginsk since 2013, had his temporary asylum request refused just two weeks ago. He disagrees with the decision. “How can I return to Aleppo? It is still war there! How can the Ministry of Foreign Affairs recommend it? Isn’t Russia the country that is itself fighting against terrorists in Syria?” he asked.

Those who were refused asylum in Russia try to find other means to legalize their stay. Some Syrians prefer to do it by marrying a Russian citizen (mostly fictitious marriages) or by entering Russian universities. However, some prefer to leave Russia and move to European countries. According to the Civil Assistance report, during 2015, about 5,500 refugees, most of whom were Syrians, left Russia for Norway and about 500 refugees moved to Finland. In November 2015, Norwegian authorities changed the rules of crossing the border and started to deport refugees back to Russia. Since that time, the number of new refugees from Syria to Russia has begun to decline.

To balance its domestic policies in regard to the refugees, Russia actively provides humanitarian aid to Syrians in Syria and neighboring Jordan and Lebanon. According to information provided to Al-Monitor by the Department of Information and Press of the Ministry of Foreign Affairs, in 2016, Russia has provided $300,000 to the UNHCR for Syrian refugees and more than $500,000 to help internal refugees in Syria in coordination with Damascus. In 2013-2015, Russia’s Emergency Ministry took 35 flights to Syria and neighboring Jordan and Lebanon, delivering more than 600 tons of humanitarian aid.

Russian experts believe that in the foreseeable future there won’t be a mass influx of Syrian refugees to Russia. “The fact of staying in Russia shuts the doors to Europe. I think this is the main reason,” Vladimir Mukomel, the head of the Center for Ethnopolitical and Regional Studies in the Institute of Sociology of the Russian Academy of Science, told Al-Monitor. “Russia has no integration programs for refugees. They can’t count on any social benefits there. There are not even state-sponsored language courses for them,” Negrustueva added.

Nevertheless, Civil Assistance and the UNHCR in March organized a school for Syrian refugees in Noginsk. At the school, Syrians can study Russian. On Nov. 21, upon an initiative by the same human rights activists, another school for Syrians was opened in Losino-Petrovsky, a town near Noginsk, 46 kilometers (28 miles) from Moscow, where many other Syrians reside. The representatives of the school told Al-Monitor that the school is organized for Syrian children. Apart from Russian, they can study mathematics, Arabic and other subjects.

by Murielle KASPRZAK and Joseph SCHMID | AFP | May 26, 2022
END_OF_DOCUMENT_TOKEN_TO_BE_REPLACED