Right-wing nongovernmental organizations in Israel have launched campaigns in favor of Syrian refugees, calling upon the government to show that Israelis care about their neighbors being massacred daily. 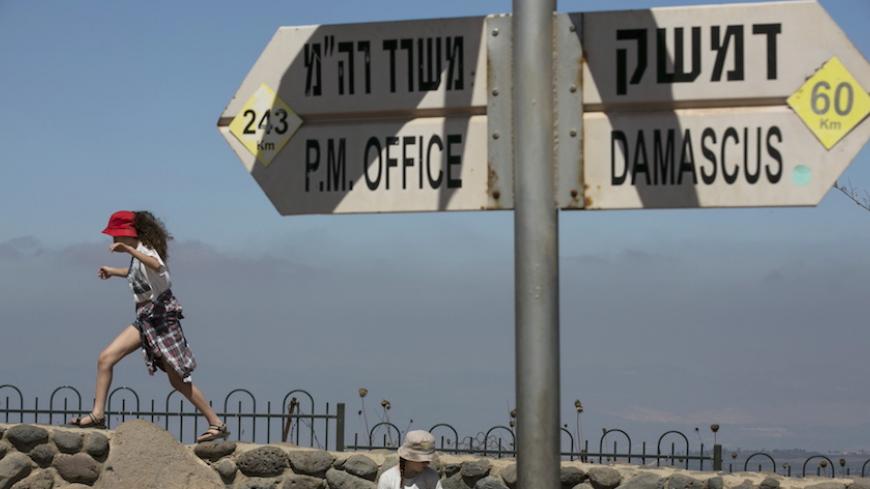 Israeli girls play near a sign at Mount Bental, an observation post in the Israeli-occupied Golan Heights that overlooks the Syrian side of the Qunietra crossing, Aug. 21, 2015. - REUTERS/Baz Ratner

On Jan. 25, Interior Minister Aryeh Deir announced that he had approved the entry into Israel of some 100 Syrian children orphaned in their country's civil war. According to the plan prepared by the ministry, the children will be granted temporary residency, and after four years will be eligible for permanent resident status allowing them to remain in Israel. If first-degree relatives of the children are located at some point, the Interior Ministry will also consider granting them Israeli residency.

Deri came under pressure over the past year from various directions urging him to take some sort of humanitarian action, even if symbolic, proving that Israelis are not indifferent to events across its border. After all, Israel itself is a state of refugees who experienced the Holocaust, and it cannot sit around doing nothing when such horrific scenes are emerging from Syria. So far Israel has treated more than 2,500 wounded Syrians brought to Israeli hospitals, but none were granted residency and all were returned to Syria after their treatment and recovery.

Opposition Chairman Isaac Herzog of the Zionist Camp appealed to the government more than a year ago, in September 2015, saying Jews cannot remain indifferent when thousands of refugees are seeking safe haven. Herzog urged Israel to take in Syrians and grant them a life-saving asylum status. A fellow Knesset member from Herzog's Zionist Camp, Itzik Shmuli, waged a campaign on the issue and called on the interior minister to take immediate humanitarian measures to save refugees, wondering out loud how we had all become so inured to the wholesale slaughter of innocents.

We Israelis have not exactly been indifferent to events in Syria. Since the outbreak of the war almost six years ago, and especially since the massacres in Aleppo, various Israeli organizations have been energized into action. Some raised money for human rights organizations helping Syrian refugees, others mobilized Israeli public opinion in a bid to prompt government action, repeatedly haranguing the government to show its sensitivity to the murder of civilians.

Activists from Israeli human rights nongovernmental organizations have been active in the field throughout the ongoing war in Syria. The Israel Flying Aid organization, for instance, is specialized in life-saving assistance to populations in countries with which Israel does not have diplomatic ties. This organization has launched a crowdfunding campaign titled "The Syrians are on the fences — Israel engages for the children." The heads of the group were astonished at the generous response of Israelis to the campaign. They received 1.3 million shekels ($300,000), more than double the sum they were hoping for.

The engagement of human rights organizations and left-wing groups may seem obvious and a must. But apparently right-wing activists also have started calling upon the government to take action, and have taken steps in that direction.

One of the groups that launched such an extensive online campaign was "My Israel," a right-wing organization founded in 2010 by Education Minister Naftali Bennett, the head of the HaBayit HaYehudi Party, and his fellow party lawmaker, Justice Minister Ayelet Shaked. The group, currently headed by Sara Haetzni, boasts widespread support from tens of thousands of Israelis and the ability to influence the Israeli political agenda.

In an interview with Al-Monitor, Haetzni said there is nothing trivial in members of a movement that views itself as a national, Zionist group mobilizing for the citizens of an enemy state. "But one must set aside the differences and the emotional baggage and stir public opinion to do the humanitarian thing. We knew people would criticize us and we would generate lots of anger within our camp, but it was a calculated risk," she said. As it turned out, they got more support and offers to help spread the word than criticism and attacks.

The idea for the My Israel campaign was the brain child of Itai Reuveni, who works for another right-wing organization called NGO Monitor, founded 15 years ago to follow other nonprofits that claim to be human rights advocates but are, in fact, politically biased toward the left. Reuveni went to My Israel and to other groups, and suggested joint action on the Syrian issue. He told Al-Monitor that he had been exposed during his work to daily reports from the battlefields in Syria and could not remain indifferent.

Nonetheless, Reuveni admits that among the considerations that motivated him to persuade his colleagues in other organizations to take action and to generate pro-refugee public opinion, was the feeling that undertaking such a necessary humanitarian move would prove Israel's sensitivity to refugees, on the one hand, and would expose the hypocrisy of the world, on the other. "The main objective was, of course, to mobilize for the sake of the refugees, but also to show that the world, which is always preaching to us, has proven that it doesn't care that people are being slaughtered every day. More the reason for us to take significant steps and show that we are leading, that we are humane, that we are not indifferent to the genocide occurring on our door step."

Reuveni and Haetzni don't know whether the campaign they initiated and led did, indeed, influence Deri's decision. But there is no doubt that the public sentiment generated in Israel in recent weeks, especially after the horrible massacre in Aleppo, served as a convenient backdrop for it, both among the political left and right, which welcomed the plan to take in orphaned children and babies.

According to the plan, the orphans will be brought to Israel by international human rights organizations active among civilians in the war zones. The Israeli organization Amaliah has already been active. Last September it worked to bring dozens of Syrian children from the Quneitra area bordering Israel for treatment in Israeli hospitals, and then arranged recreational activity for them in kibbutzim in northern Israel. It's safe to assume that the 100 children who will be brought as official refugees are mostly Aleppo residents who lost their parents. According to the recommendations of international human aid organizations, the children will initially live in boarding schools and with foster families in Arab-Israeli towns and villages. They will undergo medical treatment, psychological and rehabilitative counseling, and will start learning Hebrew so they can attend Israeli schools. In four years they could get permanent residency.