The fundraising event in Tel Aviv for Syrian children had a slow start, as many Israelis show apathy to the suffering of their neighbors, but the Israeli committee supporting war-stricken Syrian children is determined to address the indifference in Israeli society. 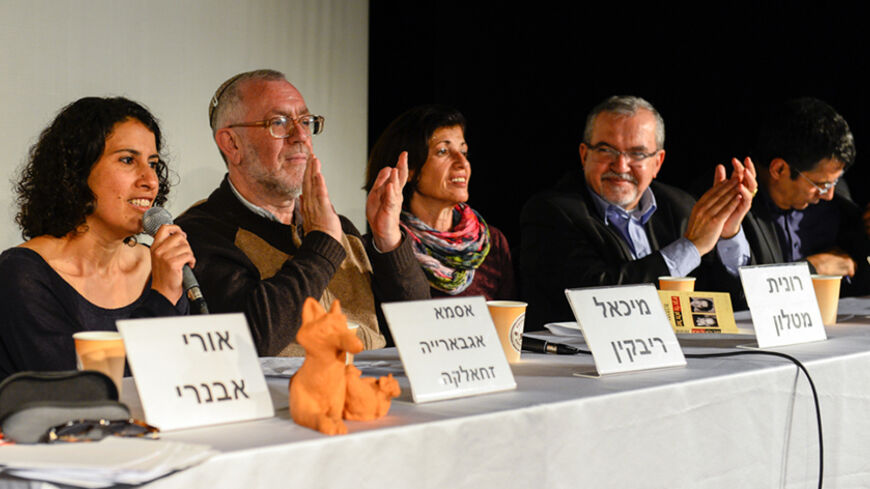 As Israel is shifting to the right and right-wing activists rally in protest of any event perceived as leftist, marginal as it may be, the fundraising event organized in Tel Aviv on the evening of Nov. 30 by the Committee for Humanitarian Aid to the Syrian People — set up to aid the millions of Syrian refugees, first and foremost the children, to get through the cold winter — passed quietly, without public protests or demonstrations.

Reactions on the street to the event ranged from “What a group of delusional people” to “I don't really care what they are doing there.” No one stopped to voice their objections or support. The Israeli public, it turns out, is not really bothered by or interested in the horrible Syrian civil war, which has been raging for the past 3½ years. One of the speakers at the event, Israeli novelist Ronit Matalon, fully aware of the situation, said, “There is no use denying it: We are few.” She was right. The 200-seat auditorium was half empty.

Another speaker, professor Yossi Yonah, whose father was born in Aleppo, told the audience that TV presenter Shai Stern, who was documenting the fundraising evening, had told him: “I cannot understand you. As for me, I couldn't care less about the Syrian people.”

“It's not just indifference; it’s an obstinate lack of concern for the other,” said Yonah. He went on to criticize the State of Israel, which, he said “was sending aid around the world, while acrobatically skipping its neighbors.” However, Yonah ignored the medical treatment provided by Israel in its hospitals to Syrians wounded in the civil war.

Despite it all, the organizers of the event are persevering. One by one, the speakers pointed out that the way in which Arabs and Jews in Israel were joining forces at this time was unprecedented, especially to help the Syrian people. “The event was held not only on behalf of the Syrian people, but also to drive home the message that here, in Israel, Arabs and Jews can come together and join forces for a humanitarian cause,” journalist and political activist Asma Agbariya Zahalka emphatically said.

However, the event had more concrete goals. The Syria Aid Committee began its activity in October, at the joint initiative of journalist Lily Galili and Nir Nader of the Jewish-Arab labor association WAC-MAAN. Their aim was “to take action and break the indifference to the terrible suffering of the Syrian people,” as stated in the committee’s declaration of intention and as reflected in their call “on anyone who values human rights and human justice to join us in an act of solidarity and aid to the refugees of the Syrian crisis.”

Among the committee members are figures such as writers David Grossman and Sami Michael, who were absent from the event, as well as leftist activist and journalist Uri Avnery, Knesset member Issawi Frej (Meretz) and others. Grossman sent a message to the fundraising event, stating: “The aid for the Syrian children, whose lives were wrecked, is simply a human action and at the same time a wonderful deed. It reminds us, amid the frenzy of violence and hatred that is sweeping the region, of the way the ties and relationships between people could be — even in times of war.”

Committee spokeswoman Michal Schwartz told Al-Monitor that the purpose of the event was twofold: “To raise funds from the public, as we have been doing for some time now, and as we will continue to do, and also, to make the Israeli public aware of the events in Syria — especially these days, when the major players in the arena are busy fanning the flames of hatred.”

It seems that the first stated goal — that of fundraising — has not funneled large amounts of money to the committee’s bank account. Nevertheless, its organizers have modest expectations. “There are those who donate a mere 20 Israeli shekels [about $5], since they have no more to give. Yet, so far, we have collected a significant sum of money, and we hope to eventually raise several tens of thousands of shekels,” Schwartz said. The final goal of the event organizers is to reach the sum of 100,000 shekels (about $26,000).

At the fundraising event, donations in the amount of 10,000 shekels (just over $2,500) were collected, in addition to the 30,000 shekels (nearly $7,580) already raised before. The total sum will be given to Save the Children. The organization has been “carefully chosen,” after attempts by the Syria Aid Committee to team up with the Syrian opposition failed, due to the source of the money originating from Israel. The funds raised, which are but a drop in the ocean, should be directly transferred for the welfare of Syrian children living in refugee camps in neighboring countries such as Turkey and Jordan. According to current estimations, these camps host more than 1.5 million children.

The committee members are well aware and understand the "justified" argument, by which this money could have served for the welfare of Israeli children (those from southern Israel, for instance, who suffered most during the Gaza war). Addressing the event, Avnery admitted that he had asked himself this very question. However, as he said, he had realized that “it's not the one or the other, but rather the one and the other alike. Wherever there are children in need, we must help out.”

"He told Al-Monitor, “We are all Syrians,” alluding to the fact that following World War I, Israel had been named "Southern Syria." “You don’t have to justify to assist children,” Avnery said. “There is no difference between a child in Syria, in Gaza, in Beersheba or in Africa. In Israel, there is objection to grant aid even to children in Nazareth, and it’s a tragic thing that I cannot understand. How could it possibly be that a nation of refugees that was in exile for the better part of its history has assumed an anti-refugee, an anti-asylum-seeker and [in fact] an anti-global stance?”

With reference to the above, Yonah said, “It's an opportunity to say that we, too, are being saved here, that we are offered a hand. Come on, act like [compassionate] human beings.”

The same sentiment is voiced by others as well, even by those who did not attend the fundraising event and whose focus is generally on the Israeli population. One of them is Judy Shalom Nir-Mozes, president of the Hom association for children in need, who said that she welcomed “any initiative on behalf of children. The Syrian children are not to blame for the situation they have found themselves in. We, at the Hom association, are helping Israeli children. However, as far as I am concerned, wherever I can contribute to the welfare of children, there you will find me.”

“It was an absolutely ‘bubble-like’ event for a certain crowd,” one of the participants said. “But even so, it was very emotional. For years, I used to shun such events, where the same cliches are repeated over and over again. However, I was pleasantly surprised here. I was thinking of the lofty cause [the event] was standing for.”