Education Minister Naftali Bennett is acting to include works by Mizrahi figures in literature and poetry in the school curriculum. 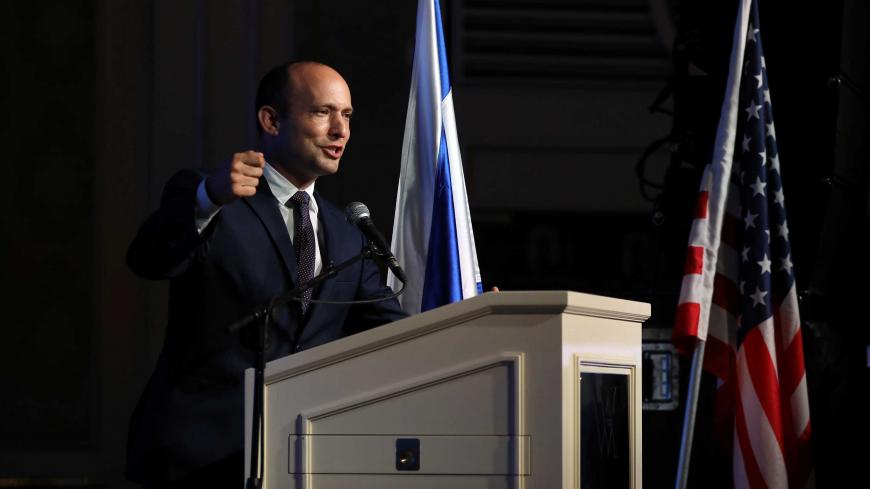 Israeli Education Minister Naftali Bennett speaks during a reception hosted by the Orthodox Union in Jerusalem ahead of the opening of the new US Embassy in Jerusalem, May 14, 2018. - REUTERS/Ammar Awad

“The inclusion of important Mizrahi [Middle East and North African] figures in literature and poetry in the school curriculum is a welcome development, but it is not yet clear whether they will be part of the required curriculum,” Knesset member Yossi Yonah of the Zionist Camp, told Al-Monitor. Yonah, a professor of the philosophy of education, continued, “I know that in many cases, studying these works by Mizrahi authors is optional, and that many teachers simply chose not to deal with them.”

Yossi Yonah was speaking in response to an Aug. 28 interview by Education Minister Naftali Bennett with Yedioth Ahronoth, in which Bennett announced that his “Mizrahi revolution” will be taken up a notch in the school year slated to start Sept. 2.

Bennett was referring to the implementation of some of the conclusions reached by a committee headed by the poet Erez Biton. Appointed by Bennett, the committee was tasked with devising a plan to bolster the identity of Sephardic and Mizrahi Jewish culture in the education system. Its starting point was that the rich culture, heritage and history of these communities are largely absent from the curriculum. The committee submitted its conclusions in 2016.

In the Yedioth Ahronoth interview, Bennett said works by Mizrahi writers and artists depicting the Mizrahi experience will be incorporated into the compulsory curriculum of secondary schools across the country, and teachers will be expected to attend workshops and in-service training sessions to better teach the content. So, for instance, the curriculum will include three works by the poet and Ars Poetica founder Adi Keissar, who is of Yemeni descent, as well as “And the Bride Shut the Door,” the most recent novel by the late Ronit Matalon, of Egyptian descent. Furthermore, particular emphasis will be placed on the legacy of Rabbi Shalom Shabazi, the great Jewish Yemenite poet, since this year marks the 400th anniversary of his birth. Schools will also host events featuring contemporary liturgical poets.

“We realized that the educational system was not giving enough of a voice to the history and culture of a large swathe of Israeli society,” Bennett said in the interview. “We realized that we lost half the story along the way.”

There can be no doubt that this is an important step forward in correcting the structural deficiencies in the current literature curriculum in Israeli schools. Until now, it has ignored Mizrahi identity in favor of European hegemony. The real question is how deep the change will be and how committed the educational system is to seeing it implemented. The point raised by Yonah is important, because until this year, literature teachers had had the opportunity to teach works by Mizrahi poets and authors, but for the most part, they decided not to do so.

As a researcher and activist, Yonah has spent the past few decades at the forefront of efforts to bring issues pertaining to Mizrahi identity to the national agenda. He has published numerous studies on the issue of equal opportunity in education and now serves as a member of the Knesset’s Education Committee, where he helps to oversee the implementation of Biton Committee recommendations.

“I spoke with a woman who teaches literature,” Yonah remarked to Al-Monitor. “She told me that works by Mizrahi authors are not part of the required curriculum, so teachers simply do not teach them.” According to him, if these works are not included as part of the compulsory curriculum, it is meaningless. “If the goal is to change the canon, it is necessary to state unequivocally that the new material is part of the required curriculum and, of course, to ensure that it stays that way in the future.’’

This struggle to address European hegemony in the curriculum, particularly in literature and history, had begun gathering momentum two decades ago, led by Mizrahi activist intellectuals operating in various frameworks, such as the Mizrahi Rainbow Coalition. For a long time, the entire discourse was considered esoteric. It was even thought by some to be whining, although there was nothing more worthy.

As Bennett noted, generations of Mizrahi and Ashkenazi students in the Israeli education system only heard “half the story.” The vast heritage of the Mizrahi Jews of Morocco, Iraq, and Yemen — their poetry, literature and liturgical works, as well as their history, the emergence of Zionism in their communities and their immigration to Israel — was not taught at all, or if it was, only in a very limited way, and sometimes not even in the right context.

Bennett is a politician, so it is obvious that his decisions are also motivated by his effort to appeal to the Mizrahi electorate. Still, he should be credited with taking it upon himself to correct this glaring lacunae in the curriculum and instill cultural justice in the educational system.

There is some basis to the criticism that only a handful of the Biton Committee recommendations are being implemented and that the inclusion of works by Mizrahi writers should be expanded.

Nevertheless, Bennett’s decision is enormously important, if only for the fact that the Ministry of Education, i.e., the State of Israel, is admitting that there is discrimination and that there are glaring gaps in the literature and history curricula when it comes to the Mizrahi narrative. In other words, an entire, important heritage that is an integral part of Jewish history and literature was concealed for years, methodically and structurally.

Bennett’s Mizrahi revolution has won support from the general population, even though many people still don’t understand what is being taught and what the actual innovation might be.

“It sounds like an excellent idea,” the artist Lilach Ben Yaakov of Kiryat Tivon told Al-Monitor. The mother of four children, two of them in high school, Ben Yaakov further stated, “Overall, I’d be glad if they took this opportunity to teach the history and heritage of Eastern Europe and the Arab states from other perspectives as well, such as culture, the arts, the family and demographic shifts. They should move away from wars and conquests and incorporate materials that are both broad and deep.”

In this, Ben Yaakov expresses the same confusion and lack of understanding about the content as do teachers in the education system, who cannot criticize the system at large. Still, Bennett deserves some latitude. After all, he is trying to introduce deep changes to a vast system where it is difficult to make any change at all, particularly when the content being changed has had 70 years to take root. It is unreasonable to approach these changes as organic from the outset. It could take years to implement them, just as it does to change any other historical process.

When looking at the big picture, it still seems as if there are glaring holes and that most of them are structural. It looks like it will take years before this new content is fully integrated and accepted as a natural and sought-after part of the curriculum, rather than something imposed upon it from the outside. What is certain, however, is that the banner has been raised. The struggle for cultural justice and the inclusion of Mizrahim has just scored a major victory, even if it still has a long way to go.