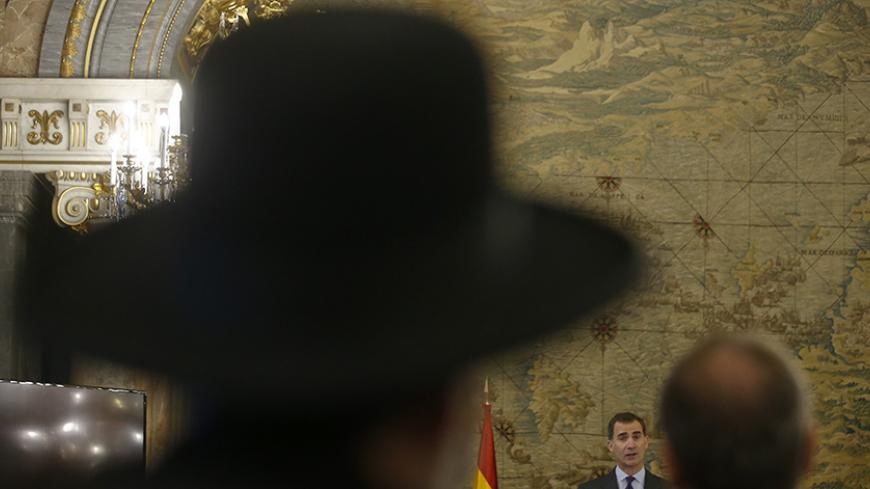 Spain's King Felipe delivers a speech during a ceremony celebrating a law through which Sephardic Jews who can prove that they are descendants of the Sephardic Jews expelled from Spain in 1492 and who maintain a special relationship with Spain can apply for Spanish citizenship, at the Royal Palace in Madrid, Nov. 30, 2015. - REUTERS/Andrea Comas

The Biton Committee — formally known as The Committee for the Empowerment of the Culture of Sephardic and Eastern Jewry in the Educational System — whose recommendations were published July 7, has provoked an expected and populistic debate full of ignorance and harsh criticism.

It’s a shame, because the Biton Committee is one of the most important things that has happened here in recent years in all that relates to the attempt to create a common national and cultural narrative that does not prefer one group or erase the other.

The Biton Committee is the complete opposite of the shallow Mizrahi (Middle East) discourse led by Minister of Culture and Sport Miri Regev — who is of Mizrahi origin — in the attempt to speak to the heart of her electorate. The committee aimed to fix things in a constructive way, not a loud and factional one.

Minister of Education and Chairman of HaBayit HaYehudi Naftali Bennett established the committee, which began its work in February. Bennett is a politician who often ventures into the arena of populism, and it could be that this move was also motivated by a cynical worldview that seeks to wink to the Mizrahi electorate — as was his failed attempt to recruit the former soccer star Eli Ohana in the 2015 election. But we should put political intentions aside in this case and praise Bennett for initiating the composition of an important document that could make real change. Bennett will have to prove that he is serious by ensuring the implementation of the committee's main conclusions — in other words, fight for the allocation of the funds necessary to implement it: about half a billion Israeli shekels ($130 million).

Poet Erez Biton was chosen to lead the committee. He is a native of Algeria, a recipient of the Israel Prize for Literature and a figure within the Israeli consensus. The path he paved for the committee did not go down a road of militant crying, wailing and anger at Ashkenazi [Eastern Europe] culture. It was in fact the opposite. There’s room for everyone in the Biton Committee’s recommendations.

In Biton’s words, “We don’t want these things to come instead of the contributions of the Jews of Central and Eastern Europe [to Israeli culture]. We just want to add an experience. I won’t let anyone hurt the study of [famous poets Yehuda] Amichai, [Natan] Zach or [Nathan] Alterman. The report unjustly scares people. In my opinion, it’s very hard for Israeli society to accept the legitimacy of Mizrahi identity. Openness in Israeli society and in the media will occur only if there is agreement to recognize Mizrahi identity’s right to exist to one degree or another.”

Biton said these things in response to the uproar with which the report was received, which was led by figures such as Gidi Orsher, the film critic at Israeli Army Radio. Orsher, in a low and embarrassing post on his Facebook page (with a racist tone, claiming that Sephardic Jews reject integration), let out his own demons and fears, and fell like a ripe fruit into the hands of Regev.

The debates around Orsher and the justified calls to fire him overshadowed the committee’s conclusions and a serious discussion of its findings. Regev, instead of talking about the importance of the document, produced declarations such as “these are the dying breaths of the old elite; I won’t stop until this racist elite is removed from its assets and its positions of power.”

It’s clear that the vast majority of people reacting from both sides did not read the Biton Committee’s report in full, which tells in over 360 pages a story of the neglect and exclusion of Mizrahi culture from curricula at schools and institutions of higher learning. We can also find a roundabout answer to the defiant question of whether or not there are thinkers, poets, writers and musicians in eastern lands that are worth talking about. The answer, of course, is that there are, and the very question can be attributed to, among other things, the fact that the necessary resources were never dedicated to comprehensive research that could serve as a foundation for including new content in the education system. Unfortunately, the cultural revolution Minister of Culture Regev is trying to enact is ultimately expressed in an embrace of Eyal Golan, a popular Israeli singer. Again, it’s a shame, because beyond the medieval Spanish poets Regev loves to wave around — those who are indeed learned about at high schools — there’s a lost treasure of culture that hasn’t been studied by researchers and thus are unknown to the public.

For instance, the committee recommends adding a series of important works to the curricula, thus giving a significant place to Mizrahi culture. Examples of important works the committee recommends to add to the list of books among which educators can choose to teach are “Yesimon” by Yitzchak Shami, “Etnan” by Yehuda Burla, “Little Brother” by Ronit Matalon, “Until the Whole Guard Passes” by Leah Aini and “The Akedah” by Shoshana Shababo.

Educators in Israel are also obliged to teach translated literature. The committee recommends that the list of translated books to be taught also include the following: the translation from German of "Blindness" or "Voices of Marrakesh" by Elias Canetti, a Nobel Prize winner; a translation from French of "Solal" or "Book of My Mother" by Albert Cohen; and a translation from Arabic of "The Day that the World Conceived and Miscarried: Iraqi Stories" by Samir Naqqash.

The committee recommends the establishment of museums for different ethnic groups, naming government institutions and streets after Mizrahi cultural figures and changing the makeup of the Council for Higher Education to be 50% Mizrahi. But what made the headlines was a marginal recommendation that was not even included in the final conclusions: to organize school field trips to the graves of Mizrahi holy men. The populism monster was fed in Orsher's and others’ wild behavior on the one side and Regev and her like on the other.

Knesset member professor Yossi Yonah of the Zionist Camp, a son of Iraqi parents, praised the committee’s conclusions. In a conversation with Al-Monitor, he said, “It’s an important step that seeks to build something in common. A document full of good intentions, but it became a pasture for factionalism and ethnic war. It could be a historic, missed opportunity, where a great correction could be made for restrain and moderation of intolerance to create a common ethos and cultural home.”

Yonah says he only recently learned that his parents came from Nahardea, a Babylonian city that was an important center of Judaism in the days of the Second Temple (516 B.C.-A.D. 70), and in the Mishnah and the Talmud (collections of Jewish holy texts). Yonah says the members of the committee “did not seek to make a factionalist statement; they’re trying to create a new mix of Israeliness so that in the process of socialization Israeli citizens could enjoy the abundance of cultural and historical resources — but then came the counterattack of primeval fear.”