How Did Yachimovich Lose The Israeli Center to Lapid? 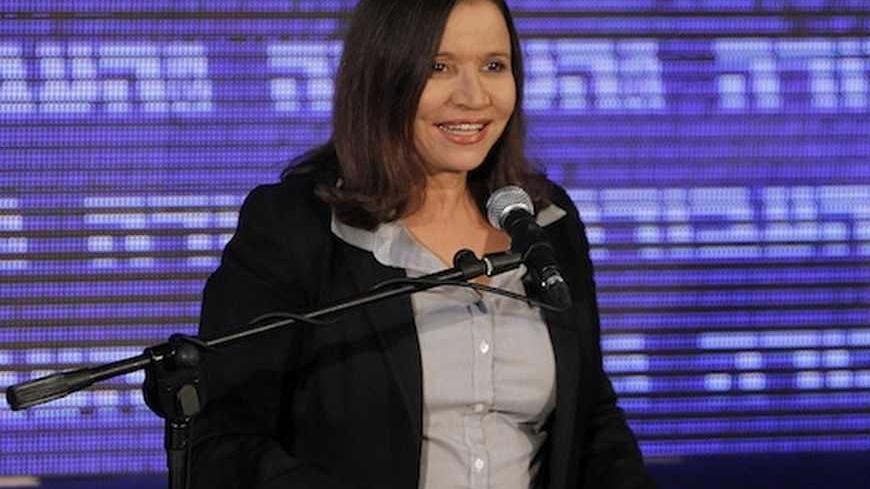 The most resounding failure in the recent elections has been attributed to Labor Party head Shelly Yachimovich. Yachimovich, the leader of Israel’s social-democratic party, neglected the political banner for almost total preoccupation with socio-economic issues. She was supposed to provide the natural home for the hundreds of thousands of citizens who pitched tent encampments on the boulevards and demonstrated on the city streets in the summer of 2011 — and she was the one to receive the most resounding slap in the face. Even more painfully, those same people voted in droves for Yesh Atid head Yair Lapid — who hadn't been at all important during the protest days.

Yes, Yachimovich managed to recruit three of the most prominent protest leaders into her party: Stav Shaffir, Itzik Shmuli and Professor Yossi Yonah. But she failed in the real test: she failed to convince the public that she has the answer to their problems.

Now that the initial shock has dissipated, the fundamental question has become clearer: How did Yachimovich lose those hundreds of thousands of social-protest votes? And why did they follow Lapid, who is identified with the country’s rich?

The first, simple answer is that Yachimovich, as leader of Israel’s main leftist party, couldn't do what Lapid, at the head of a centrist party, did: abandon the political banner, and stubbornly shake himself free of the political discourse surrounding the subject of the settlements and territories. That caused her to lose an important segment of voters that migrated to Zahava Gal-On's Meretz party or Tzipi Livni's Hatenua party, both of whom waved the banner of political compromise.

But this conceptual mistake doesn't fully explain her tremendous failure. The failure was because Yachimovich, unlike Lapid, never spoke to the central backbone of the protest movement. Her war against tycoons and her occasionally aggressive rhetoric against Israel’s wealthiest families, and against the capitalist system in general, deterred large swaths of the middle class. Her program for raising taxes on the well-off classes did not impel the protesters to identify with her, but distanced them. In Israel of 2013, it turns out, “socialism” is still a derogatory nickname.

Most protests didn't call for persecuting the rich (the “tycoons” as they are derogatorily called) or for imposing a welfare state, but instead searched for something that could represent their afflictions in an authentic matter. Lapid, unlike Yachimovich, saw that while the protest was started by a small group of social activists on the left side of the political map, headed by Daphne Leef, the hundreds of thousands of demonstrators that followed them belong to the center.

Unlike Yachimovich, Lapid accurately segmented this public — its needs, frustrations, desires — and then went into the field. For a year, he met personally with tens of thousands of people in parlor meetings and at conferences, sometimes hopping among multiple places in a single day. He met with some of these people several times and built a giant army of volunteers. They turned into the soldiers of his campaign, and soldiers of the middle class.

Yachimovich also had volunteers, and she also went out into the field. She is no less industrious and diligent than Lapid, but the leader of the Labor party did not succeed in perceiving what the general public really wants. She erred by talking in the activist language of the protest leaders. Lapid, on the other hand, understood the great gap between the agenda of Leef and Stav Shaffir — the goal of nothing less than a social revolution — and the public — no stranger to the concepts of competitiveness and capitalism. Lapid was wise enough to translate this insight into mandates.

To understand the depth of Yachimovich's blindness, we must return to the summer of 2011. That was when Israel experienced a historic social awakening that caught it completely by surprise. At the height of the protest, approximately 400,000 people took to the streets in a series of demonstrations that continued for weeks on end. Members of the middle class went out with their small children and protested the cost of living and the shattered dream of a four-room apartment.

Kadima pollster Kalman Geyer discovered that roughly a quarter of the Kadima voters in 2009 were protesters — 200,000 out of 750,000. Next to them marched about 100,000 Labor voters, which represented about a quarter of the Labor electorate. The critical mass of the protesters was concentrated in the left-center, and even more were Kadima voters. Indeed, that summer marked Kadima’s breaking point from which the party has never recovered. In those days, Lapid was still a presenter on a popular television show, and Yachimovich began to win the public’s favor. This momentum helped her to win the title of chair of the Labor party. But what worked for internal primaries did not work in the general elections. The middle class preferred the elevator music played by Lapid to the protest songs of Yachimovich.

“Why did this happen to you?” I asked Professor Yossi Yonah this week. Yonah had been one of the most fluent and reasoned speakers of the tent-protest movement, and was number 21 on the Labor electoral list — a spot still considered “realistic” after the primaries.

“I also ask myself why the public streamed after Yair Lapid and did not come to our side," Yonah says. "Why we didn’t succeed in causing the sons and daughters of the middle class to come to us. I assume that one of the reasons is that a significant proportion of the middle class feared our social-democratic agenda. It looked radical to them.”

Yonah adds, “The half-a-million people who went out to the streets are the sons and daughters of the middle class. This was the accusation of the middle class and we, it seems, didn’t speak to them. They didn’t view us as their natural representatives because we formulated a program that provided an overall solution that also addressed the weaker groups.”

So to whom did Yonah speak, since the weaker groups voted for Shas or Likud-Beiteinu? "That is really a very good question," answers Yonah, with a certain amount of self-deprecation. "I don’t cast the responsibility on Yachimovich, but on us all. The public did not want social-democracy, but 'improved capitalism.' They told themselves: We work hard and expect to be rewarded for it. In essence they said that the capitalistic contract between them and the state was violated, and they seek to re-formulate it in a fair way. Yair Lapid hit the bull’s eye when he talked about those who contribute but don’t receive, those who serve in the reserves and work hard and are not compensated."

"We told them: No new and improved capitalistic contract can extract you from this situation, even if your salaries rise. Because if there is no welfare-state, there is no middle class," says Yonah.

So he failed, big time? “There is no doubt that this was a missed opportunity," he responds. "A resounding failure. We tried to speak in the name of the middle class and we were not successful. It is clear that we had the historic opportunity to rake in Kadima’s mandates, the party that smashed to smithereens. This cannot be denied. We will have to work even harder to explain to the people about the connection between the middle class and the welfare state. I say this as a fact-based point of view: The world’s middle class thrives only in countries in which the state takes responsibility for providing public services to its citizens.”

In spite of everything, Yonah is convinced that the public that voted for Yesh Atid will soon be disappointed. "Lapid has no real commitment toward the middle class but to the large corporations and companies. What happened here, at the end? The social protest movement brought about a situation in which three neo-liberal leaders, or more precisely three male neo-liberals, will lead the country. These are Netanyahu, Lapid and Naftali Bennett. This group of three cannot provide answers to the problems of the middle class. And this is the middle class that will experience the imminent cut-backs and painful decrees firsthand."