Ahead of the upcoming elections, social activist Yossi Yonah argues that the economic-existential concerns of the average Israeli worry him more than the issue of negotiating with the Palestinians. 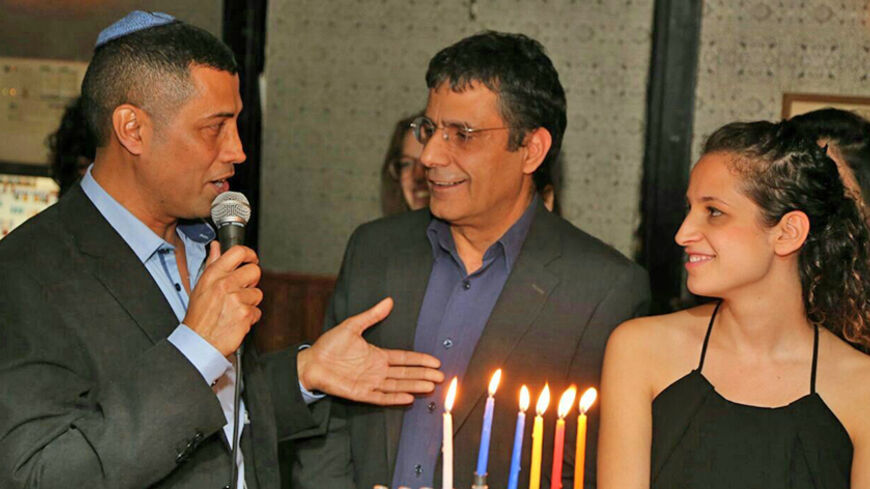 Yossi Yonah begins his campaign for a seat on the Labor Party's Knesset slate in Tel Aviv, Dec. 22, 2014. - Mazal Mualem

At a popular bar in Tel Aviv, professor Yossi Yonah began his primary campaign on Dec. 21 — the sixth day of Hanukkah — for a spot on the Labor Party ticket.

“We were cheated out of the recent elections. We came to promote a social agenda but false prophets were enthroned instead — [former Finance Minister] Yair Lapid, [Minister of Economy and Trade] Naftali Bennett, [Prime Minister Benjamin] Netanyahu and the capitalists. Now it’s time for a reform and I want to be part of the team,” Yonah told the dozens of young activists who huddled in the bar. The event took place not far from Rothschild Boulevard, where the social protest, aka the tent protest, broke out 3½ years ago, changing the face of Israeli politics.

A die-hard socialist, Yonah was immediately drawn into the activism that washed over the streets, finding himself leading a team of independent experts who advised the leaders of the protest. It was in that atmosphere of change in 2013 that he vied for the first time for a seat in the Israeli parliament. However, he came in the unrealistic 20th slot and did not make the cut.

Now he’s having a second go at it, potentially finding himself on the same Knesset slate with the person he scathingly criticized during the protest — professor Manuel Trajtenberg, the chairman of the Trajtenberg Committee, which was established in the wake of the demonstrations.

In his new book “Cracks in the Wall,” due out in a few months, Yonah analyzes the 2011 protest, putting it in historic and global contexts. His conclusion is that even though the protest did not achieve its goals in the short run, it nevertheless started a fire that cannot be put out. That’s why it will have an effect on the upcoming elections and the ones thereafter. Yonah is certain that social struggles will continue to resonate and dictate changes.

In an interview with Al-Monitor, Yonah expressed hope that the unification with former Justice Minister Tzipi Livni will not divert the Labor Party from its social-democratic path, because “the economic worries are very acute, so much so that citizens, before thinking of making peace with [Palestinian Authority President] Mahmoud Abbas, first think of how to make peace with their meager paychecks.”

Al-Monitor:  In the previous elections, the Labor Party, under the leadership of Shelly Yachimovich, raised the social-democratic flag in the spirit of the protest. Now, after the unification with Livni, aren’t you concerned that the social agenda you’re promoting will become less relevant?

Yonah:  Absolutely not. The social agenda is even more relevant now. After all, the economic situation hasn’t improved for most people. The housing problem has worsened. The Yesh Atid Party, which was boosted by the protest, turned out to be a failure, having misled voters with empty slogans. Yesh Atid was one big hoax and the same danger looms in the upcoming elections, too. I’m referring to [former Minister Moshe] Kahlon’s party. After all, he, too, is part and parcel of the economic elite.

Recently, the Israeli organization Social Guard looked into Kahlon’s voting record on social issues, and his track record left a lot to be desired. While the cellular reform was important, it was, however, a reform that targeted capitalism. That’s important and positive, but it’s not enough. What about the state’s responsibility to give its citizens a safety net and provide them with proper education, health services and housing? This is the kind of a social-democracy outlook that Kahlon doesn’t have.

Tzipi Livni represents a certain electorate and can help to bring back traditional Labor Party voters who used to be part of the Labor movement but have veered to the right: the centrist middle and upper-middle classes. This is part of the mosaic and that’s perfectly fine.

I see myself as someone who genuinely crosses ethnic, class and cultural borders, perhaps even age barriers. In the last elections I got most of the votes in Tel Aviv and the development towns.

Al-Monitor:  And what about professor Manuel Trajtenberg who will have a secure place on the Labor Party’s slate? During the social protest, when he was appointed chair of the Cost of Living Committee, you said that he was serving Netanyahu and then-Finance Minister Yuval Steinitz but not the public. Now he’s being portrayed as one of the protest’s icons.

Yonah:  To my mind, Trajtenberg is not an icon of the protest. He rose to public prominence because of the social protest. It is no secret that the alternative team of experts, of which I was a member, was opposed to the recommendations made by the Trajtenberg Committee. What I conclude from him joining the Labor Party is that he, too, has come to the realization that Netanyahu deceived the public and that he has likely changed his mind significantly, enough to join hands with our social-democratic forces.

I truly hope that the fact both he and Livni teamed up with the Labor Party shows that they have reached the insight that oppressive capitalism can no longer hold water; that they underwent an internal process that ultimately brought them to the insight that there’s no other way but to strengthen the social safety net in terms of housing, education and labor rights. In this regard, the Labor Party is the largest and most dominant party. Those who join it should therefore be expected to embrace its values.

Al-Monitor:  You’ve been closely monitoring the effects of the protest, claiming that it’s still not over. To what extent will the public’s disappointment with the lack of change affect the upcoming elections?

Yonah:  There's unrest and frustration is running high. Yet alongside the disappointment, I also recognize renewed hope among people. I see the coming elections as another opportunity for politicians to show the younger generation that change is possible. That’s why we shoulder a great responsibility not to miss that opportunity, especially from the Labor Party’s side, because if we do, more and more sectors will feel estranged from the society in which they live, and that could prove to be a political tragedy. This will be a sign that the fabric of our society is unraveling.

Al-Monitor:  What about the diplomatic flag that has now taken center stage in the Labor Party?

Yonah:  Despite the diplomatic paralysis, in the end what citizens are interested in are their economic problems — the meager paychecks, mortgage payments and retirement savings. These are existential concerns and under such circumstances the ordinary people, before thinking of Mahmoud Abbas as a partner for peace, think about how they can live in peace with their measly salaries and existential worries of living in dignity. That’s why I hope that we — as a party — will run on this ticket. We’re getting a second shot, and we must not miss it.

“Anyone but Bibi [Netanyahu]” is a prerequisite and fundamental condition for change, but it is not enough. As someone espousing a social-democratic worldview backed by professional knowledge, I say that “Anyone but Bibi” should be filled with substance of what we want in his stead. What we aspire to is a society that does not do away with market economy, but one that also has a progressive social safety net and provides equal opportunity in education. I want to be an agent of those ideas in the Knesset.