Professor Yossi Yonah, one of the leaders of Israel's social justice protest movement, explains why it failed. 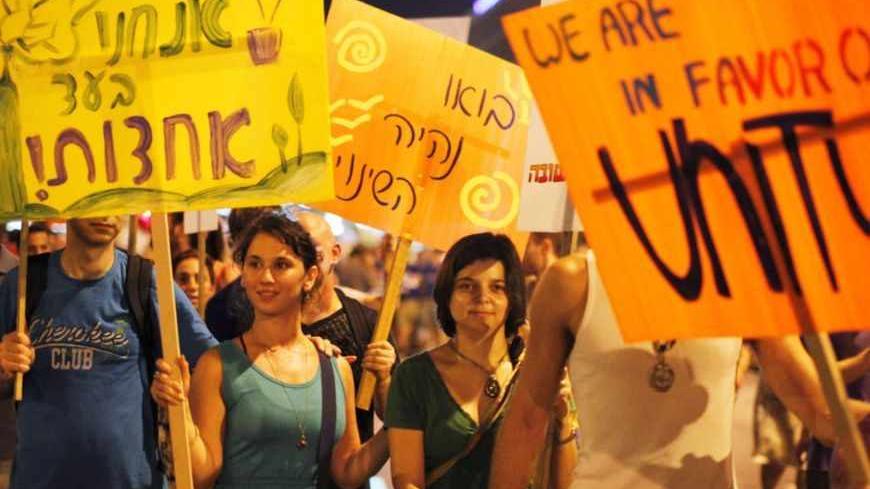 Israeli protesters hold placards as they march on a main road during a demonstration calling for social justice in Tel Aviv, July 14, 2012. - REUTERS/Amir Cohen

“We have failed miserably,” states philosopher-economist professor Yossi Yonah, one of the intellectual leaders of the social protest movement. “Hundreds of thousands of people demonstrated on the streets, but we did not succeed in convincing them that without a comprehensive budgetary policy, no change can take place here.”

This explanation may encapsulate it all: While Finance Minister Yair Lapid, artist of the short, pithy expression, enjoys the political benefits of the protest, Yonah and his friends, with their complex messages and long lectures regarding "proper budgetary policy," have not succeeded in convincing voters.

During the social protest movement in the summer of 2011, Yonah circulated around the tents, fascinated and excited, and marched at the head of every possible demonstration. Then he talked about realizing his dreams, as someone who waited for years for the moment when the public would understand that they are being swindled, and would rebel. Later on he, with economist professor Avia Spivak, headed a team of experts that advised the tent protest leaders in front of the official committees that were founded in its wake. In the recent Labor party primaries, Yonah was elected to the 20th place on the list, but since the party only garnered 15 mandates, Yonah was left outside the Knesset walls. He intends to run again in the next elections.

The “Lapid decrees” bring Yonah back to his element. They are taking him out to the street again, and also provide some insights on the public that it disillusioned, and the Labor party that squandered an opportunity.

Two years after: Did we achieve anything from the largest protest in the history of the state?

“Unfortunately, no. On the contrary, there is regression, except for public awareness on social issues, which is also dissipating. What we see now is a larger deepening of the same policy that led to the protest two years ago. That is the amazing thing. Ultimately, the policy that caused thousands of people to congregate in city squares is the one that still prevails.”

“In many countries around the world, including the United States, there is disillusionment over the view that an ‘austerity policy’ brings economic growth, but in Israel this is still the dominant position. They tell the public that they have ‘to tighten the belt’ for a certain time period, in order to reach economic stability. The socio-economic discourse that President Barack Obama promoted in the United States — an updated social-democratic version — doesn't exist here. By us, there’s only Republicanism.”

And Yair Lapid, what is he?

“He is a good fan. I can’t say about him that he’s a big white lie or an evil person. His worldview is capitalistic. Let’s just say that he’s a naïve capitalist. I mean that he has good intentions, but he is surrounded by a swarm of prompters, affiliated with a specific milieu. These are people anchored to the big money of Israeli society. Let’s be straightforward here. Yair Lapid is a [Prime Minister Benjamin Netanyahu] Bibi clone. He implements a neo-liberal policy. He is the messenger who performs Netanyahu’s dirty work for him. Now the prime minister can ameliorate a decree here and there, and emerge as the compassionate leader, while leaving Lapid in the line of fire. But truthfully, I’m not interested in this political manipulation.”

“The public, as a whole, doesn’t understand economic issues. It voted for Lapid not out of knowledge, but as part of the ‘action-reaction’ mode. There is a crisis, so the Israelis hit the streets. The public wants things to get better without getting into the little details. We, the staff of experts in the protest, explained over and over that in order for things to get better, there must be a fundamental change in economic policy. This is where we failed. The public did not understand that. I admit that even then, I didn’t think that the change would take place in a minute. We are talking about long-range processes and gradual changes.”

Yonah adds, “Our tragedy as a society is that our values of solidarity and mutual assistance have disappeared. They become valid again only when we are dealing with collective military threats. There is a big distortion here, because the casualties that fall on the social battleground in Israel are no less than the causalities on the military battlefield. I am talking about those whose life expectancies are shortened because of inferior medical services; people who find their deaths due to rising crime, and because of economic hardships.”

Do people even have the strength to go out and demonstrate again?

“I went out to demonstrate, of course, because I feel committed. I am part of this amorphous community called ‘the Israeli protest community.’ It is hard to know what is in store for us, whether the protest movement will take off again. I can only say that the conditions are even more ripe now for wide-scale popular protests, because now the element of disillusionment has entered the picture. There is the sense of being deceived. The public thought it had found some kind of savior and followed him, and suddenly it has become clear that it was a false prophet.

“I have no way to estimate to what extent the protest will attract masses of people this time. Masses might come, as they might stay at home. An element of despair and frustration exists, a public that feels that what was promised is not important. Economics remains in the hands of the economic junta that takes advantage of the crisis in order to assimilate its neo-liberal policy even more deeply.”

Yonah serves as professor of philosophy of education in the department of education at Ben Gurion University of the Negev. He was one of the founders of the Mizrahi Democratic Rainbow-New Discourse movement, acting to narrow the gaps in Israeli society; he is also a board member of Adva Center, which monitors socioeconomic equality in Israeli society, and is a senior research fellow at the Jerusalem Van Leer Institute. In the past, Yonah was even one of the heads of the Geneva Initiative.

You are part of the party that was supposed to be the address of the protest. Maybe the public does not understand what you are saying. The messages are very complex. Are you left or right?

“By default, the Israeli public is closer to capitalism. Even with regards to diplomatic issues, we saw that the Labor party’s preference in the elections was to go towards the right. Because ‘if that’s what the public wants, let’s not fight it.’

“In addition, the Labor party today does not have enough internal power to lead this mission. The party is very fragmented, divided into opposing camps. Unfortunately, it is very hard to work cooperatively even amongst ourselves, that’s why the anger against Lapid may help us.”

Where did you fail in the elections?

“We weren’t prepared properly for the elections. The Labor party entered the recent elections on the background of a bleeding intergenerational struggle that led to paralysis of the local branches, in many cases. I believe in politics that is firmly planted in place; I believe in traveling all over the country. That is what I do now, and that is what did not happen in the last elections, also because of Labor Party leader Shelly Yachimovich’ lack of discretion. She tried to advance a revolution of the ‘Young Turks.’ But when the young ones took over the party, they didn’t know what to do with their power. Therefore, on Election Day, the sound of silence prevailed in most of the Labor party branches. Impotence.”

How would you define the supreme goal of the protest?

“The purpose of the protest is to lead to political instability. That is the best thing that could happen. When the politicians will understand that the crisis is very deep, and the public’s lack of faith in their representatives is not a temporary one, only then will the changes begin.”

Meanwhile the politicians understand that everything is going over quietly.

“I look at Lapid’s party and am convinced that it won’t remain silent forever. Now Lapid rules his party incontestably, and his ministers are doomed to silence, but as the waves of protest grow, the silence will be violated. There will be people in Yesh Atid who will distance themselves from Lapid. I don’t believe, for example, that Welfare Minister Meir Cohen from Dimona will sit by silently, the moment that he will see how the cycles of poverty enlarge on his watch. Ditto for Health Minister Yael German. I believe that there will be agitation.”