The recommendations of the Elalouf Committee to Reduce Poverty are too ambitious to be fulfilled, and at the same time ignore the core structural problems that brought Israel to this situation. 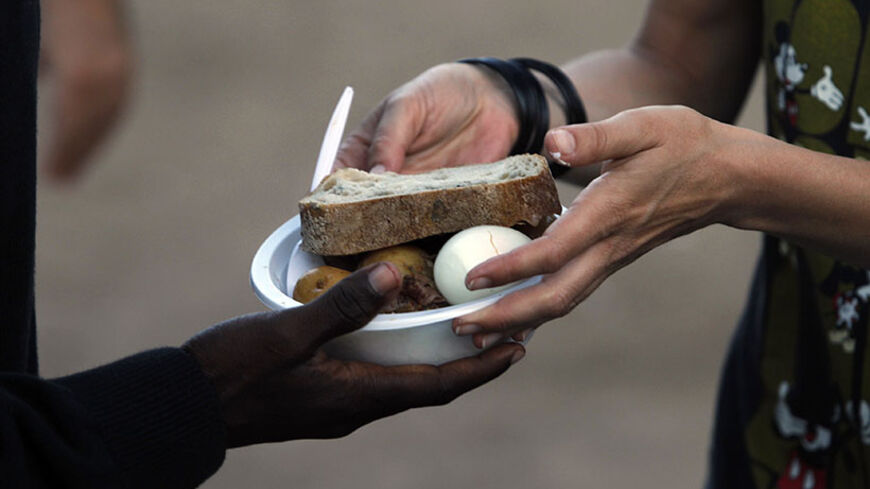 A migrant receives food from a volunteer in Tel Aviv, June 6, 2012. - REUTERS/Baz Ratner

The most potent indication that the conclusions of the Elalouf Committee to Reduce Poverty in Israel will fall apart and ultimately get buried can be seen in the tepid, premeditated response of Finance Minister Yair Lapid to the report’s release on June 23. The Yesh Atid Party chairman is fully capable of using his rhetorical skills when he's trying to convince his listeners that some issue or other is near and dear to his heart and that he plans to fight for it. Nevertheless, his response to the report was cautious and calculated — even though it was commissioned by Welfare Minister Meir Cohen from Lapid’s own party.

Yesh Atid held a faction meeting shortly after committee Chairman Eli Elalouf submitted the report to Cohen at a well-publicized event. During the meeting, Lapid announced: “We will study the recommendations of the Elalouf Committee in depth with the goal of introducing some of its recommendations into the 2015 budget. We will look into ways of translating the report into a long-term plan over the coming decade, to reduce gaps in Israeli society.”

As finance minister, Lapid is well-aware that he will not be able to budget even a quarter of the committee’s ambitious recommendations, which are estimated to cost between 6 billion and 7 billion shekels per year ($1.75 billion to $2 billion). That would be absolutely impossible, especially with the Finance Ministry preparing to make cuts to the 2015 budget. Based on Lapid’s comments, it's obvious that he has no plans to fight his own ministry’s bureaucrats or the government for the billions of shekels necessary to implement the Elalouf report.

At the same time that Lapid was making his halfhearted remarks, senior Finance Ministry officials were quick to announce that the committee’s conclusions had no basis in reality. It was the opening shot in a salvo of sharp responses to the committee. Surprisingly, most of these came from the social opposition in the Knesset. Challenges to the conclusions from Labor Party Chairman Isaac Herzog, Knesset members Shelly Yachimovich and Stav Shafir, along with a finance minister who is not at all eager to implement the conclusions and a prime minister who ignored the report entirely, are a lethal combination, impeding any chance of the recommendations being carried out.

The sparse media coverage of the committee while it was working and even on the day the report was released indicates that there is little public interest in a problem that threatens the integrity of Israeli society. The number of people living below the poverty line is estimated to be 1.8 million, while about 20% of all families are described as poor.

The Elalouf Committee was founded eight months ago to recommend a series of steps to reduce the high number of people in the country living below the poverty threshold, which makes Israel one of the poorest states in the Organization for Economic Cooperation and Development (OECD). Elalouf, a native of Morocco, has been intimately familiar with Israel’s social problems since the 1970s. It was an appropriate appointment, which sent a message to the public, as did the appointment of academics specializing in various aspects of welfare. The committee’s strength should have been its professionalism and the fact that it was not dependent on politicians.

Unfortunately, it was those very features that also weakened the committee. Apart from the minister of welfare, whose ability to ensure that the conclusions are implemented is feeble at best, the Elalouf Committee has no government patron to fight on behalf of its recommendations.

But that wasn’t the committee’s only problem, nor were its problems limited to the criticism over its findings. The Elalouf Committee was destined to fail from the day it was conceived since it chose to focus on the symptoms of poverty, rather than on the core structural problems that cause it. Poverty cannot be resolved just by expanding the budget to hire more social workers, granting free dental care to children, increasing assured income grants and introducing a ban on disconnecting water and electricity to the poor. Those are all important steps, but they will not help without structural reforms accompanied by a clear definition of the budgetary sources. To achieve effective solutions for poverty, the committee should have been established by the prime minister, not the minister of welfare. The committee should have operated with the full cooperation of the relevant government ministries, headed by the Finance Ministry. Much to its shame, the ministry didn’t even bother to send representatives to the committee’s discussions.

Further, the members of the committee didn’t mention, and apparently didn’t attempt to deal with, the real elephant in the room: Israel’s underground economy. The black market economy distorts all statistical data pertaining to Israeli society, including statistics concerning poverty. The Ministry of Welfare is well-aware that this is not some marginal phenomenon. According to estimates given in private conversations with Social Security, some 20% of their payments are allocated to people who do not deserve them, including families who do not report their income. This phenomenon is widespread throughout all sectors of Israeli society. Citizens are trying to survive in a difficult economy, and hide their income to avoid the rigid taxation system.

According to the OECD report, Israel’s underground economy constitutes 6.6% of the country’s gross domestic product, or about 70 billion shekels (some $20 billion) as of 2012. About half of that amount is derived from construction, real estate and auto repair shops. The phenomenon has an enormous impact on the Israeli economy and on calculating the scope of poverty in the country, but it is absent from the conclusions of the Elalouf Committee’s report.

Nor did the committee mention the absence of a transportation link between the center of the country and the periphery, which is disproportionately harmful to Arab citizens. Another issue that should have appeared in the conclusions is how the jurisdiction of local authorities in Israel should be remapped to make it more equitable and allow settlements ranking low on the socioeconomic scale to pull themselves out of poverty by increasing their incomes from municipal taxes. The struggle by towns like Yeruham for a more equitable division of land resources, which has intensified over the past two years, signifies the beginning of a transformative process, albeit one still in its infancy. So does the impact of finding natural gas off Israel’s shores. The Trachtenberg Committee, established after the social protests, described how its recommendations could be funded. In contrast, the Elalouf Committee ignores the issue.

In media interviews following the release of the report’s conclusions, Elalouf said, “Now the entire government must commit itself to the war on poverty. … Today, we launched a war on behalf of citizens living in poverty. No more can anybody say that they were unaware of the severity of the situation.” Welfare Minister Cohen was no less strident when he declared considerable sums would be invested so that the recommendations would begin to be implemented in 2015, saying, “It is obvious to everyone that we can’t keep ignoring the hundreds of thousands and even millions of people living beneath the poverty line.”

These fine words do not hide the fact that the committee failed to achieve its lofty goal of reducing the poverty level in Israel to the OECD average. It did not list the budgetary sources for its program, it did not provide any creative solutions, and it lacked the audacity to place the significant structural problems plaguing Israel’s economy squarely on the table.