Israel's new national committee on poverty has been asked to propose a comprehensive solution to the alarming increase in Israeli families living below the poverty line, most of them working poor. 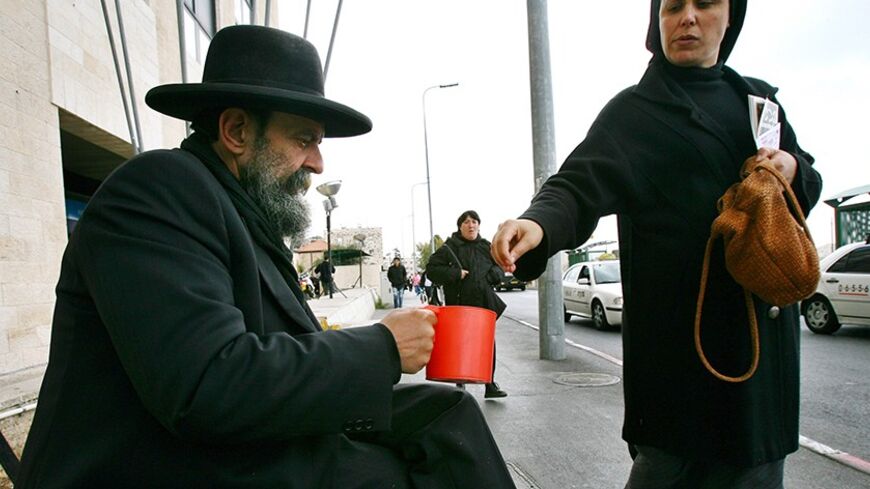 An ultra-Orthodox Jewish man begs for change as he sits on a sidewalk in Jerusalem, March 26, 2006. - REUTERS/Ronen Zvulun

What chances does an impoverished individual have to extricate himself from poverty? And what are the chances that a child growing up in an impoverished family can achieve as much as a child growing up in wealthy family? Are the odds the same for both? Can a society continue to exist indefinitely when there are large gaps between the rich and the poor?

These days, many Israelis are keeping a close eye on a discussion by many wise people looking to find answers to questions that haunt society like a black cloud: Is it possible to fight poverty and defeat it? Is poverty an unavoidable part of life? How can we build a bridge between those who have a great deal of capital and those who don’t have enough to live a decent life?

Behind these questions lurks a great worry. Former Bank of Israel governor Stanley Fischer last June described Israel’s economic gaps as a key threat to the existence of the state, “even more than the security threats,” he said.

Once a year, the National Insurance Institute (NII) publishes its annual poverty report for Israel. This day is always a gloomy one because of the despair that arises over the statistics. On this day, the various media outlets go to great lengths to cover the report. Newspapers devote their headlines to its figures and statistics, and the television channels compete to emphasize stories of people felled by poverty.

About 440,000 families categorized as impoverished live in Israel, or 1.8 million individuals. But the data that keep people awake at night has to do with children. The NII estimated in 2012 that more than 850,000 children live below the poverty line, and wrote the following in an introduction to one of its reports: “Children growing up in poverty will suffer severe effects: low self-esteem and an even lower frustration threshold, a sense of worthlessness, depression and anxiety. In poor families with children, poverty can negatively impact the parental ability to provide adequate nutrition and reasonable sanitary conditions for their offspring.”

Last year's NII report stated that the rate of poverty-stricken households in Israel is high in comparison with other developed countries. While the poverty rate in OECD countries is 11%, Israel’s is 20%, almost twice as high.

On that backdrop, the Israeli government decided in 2013 to appoint a national committee to make recommendations on how to combat and reduce poverty. Social Affairs Minister Meir Cohen appointed Eli Alalouf to head the committee. Alalouf is the former director-general of the Rashi Foundation, one of Israel’s largest philanthropic foundations, which focuses on education. The committee is made up of 60 experts who hail from the academic, business, societal and philanthropic spheres. At the end of March 2014, the committee is tasked with submitting its recommendations to the State of Israel, and the government will then consolidate a new policy to bridge gaps in Israeli society.

In a discussion held by the committee members a few weeks ago, Yonah Rosenfeld, a social worker, discussed a new and dangerous facet of modern poverty. “How can it be that most of the poor are working people and people who have worked all their lives?” he asked. “How is it that a person works for 40 continuous years, and when he retires, he gets trapped in the poverty cycle and cannot live out the rest of his life in dignity?” he added. The NII data show that about half of Israelis below the poverty line are workers who earn less than the minimum wage. In the past, workers were typically able to extricate themselves and their families from poverty with their wages. Today, it seems employment is not a guarantee for escaping the poverty cycle.

Committee head Alalouf experienced poverty personally. He immigrated to Israel alone from Morocco without his family when he was 16 years old. He made his way with great effort and toil, until the day that the State of Israel bestowed the Israel Prize on him for helping hundreds of thousands of children in his role as director-general of the Rashi Foundation. The course of his own life taught him that a combination of forces is needed to extricate a person from poverty, including the state and the impoverished individual himself.

“From my own experience, I say that the person living in poverty must also take initiative and personal responsibility to extricate himself from poverty. On the other hand, the state must provide him with all the tools it has so that he should succeed,” Alalouf told Al-Monitor. “The best route of all is to give poverty-stricken people their own fishing poles to catch the fish themselves.”

The work of the committee is raising high hopes for changing the situation. This would be the first time that Israel has tried to address the problem through a frontal war on poverty. Prime Minister Benjamin Netanyahu announced that he would adopt the committee’s recommendations wholesale. Finance Minister Yair Lapid declared that the necessary funding would be found to implement the recommendations.

A poll conducted last month on Israel’s "Poverty Day," Dec. 17, showed that about half of all Israelis believe the committee should set two key goals: employment with adequate pay and a raise in the minimum wage. Also, most of the respondents noted that guaranteeing public and financially affordable housing have a great influence on poverty.

There are, of course, those who express their doubts regarding the country’s ability, and especially its will, to eradicate poverty. They feel that to achieve this objective, the Israeli economy must abandon its hypercapitalistic approach and return to the welfare economy that governed the country in its first three decades.

“It seems that the Israeli government could have solved the poverty problem if it had adopted a different policy,” Haifa University professor Daniel Gutwein already wrote this week on Black Labor. “Choosing a welfare-state policy would have meant dealing with the poverty problem more successfully. But unfortunately, this government consistently operates to cut the welfare state down to size. The committee for combating poverty is an initiative to sound the final death knell for Israel’s welfare state.”