Israel's fronts are less threatened by real powers than ever before, but Prime Minister Benjamin Netanyahu is increasing the defense budget over alleviating poverty and dealing with the cost of living and housing. 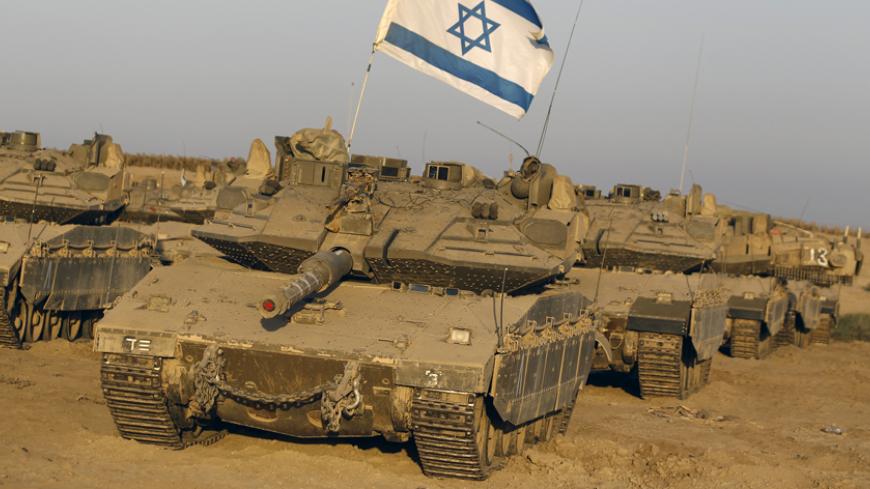 Israeli tanks in a staging area near the border with the Gaza Strip, Aug. 7, 2014. - REUTERS/ Amir Cohen

Except for the military operation against Hamas over the summer in Gaza, there have been no wars between Israel and the Arab states in recent years. In the foreseeable future, too, the Arab world appears so self-involved that the threats against Israel seem to have dropped to their lowest level in decades. Yet, the Israeli government voted Oct. 7 for its biggest defense budget ever. Even during its most difficult times, when the Egyptian and Syrian fronts were active, Israel’s defense spending never came anywhere near the level of the proposed 2015 budget. The ministers voted in favor of 65 billion shekels ($18 billion) for defense. Prime Minister Benjamin Netanyahu steamrolled the ministers into approving an additional 15 billion shekels ($4.2 billion) this year — half of which has already been approved and the second half to be taken from the budgetary reserves designated for emergencies and unforeseen expenditures.

One thing is clear: There hasn’t been such a large defense budget proposal since the establishment of the state. Although most of Israel's fronts are quiet, to the extent of being dormant, the prime minister envisages a grim future for the region, replete with threats of an overall conflagration that could sweep up many of the states in the region. Otherwise, how does one explain the diversion of billions of shekels from civilian and social needs to weapons of war and military personnel? Does the prime minister know of dangers that we don’t? Or does he live in a world of his own?

A defense expert who served in a senior official position recounted that, in all his years in the army and in working with government, he had never seen a prime minister so immersed in defense issues. “God knows, Israeli society is like a cauldron,” he told Al-Monitor. “The Israeli street is seething and most people are looking for ways to survive. And even as the cost of living is skyrocketing and young people cannot afford to even rent an apartment, let alone buy one, and when young couples cannot afford to have another baby for fear they will not be able to support it — the prime minister deems the time right to add billions for defense.”

Last week, while the government was debating the increased defense budget, Eli Elalouf was making his way to the welfare ministry in Jerusalem to find out what was left of the major pronouncements made by the prime minister and finance minister. In the summer of 2013, Elalouf was named to head a newly formed panel tasked with recommending poverty reduction measures. The extent of the poverty threatens to tear apart the fabric of Israeli society. The data are, indeed, ominous: More than 1.5 million people live under the poverty line, along with 800,000 children experiencing food insecurity and uncertain they will be able to get a daily meal. In addition, deep social gaps drove the OECD to strongly recommend Israel to take urgent action to reduce them. Elalouf submitted his panel’s recommendations to the government some three months ago, and Finance Minister Yair Lapid announced at that time that his office would budget more than 7 billion shekels ($1.7 billion) in 2015 to confront Israel’s poverty epidemic.

Upon returning from Jerusalem this week after the government’s budget approval, Elalouf was hard-pressed to mask his dismay. He had found out that less than a third remained of the more than 7 billion shekels promised for poverty reduction. And even the remaining third was doubtful. At a news conference this week with Welfare Minister Meir Cohen, Elalouf said implementation of the panel’s recommendations was being forestalled by the increased defense spending.

And thus, the Netanyahu government’s priorities are revealed for all to see. Military security overrides social security. “Sadly, for reasons we all know,” Elalouf added grimly, “the defense [allocations] lowered the expectations on education, welfare and society. It was no accident that we chose to name our committee the ‘committee to fight poverty.’ This is a war for our society. If social conditions do not improve and the children do not emerge from poverty, the state’s security is in danger, too.”

Only one minister voted against the budget, Environmental Protection Minister Amir Peretz. At the Cabinet meeting he accused the prime minister of increasing poverty and causing grave harm to the weakest strata of society. Those in the know (who followed the meeting) told Al-Monitor that Netanyahu looked at him indifferently, immersed in his thoughts, as though he were not in the room at all.

Other political official sources say the prime minister is devoting all his energies to the security threats — whether real or imagined. Hardly a day goes by that he doesn’t convene a meeting to discuss threats and dangers. He is so immersed in security threats that he cannot find the time to deal with Israeli society. “One of the things that are unique about Israel and do not enable a social change,” Manuel Trajtenberg told Israeli financial daily The Marker this week, “is the fact that 90% of the time, the prime minister of Israel is actually a prime minister for defense and foreign affairs and not for social issues. That is one of the problems we have. There is no one to lead those issues.”

Obviously, Knesset approval of the budget faces a tough and even brutal battle when the proposed spending comes up for debate in the coming months. The opposition parties are expected to go to any length to emphasize the damage to the poor. In the tense social atmosphere prevailing on the Israeli street, the anti-social budget could well herald the dissolution of the coalition. Peretz’s vote against the budget, in addition to the status quo in the diplomatic arena, signal that this government may be nearing the end of its road.