More Israelis living in poverty on eve of Passover

A special report by the state comptroller published the week before Passover reveals growing poverty, attributed to the new government’s public welfare cutbacks. 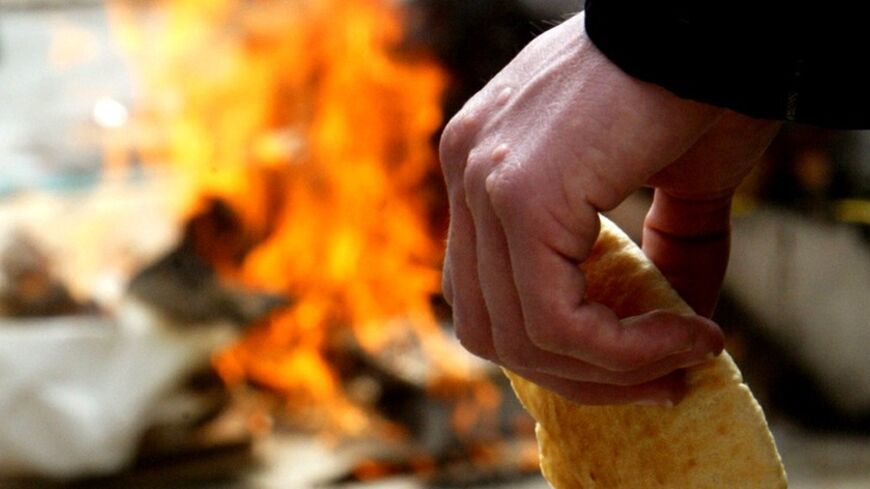 An Ultra-Orthodox Jewish man burns food containing leavening in the Mea Shearim neighborhood of Jerusalem prior to the start of the Passover holiday, April 16, 2003. - REUTERS/Gil Cohen Magen GCM/RKR/SN

Gilles Darmon does not remember having felt such a sense of oppressive distress before on the eve of the Passover holiday (April 14-22). For years, the nongovernmental organization (NGO) Latet (meaning ''to give'' in Hebrew) he heads gears up to provide food to the needy. Every year, thousands of his volunteers are deployed around the country to distribute food parcels to the poor, enabling them to celebrate the Seder with some amount of dignity. This year as well, Darmon supervised the food distribution operation. He was stunned to find out the extent to which the circle of poverty has widened among Israeli families, families that do not have the means to conduct the traditional Passover Seder meal.

Passover is a quintessential Jewish holiday that assembles Israelis in a family-based festival atmosphere. Despite its religious nature, Passover remains the most popular holiday among the public. Secular Jews, like their religious counterparts, customarily gather around the table to celebrate the exodus of the Israelites from Egypt and their emancipation from slavery. Many of them connect the biblical story to current-day events and view the exodus from Egypt as a historical moral that guides the Jewish people to this very day.

However, this year’s Passover celebration has been tainted by recently publicized findings showing that hundreds of thousands will be hard-pressed to celebrate Passover with their families, because they are unable to finance the holiday meal.

In December 2013, Latet published an Alternative Poverty Report revealing an alarming, gut-wrenching social reality. The shock factor increases when reading about the children who happen to be born in underprivileged families. It seems that 37% of children in poor families rely on bread and various spreads for their main nourishment. Out of 532,000 families suffering from nutritional insecurity, 60% reported that they were forced to reduce the composition of their children’s meals due to economic distress. What's more, 46% of the parents reported that sometimes their children did not eat for an entire day, due to a lack of food at home, while 9% of the children were forced to steal food and 12% were forced to collect food from the floor or from the garbage.

“The situation today is more severe than in previous time periods,” Darmon told Al-Monitor. “We go out to the field and serve as 'poverty sensors.' I’ve seen this situation in past holidays, but I don’t remember as depressing a state of affairs as we see today. It’s still some time before the holiday, yet the demand for help is up 20% in contrast to Passover of last year.”

Less than a year after moving to Israel from France in 1995, Darmon founded the Latet organization because he viewed poverty as Israeli society’s most serious problem. Since then, the organization has grown to enormous dimensions. Its yearly budget for 2013 was about NIS 67 million ($19.3 million); it relies on more than 6,000 volunteers throughout the country and distributes millions of food packages every year. Darmon, only 45, is already viewed as one of the most dominant agents in the Israeli welfare system.

The food packages distributed by Latet for the Passover holiday this year will reach more than 60,000 families. “I have roamed around the distribution centers recently, and I must admit that I have encountered very grim scenarios,” Darmon described. “You get to see the impoverished families and the loneliness and despair in which they live. Every governmental social services cutback is felt among the impoverished. I attribute the deterioration this year to the new government’s decision to cut back child benefits. The government makes anti-social decisions and the indigent are the ones to pay the price.”

On April 7, deliberately close to the Passover holiday, State Comptroller Yosef Shapira released a report about government activities to advance nutritional security. The comptroller wrote the following at the beginning of the report: “A society that does not care for the indigent and underprivileged members who live in its midst not only harms their dignity and their rights but also harms the image of the society as a whole. A state that does not properly ensure people’s rights to live with a minimum of human dignity violates its obligation toward the entire society, to honor the basic rights of the human being.”

Sources familiar with the issue say that this is the most concerning report ever composed about the state of poverty in Israel. Shapira states that poverty is not a "decree of fate," and quotes High Court Justice Yitzhak Zamir who wrote, “We cannot allow a situation where the only people who have rights are the ones with full bellies. Everyone must have a full belly. This is a human right.”

Shapira attributes the deepening of poverty to the new government’s policy: Instead of generously bestowing resources on those in need, the government even cut back its former level of assistance. Shapira enumerates the sins of the government, one after another: the lack of real policy toward the weakest sectors of society; a too scanty allotment of resources; anti-poverty measures that are inequitable; the fact that only 12% of the budget for nutritional security has actually been allocated; an excessive reliance on private NGOs and private donors; and cutting back half of the budget financing NGOs that assist the poor. In summary, Shapira also accuses the government of neglecting underprivileged Israeli Arabs many times more than any other underprivileged Israelis.

Meanwhile, the banks and insurance companies publicized the salaries of their high-ranking employees just this week. It emerges that their average yearly salary is about NIS 10 million ($2.88 million). Let's keep in mind that we are talking about financial bodies that oversee public funds.

Paul Samuelson, winner of the Nobel Memorial Prize in Economic Sciences (1970), wrote the following in his leading textbook titled Economics: “Which country today has the greatest equality? … If we confine ourselves to the non-communist world, it has been suggested that the new state of Israel may lead the list.''

It is very doubtful we could find anyone today who would write something similar.