Refugees in Israel dream of freedom this Passover

Israelis and refugees celebrated Passover at the Holot detention center to bring attention to the refugees' lack of freedom and the conditions at the facility. 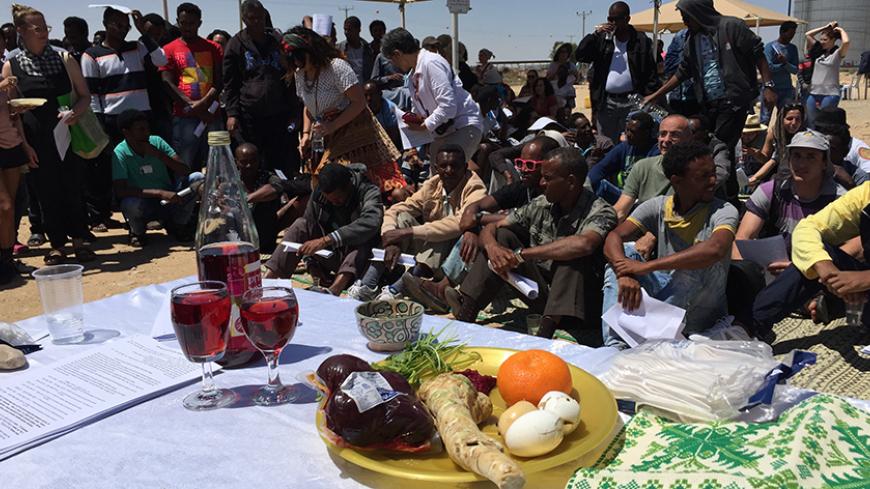 With Passover approaching, Israeli volunteers held a symbolic Passover seder outside the Holot refugee detention center. At the gathering, during which the story of the Jews' exodus from Egypt was told, one of the refugees asked if he could take a moment to speak.

"Israel has experienced many tragedies," said Ayeli Ergai to hundreds of imprisoned asylum seekers, Israelis and human rights activists. "The Jews suffered as slaves in Egypt and during the Nazi regime. Israel of all places should understand what we are experiencing."

Since 2007, a symbolic seder for refugees has been held every year on Passover, the Festival of Freedom. For the last three years, it has taken place outside the walls of Holot, where 3,300 asylum seekers from Eritrea and Sudan are being held indefinitely in subhuman conditions. Ergai's case is just one example of the way Israel is treating Africans who reach the country in search of asylum.

Ergai said that he arrived in Israel at age 13, together with his parents and brothers and sisters. During his almost 10 years in the country, he completed his high school matriculation exams and began studying at the Sapir Academic College. Half a year ago, he was arrested and sent to Holot.

"The Jewish people received its freedom twice," Ergai remarked after the seder, referring to the Exodus and the establishment of the State of Israel. "Yet, it still doesn’t understand what the poor people here are facing."

Ergai identifies as Israeli and is well versed in its history. "Israelis are a racist nation," he said candidly. "You were racist toward the Mizrahi and Ethiopian Jews, and you are racist toward us."

It was obvious that the detainees are well acquainted with certain key features of Passover: the longing for freedom, the comparison to the Holocaust and the duty to remember and share the story of Egyptian oppression with the next generation.

Osman Mohammed Ali, also from Darfur, has been detained in Holot for half a year. "Why am I here? For the same reason you are here," he said. "I fled genocide." Ali is not optimistic. He remarked, "This event won’t change anything, but the least we can do is remember."

The theme of this year's ceremony is the opening line of the Passover Haggadah, which reads, "Let anyone who is hungry, come and eat," signifying the tradition of inviting guests who have nowhere else to celebrate the seder. The theme represents an attempt to protest the poor nutrition provided at Holot. The prisoners used their smartphones to share pictures of the food they are typically served to emphasize how bad the situation is.

Rabbi Arik Ascherman of Rabbis for Human Rights, who helped organize the seder, announced, "With this grape juice, we will sanctify the event that brought us together to celebrate the freedom of the Jewish people and all peoples. We raise the first glass to mark the struggle against hunger here in Israel and around the world."

Asylum seekers have yet to leave the country "of their own volition." Thus said the regime: "It is good for them here, and there is food aplenty." And the regime ordered the prison guards, saying, "You shall not increase their calories, nor shall you allow them to amass food." But the asylum seekers overcame this and built themselves stands to store food, so that they could eat it outside of the facility. Then the regime came at night and destroyed the stands. And the asylum seekers woke the next morning, and they sighed and cried out.

The selection is referring to food storage stands set up and maintained by the detainees outside the facility and also to the Israeli authorities' destruction of them. The refugees sleep at the facility and eat breakfast and dinner there. Some leave during the day to work, so they created the stands as a solution to the problem of hunger.

"There is malnutrition in Holot. The food is inedible, and there is a shortage of it," said Ascherman before beginning the Haggadah song "This Is the Bread of Our Affliction." Activists claim that keeping food from prisoners is a form of coercion, designed to get them to sign papers saying they agree to leave Israel "of their own volition." Then they can be returned to their native countries, where they often find themselves in life-threatening situations.

"We are Christians," said Haddish Qahas, from Eritrea. "We know the story of the Exodus, the story of Moses. You were refugees once, just like us. You know what we experienced more than any other nation on Earth. You know what is happening in Eritrea, and yet you still put us under unbearable pressure. I don’t understand you. I haven't seen my mother in nine years. No one here wants Israeli citizenship. Everyone wants to go to their own country, their own home, their own mother. I'm wasting my life in this place. Why? I haven't killed anyone. I just want to work and learn."

Tali Etzion, a Tel Aviv resident, took part in the ceremony. She said, "Why don’t we follow the adage 'The poor of your own city take precedence' [Babylonian Talmud Baba Metzia 71a]? These are the poor of my city. I am the daughter of Holocaust survivors, who were refugees. My country is involved in an injustice in my name, and I am trying to correct it."

Victor and Katie Markowitz live in the United States, but are in Israel visiting Katie's mother. They also came to the ceremony. "Even overseas, we care about what happens in Israel," Victor said. "We can’t begin to imagine what these people have been through."

Ascherman remarked that the salt water used in the Jewish ritual to symbolize the tears of enslavement represents the "many tears that were spilled in this place," the bitter herbs recall the bitterness of oppression and the traditional green vegetable on the seder plate symbolizes the spring season. "Even in the harshest winter, we know that spring will come. After all the difficulties, change will come," said Ascherman.

Mishael Lulai from Beit Shemesh ended up at the event by chance, as a driver in the convoy that brought the seder volunteers to Holot. He supported having such a ceremony.

"The Jewish people have gone through so much suffering," Lulai said. "There was the Exodus from Egypt. They suffered as slaves. We should understand the refugees. We shouldn't put them in prison. We should let them work and earn a living with dignity."

Ascherman closed the ceremony by stating, "As the Jewish and Israeli people, we cannot experience redemption as long as there is still oppression." Then, everyone roared, "Let this be the last seder in Holot!"

It seemed, however, that many believed they would meet again in the same place next year.