Young Israelis, just out of the army, routinely leave Israel for the Far East to “clear the head,” writes Ben Caspit, but gather for a massive Passover ceremony across Thailand, Nepal or India. 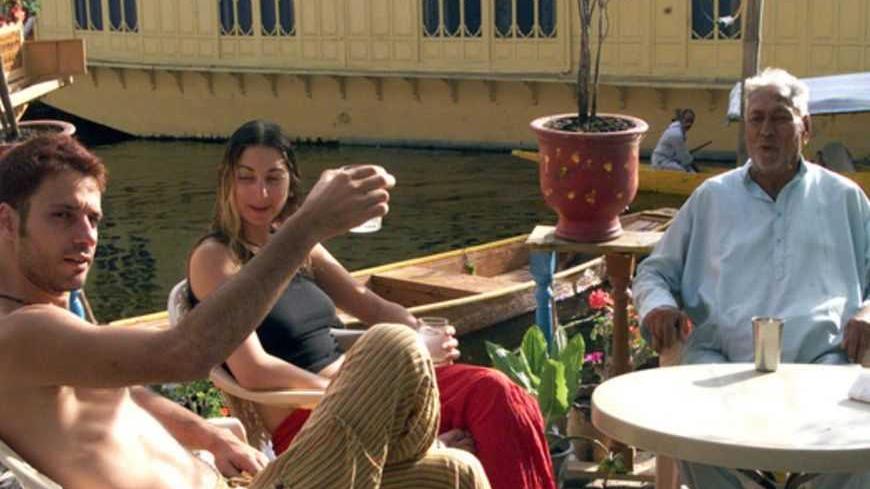 Israeli tourists sit with the owner of a Kashmir houseboat (R) in Srinagar, August 2004. - REUTERS/Danish Ismail

The thousands of tourists wandering around every evening on the famous Chaweng Boulevard on the Thai Island of Koh Samui were evidently puzzled at the goings-on in a large three-story office building located at the center of the crowded boulevard. In between the stalls of jeans and T-shirts, the restaurants, the bars, the massage dens and the thousands of street peddlers, there stands the center of the Chabad movement, the likes of which are scattered by the hundreds throughout the world. Since the early evening hours, hundreds of people of all ages, most of them clad in white shirts and wearing a curious piece of cloth on their head, were flocking into the building.

That piece of cloth is a skullcap, called a Kippa, traditionally adorning the heads of Orthodox Jews, and the event they were about to attend was the Passover Seder, the Passover being the most formative of Jewish holidays — the symbol of the Israelites deliverance from slavery to freedom and of the exodus from Egypt and return to the Promised Land. The Passover Seder was celebrated that night in Koh Samui with great pomp and ceremony amid the sweaty, noisy, colorful and enchanting Thai medley that attracts millions of tourists each year to this magnificent land of many islands. The majority of the Israelis who attended the Passover Seder in Koh Samui are not observant Jews; nevertheless, they did not want to miss the event that night, which for every Israeli represents the values of family, unity and freedom.

There is virtually no spot on the globe where a local Chabad representative cannot be found. They are always there, ready to lend a supportive hand and extend instant help on any matter at all, and, if need be, offer accommodation as well, not to mention the open-to-all ritual Passover Seder feasts and the Sabbath celebration according to the Jewish law. Thousands of emissaries of the Chabad movement are deployed around the world, standing by, ready to respond to any contingency or call for help. And they are not waiting in vain. Israel is a nation of 8 million people, but the activity it generates globally would befit a nation with a population dozens of times more numerous. Indeed, there are people in India who are willing to swear that Israel’s population numbers several hundred millions. After all, the Israelis are seen everywhere — in Delhi, Mumbai, Rishikesh, Agra, Goa and countless other sites, whether out-of-the-way or nearby, well-known or godforsaken.

I once participated in a challenge jeep tour of the Indian Himalayas. While traveling around Ladakh, a remote, isolated, rugged and uninhabited region on the outskirts of the Himalayas, we noticed all of a sudden, after long days of roaming the rough country without seeing a soul, a cloud of dust approaching us from the east. In a few minutes, three motorcyclists became visible through the dust. They stopped in front of our caravan of decorated jeeps and it turned out that they were Israelis, on their way back from Kashmir, the area of dispute between India and Pakistan torn by bitter battles. What were you looking for out there? We wondered. Isn’t it a highly dangerous place? As if it isn't dangerous enough in Israel, they snapped in response, adding, "Anyway, we are from Jerusalem." They had apparently gone all the way to Kashmir to flee Israeli reality.

Above the main entrance to the Chabad House in Koh Samui, a “Welcome” sign in Hebrew was hanging last Monday [March 25], announcing underneath, the “Passover Seder in Thailand.” The building houses the local spiritual center of the Chabad movement on the popular island. No less than 850 celebrants attended the Passover Seder in Koh Samui this year, most of them Israeli tourists who gathered from all over the island in the festively lit Chabad House. They ate matzos [the unleavened bread traditionally eaten during that holiday], and enjoyed the luxuriant servings of specially made matza shmura, meat slaughtered in accordance with the strict Jewish law, and kosher wine, and a cheerful, boisterous and generous Passover Seder feast, properly conducted in line with the Jewish tradition, which lasted into the small hours of the night.

It was one of quite a number of Passover Seder feasts held in Thailand that night. The Chabad movement is also active in other Thai islands, as well as in Bangkok and the north of the country.

The movement operates kosher slaughterhouses, provides authorized butchers, runs bakeries and supplies any interested party with kosher food and accessories for Passover — matzos, the Passover haggadah [the guide to the Seder, recounting the exodus story], skullcaps and kosher ritual Kiddush wine. No mission is too big for the Chabad emissaries to accomplish. They estimate that on the whole, many thousands of Israelis across the country took part in the Passover Seder feasts organized by the movement. However, Thailand is just one spot on the map of Chabad Houses. The Far East is strewn with Chabad centers, designed to serve the multitudes of Israeli tourists flowing there.

India is teeming with tens of thousands of Israelis, and they have come to be known — for better or worse — everywhere, even in the less widely toured countries of the Far East. All in all, there are tens of thousands of Israelis traveling throughout the Far East, on foot or by car, at any given point in time. The Israeli tourists are, for the most part, backpackers who have set out eastwards “to clear the head” following three years of service in the Israel Defense Forces (IDF). Less often, they are the worried parents of those backpackers, who go looking for their missing kids after two or three years, with the aim of bringing them back home. There are in Israel professionals who have specialized in locating young Israelis who got lost in the Far East, and who are generally found in some far-off guest house, hazy under the influence of hallucinatory mushrooms, drugs, or a combination of both. Some of them are returned to Israel in an unconscious condition, with the use of special means. Medical intervention and lengthy hospitalization in rehabilitation institutions are subsequently required to put these young people back on track.

For the past two decades at least, released Israeli soldiers just out of regular army service have been following the same bizarre ritual: They buy a backpack, tourist guides and outdoor equipment and take off — no matter where and no matter for how long. They are setting out on an indefinite voyage to “clear the head.” They simply need it. Israel is a tight, pressing, familial and at times even oppressive place.

For some of them, the military service has been an ongoing traumatic event involving painful experiences that cannot be lightly shaken off. They go wherever the wind carries them — by and large, they set off eastward, while many others turn westward, to South America. Still others opt for Australia. The principle guiding them is getting out and away, as far away as possible, to the most unfamiliar, far-flung sites, to some isolated and inaccessible location, where they cannot be reached, where they may put us Israelis out of their minds and where we may stop thinking constantly about them.

In most cases, that urge passes after a year or two or even, on occasion, after three years. Wherever they go, they are bound to run into their fellow countrymen. There will always be some Israeli restaurant out there, an Israeli guest house, a falafel stand and signs in Hebrew. The local inhabitants are quick to identify the Israelis and to catch on to their lingo and in no time, they start chatting in Hebrew with the Israeli visitors. However, at the same time, the natives are quick to realize that they should watch out and be wary of the rough, tightfisted Israeli backpacker, who is always on guard not to be “the sucker” and who is invariably looking for the cheapest gig. The backpackers are not always advocating a positive image of Israel, but that's not why they embarked on their journey. They set out to do good to themselves. Usually, they manage to achieve their goal.

A drama series entitled “Katmandu” has been aired not long ago on Israeli TV’s Channel 2 in prime time. It takes place in an Israeli guest house in Katmandu, the capital city of Nepal, just across the local Chabad House. The exodus eastward has become an inseparable part of Israeli culture. It affects Israel itself, its music, its cuisine, the burgeoning yoga way of life, and even the annual Boombamela festival (the Israeli version of the Kumbh Mela, the Indian religious festival attended by millions of Hindu followers), where young Israelis who have already been to the Far East, who are on their way, or dream of getting there are flocking.

India, Thailand, Vietnam, Nepal — these are the countries of refuge for young Israelis far and wide, the ultimate personal healer of Israelis just out of the army after three years of regular service, who seek to find themselves and their way in life. I find it hard to recall what young Israelis were doing before discovering the Far East. Looking back, I have no similar memories. As far as I can remember, we did nothing of the sort and yet, surprisingly enough, we somehow survived.