Seder can be inconvenient for gentile guests

Jewish law does not prohibit hosting non-Jews for the traditional Passover dinner, but does render such invitations very inconvenient. 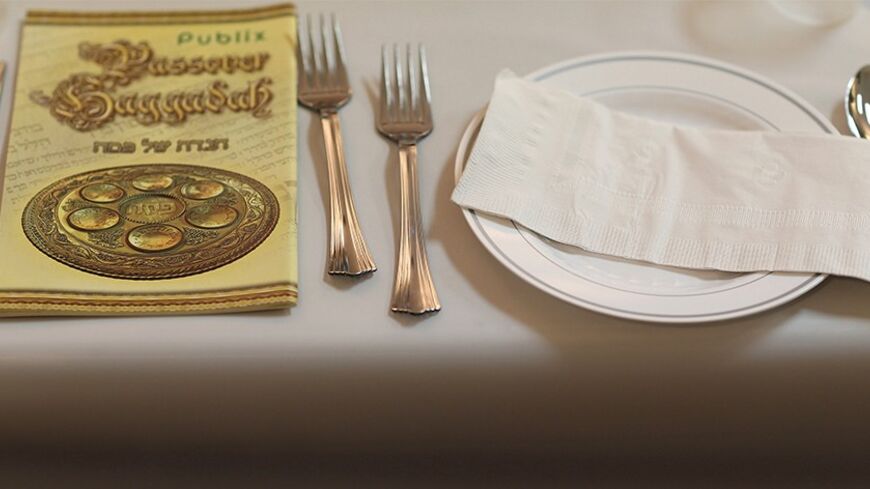 A table is set for a community Passover seder, March 25, 2013. - Joe Raedle/Getty Images

“I was invited for a seder meal [traditional Jewish Passover dinner] at the home of a close friend. For the first time, I also accepted the invitation,” he wrote. “But two days later, it turned out that because one of the other invitees, a relative of my friend, works for the General Security Service, he might not be allowed in the same room with me (!), and at this point my candidacy as a dinner guest was being re-examined. In other words, I am being vetted by the Shin Bet.”

The post drew several horrified reactions and quite a few humorous ones. “Watch out, they may accuse you of stealing the afikoman,” one commented. (During the traditional Passover dinner, a half-piece of matzo is hidden by the household for the children to find for a reward at the end of the meal.) Others invited him to their homes. They included Michael Gluzman, head of the Literature Department at Tel Aviv University, who wrote, “Ayman, you are always invited to our place. We don’t have any friends in the Shin Bet.”

In response to a query from Al-Monitor on this issue, the prime minister’s office, reacting on behalf of the General Security Service, said, “We are not familiar at all with the case you describe. In general, the claim that our guidelines ban Shin Bet employees from social interaction with a member of a minority group is utterly baseless.”

More than anything, the official reaction of the Shin Bet points to a prevailing Israeli social norm: Even without specific instructions, the average Israeli’s first instinct is to suspect Arabs and avoid befriending them. The basic Israeli assumption is that one cannot tell where the Arabs’ loyalties lie. And in social situations, certainly those that involve alcohol (such as the seder meal, at which participants are instructed to drink four glasses of wine [or grape juice]), any keeper of government secrets might reveal some of them under the influence to an Arab guest, who in turn — or so the Israelis imagine — will rush off to make criminal use of them.

There are Israelis such as Gluzman who invite Arabs, non-Jews and non-Israelis to celebrate the holidays with them. The hosts are generally Israelis affiliated with the secular political left. Generally speaking, the average Israeli citizen does not maintain social ties with Arabs, and would certainly not invite them for a ritual seder meal on Passover, one of the most family-oriented holidays in the Jewish calendar.

Jewish law does not forbid hosting non-Jews for a Passover seder.

“There’s no such law,” says Benny Lau, the rabbi of the Ramban congregation in Jerusalem, adding, “My father was for years an Israeli diplomat and we always had non-Jewish guests on seder night. My uncle, the former Chief Rabbi Israel Lau, always hosted Muslim and Christian clerics.”

Nonetheless, religious edicts make it hard for the non-Jewish guest to feel like part of the celebration. First of all, non-Jews are not allowed to participate in the eating of the Passover sacrifice, in keeping with the dictate, “A sojourner or a hired servant shall not eat of it” (Exodus 12:45). Second, Talmudic tractate on idolatry (31:2) forbids a Jew and non-Jew from sharing wine. Some commentators claim the reason for this is to discourage familiarity between the two. Either way, when hosting a non-Jew, traditionalists will modify it by boiling or pasteurization, and serve the guest his own separate wine.

Keeping in mind all of the above, the fact is that only a very few Jewish Israelis invite Arabs to celebrate the holidays. Even organizations dedicated to promoting interfaith understanding don’t tend to do so. For example, the Interfaith Encounter Association invites Jews to celebrate during the Muslim month of Ramadan, but thus far has not held similar encounters for Passover seders.

“The event is family oriented, and people will avoid conducting it outside the family circle,” claims Salah Aladdin, the deputy director of the nonprofit. He notes that his organization traditionally collects leavened products, which Jews are banned from eating during the seven days of Passover, from Jews and distributes them to nonprofits that help needy Palestinians, “with both sides knowing where the food came from and where it’s going.”

Aladdin is not averse to holding a joint encounter on Passover.

“We will consider doing so on one of the holiday days, although aspic and gefilte fish (an Ashkenazi traditional dish of poached carp) will not appeal to everyone’s taste buds,” he laughs. But he is well aware of the problems posed by Jewish religious law. The joint Ramadan meal is held in a restaurant in order to overcome Jewish dietary restrictions.

Conversely, he is not angered by the saying, “Pour your wrath unto the nations,” of the Haggadah, the text which sets the order of the seder evening. The line is one of the more offensive parts of the ritual for non-Jewish guests.

“These are ancient texts, written at a time when no one knew what politically correct was. I also go to Jewish weddings where they say, ‘If I forget thee, Oh Jerusalem, let my right hand forget her cunning. Let my tongue cleave to the roof of my mouth’ [Psalm 137:5]. I understand this text is not from today and it cannot be detached from its context.”

Before anyone takes offense, Rabbi Lau reminds us of the full Haggadah reading: “The quote is ‘Pour your wrath unto the nations who do not know thee.’ Ninety percent of the people you invite will turn out to be believers in monotheism, both Christians and Muslims. The sentence is directed only at those who seek to darken the world by hiding the light of the Lord. The minute you explain to guests the true meaning of this phrase, they will immediately join in saying it.”

So devout Jews encounter obstacles in having non-Jews over for a Passover seder. Perhaps that’s why numerous questions are posted on religious and rabbinical counseling websites in hopes of understanding how, if at all, one can host a gentile at the holiday meal.

In an important way, for Sikseck's would-be host to be deterred from celebrating with a Shin Bet employee and an Arab is very similar to the problems posed by Jewish law, which makes it hard to invite a gentile for a holiday meal. In both cases, social customs simultaneously welcome such invitations and place obstacles in their way. That’s how Sikseck sees it.

“The seder eve is a small event that symbolizes it all,” he says. “There are lots of good intentions, but many things that prevent them from being carried out. The invitation is meant to include you, but all the elements point to exclusion: the wine, the sacred Passover offering, 'Pour your wrath unto nations.' It’s off-putting.”

Nonetheless, he says laughingly, there’s an ironic aspect to the seder meal.

“I feel that my Jewish friends treat the Passover seder like a punishment, and if I were to take part in one, there would be punishing elements for me, as well. One mustn’t eat this, one mustn’t drink that and one shouldn’t touch this. Since everyone feels it’s a punishment, in a perverse way they would truly have been bringing me into the family.”