Muslims and Christians gathered inside the Jewish Council of the Emirates in Dubai upon the invitation of Rabbi Eliyahu Abadi to celebrate together the Mimouna — a Jewish feast that comes seven days after Passover. 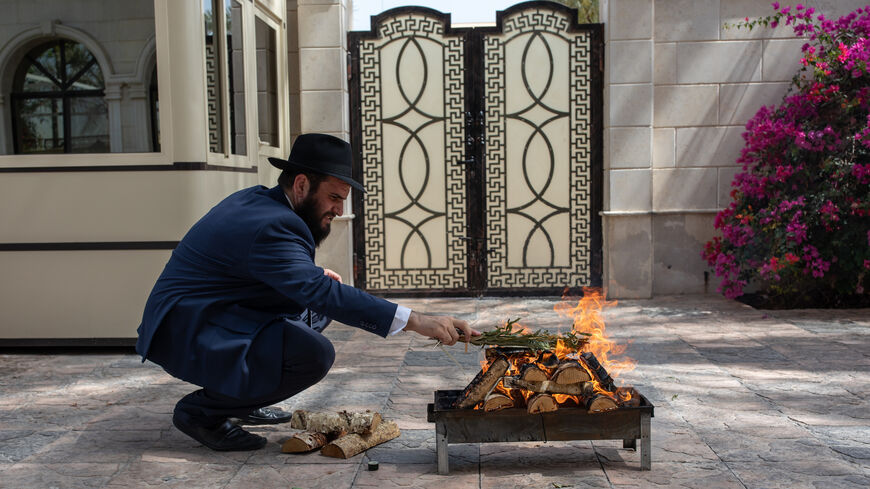 Adhering to Jewish tradition, Rabbi Levi Duchman burns willow branches from a previous holiday on the eve of Passover at the Jewish Community Center of the UAE on March 26, 2021, in Dubai, United Arab Emirates. - Andrea DiCenzo/Getty Images

Dubai, UAE - This year’s Mimouna, a Jewish festival held annually in April on the day after Passover ends, was different this year as it coincided with the last days of the Muslim holy month of Ramadan and the Christian Orthodox Easter.

In celebration of these three religious occasions, and within the framework of the values of peace, love and tolerance that the United Arab Emirates embraced as part of its tolerance initiative announced in 2019, the senior rabbi of the Jewish Council of the Emirates (JCE), Elie Abadie (an American of Lebanese origin), held a ceremony featuring a mixture of Mimouna rituals and an iftar (breaking of fast) for Muslims in the presence of Christian religious figures.

Inside Villa No. 77 in the luxurious area of ​​Jumeirah in the Emirate of Dubai, in the courtyard of its small garden, a number of public figures from several sects met at the invitation of Abadie.

Choosing the courtyard as the celebration venue was intentional since, according to Passover rituals, festivities are held in the evening and in courtyards in remembrance of the sacrifice of the Paschal lamb slaughtered at night in the courtyard of the Temple Mount in Jerusalem, according to Abadie.

Speaking to Al-Monitor, Abadie said, “This is the first time we celebrate this holiday with our brothers from other religions, even if several religious occasions coincided before on the same day. Last year, preventive measures to limit the spread of the COVID-19 pandemic in the UAE prevented us from holding collective events.”

He added, “After the Abraham Accords [were signed between the UAE and Israel] in September 2020, the Jewish community in the UAE has become more comfortable and free to practice their religious rites.”

This year, the month of Ramadan in the UAE is different from the rest of the Gulf Cooperation Council countries and even the countries of the Middle East. The Department of Islamic Affairs and Charitable Activities in Dubai organized on April 10 an iftar banquet attended by representatives of all the monotheistic and other religions.

After a two-year halt due to the pandemic, Guru Nanak Darbar, the Indian Sikh temple in the Jebel Ali Village in the south of Dubai, has resumed its offering of daily iftars to low-income Muslims of all nationalities since Ramadan began.

The UAE is home to millions of people from all sects and religions in the world. They are allowed to practice their religious rituals in their own temples built on Emirati soil.

Explaining the Mimouna rituals, Abadie said, “This holiday falls on the seventh day after the Jewish Passover, during which it is forbidden for Jews to eat any kind of leavened and fermented grain products to commemorate the Jews’ freedom from Egyptian slavery. When the Jews escaped Egypt (led by Moses) at sundown, they didn’t have time to let their bread rise, so they ate matzah bread, which is bread from unleavened dough.”

The origins of the Mimouna holiday are traced back to the Jews of Morocco, specifically to the rabbi and scholar Moses Ben Maimon who lived in Cordoba before his migration to the Moroccan city of Fez. He was a medieval Sephardic Jewish philosopher and a prolific and influential Torah scholar of the Middle Ages who had several acclaimed writings on Jewish law and ethics.

Abadie continued, “Two days before Mimouna, feasts are prepared in the courtyard of houses in anticipation of the great joy. On Mimouna night, at sunset, we play music inspired by religious rituals and the Andalusia culture in particular and offer varieties of food and sweets.”

On the rituals of this feast, Abadie said, “The special dishes prepared for this holiday include the Moroccan moufleta (a type of crepe), the Tajine dish made of lamb and fig fruits, and varieties of sweets. During the exodus from the land of Egypt, Jews suffered bitterness and torment, and sweets represent the idea of ​​salvation.”

According to the Jewish Encyclopedia, during the seven-day period of Passover Jews eat bitter herbs such as wild lettuce and raw dandelion in remembrance of the bitter enslavement of the Jews and the tears that they shed.

An official source from the Community Development Authority, a government institution that oversees the religious sects in the UAE, told Al-Monitor on condition of anonymity, “The Jews in the UAE number around 2,000 [and are] distributed between Dubai and Abu Dhabi with several nationalities. To this day, the Jewish community in the UAE has no official synagogue since no request to build a private temple has been submitted yet. But even before the Abraham Accords, a number of Jews practiced their rituals with ease and freedom inside a villa in Dubai under the supervision of the Jewish Council of the Emirates headed by Ross Kriel.”

The source added, “In 2019, [the UAE] government announced the [beginning of] construction of the Abrahamic Family House project on Saadiyat Island in the capital Abu Dhabi, which includes three temples of the three religions. The project may be nearing completion at the end of this year.”

Abadie said he submitted a project for the construction of the first Jewish neighborhood to authorities in the country, which will most likely be in Dubai and will include a synagogue, a private school for the Jews, a residential compound and shops selling kosher food.

Abadie estimates the number of Jews in the UAE to be 500. “There may be other numbers, but I am talking about the Jews who interact with the Jewish Council of the Emirates and who come to pray and celebrate other occasions, especially since most of them reside in Dubai. The number may be higher, especially since there are Jews also in Abu Dhabi.”

He explained that “there are a number of Kosher stores in five specific hotels in Dubai. They are usually intended for a number of non-Jews as an experiment. Supermarkets in the UAE do not sell kosher products, but soon they will be available.”

The UAE has been working for years to consolidate the concept of religious tolerance. Less than a year ago in June 2021, Dubai opened the Holocaust Memorial Exhibition, the first of its kind in the Arab region. This exhibition is ongoing inside the Dubai Museum of the Future, which includes other exhibitions from several international cultures and religions.

In 1958, the UAE government allowed the Hindu sect to build their first temple not only in the UAE, but also the first in the Arab Gulf and the Middle East. In 1983, the UAE allowed Hindus and Sikhs to build another temple. At the same time, it allowed the Ismaili Muslims to build a center in the Oud Metha area in Bur Dubai.

The same is true for Christians, as the first Catholic church in the UAE was built in the same area in 1967 in honor of the Filipino and Indian Christian communities.

The Churches Complex was built in 1962 in the Jebel Ali area, south of Dubai, and includes Catholic, Orthodox and Evangelist churches.