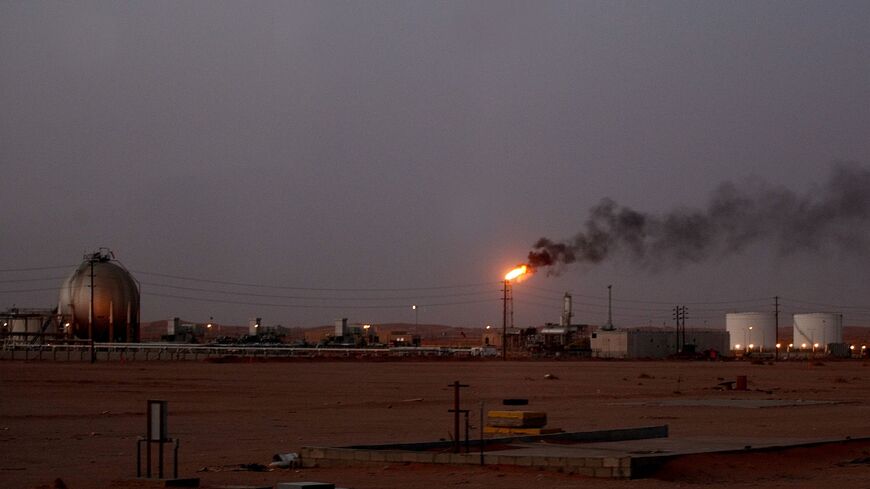 A flame from a Saudi Aramco (the national oil company) oil installation known as "Pump 3" burns brightly during sunset in the Saudi Arabian desert near the oil-rich area Al-Khurais, 160 km east of the capital Riyadh, on June 23, 2008. - MARWAN NAAMANI/AFP via Getty Images

Our take: Oil-fueled growth in Middle East to be ‘short-lived,’ says bank

Downside dominates forecast. The World Bank Global Economic Prospects report released this week projects significantly lower growth for the year — now 2.9%, significantly reduced from the January estimate of 4.1%, and about half of the 5.7% global expansion in 2021 — and a potentially prolonged period of widespread stagflation — sluggish growth and high inflation — as a result of the economic and energy disruptions caused by the Ukraine war.

Here is what the report says about the Middle East and North Africa (MENA) region:

Bottom line: The economic and energy disruptions of the Ukraine war may be at the beginning of the beginning. The World Bank already classifies Yemen, Syria, Libya, Sudan, Lebanon and Iraq, as well as the West Bank and Gaza, as economies in "fragile and conflict-affected situations" — and that was before the COVID-19 and Russia-Ukraine crises. Iran is already experiencing protests as a result of food price increases.

The government of Swedish Prime Minister Magdalena Andersson owes its narrow survival of a no-confidence vote Tuesday to an ethnic Kurdish member of parliament who offered her support on the condition that Stockholm reaffirm its backing of the Syrian Kurds whom Turkey considers terrorists. In an interview with Amberin Zaman, former Peshmerga fighter-turned-lawmaker Amineh Kakabaveh called on Sweden not to cave to Turkey’s conditions for joining NATO. Kakabaveh abstained from the no-confidence vote after receiving assurances from the ruling Social Democrats just hours before.

Reporting from the Swedish university town of Uppsala, Zaman reports that “Turkey’s claims that it has nothing against the Kurdish people and only targets ‘terrorists’ ring hollow.” The question is, “will the proudly pacifist Swedes rediscover their Viking valor in the face of Turkish bullying?”

The Israeli government has sought to publicly distance itself from a series of strange deaths of Iranian officers and scientists and is warning Israeli tourists in both Turkey and Thailand that Tehran could be targeting them in retaliation. Israel added Thailand to its travel warning on Monday based on information from Thai police and the interrogation of an alleged Iranian spy in Indonesia. “The long-running clandestine Iran-Israel war, reported by Al-Monitor in recent years, has been emerging from the shadows,” writes Ben Caspit.

As the Iran-Israel war heats up, there are signs of de-escalation between Israel and Saudi Arabia. As Caspit reports, the Biden administration is working to bolster creeping normalization of Israeli-Saudi relations ahead of President Joe Biden’s expected trip to both countries this summer.

Gulf remittances are helping fuel economic development across Sudan, reports Sebastian Castelier. Remittances sent from the United Arab Emirates have provided a lifeline to  Tannoob, where Sudanese villagers are using the money to finish paving a road connecting them to the outside world. “Omar al-Bashir, who ruled Sudan with an iron fist for 30 years until 2019, cut off public funding for the village, and ‘migrating to the Gulf was the only way,'” a local leader told Castelier.

As inflation in Africa’s third-largest country skyrocketed to 359% last year, jobs in the Gulf became even more attractive, even as human rights organizations criticized the region’s racial pay gap and migrant worker conditions.

The free trade agreement signed between the United Arab Emirates and Israel in late May is expected to considerably increase the already impressive trade between the two countries. The UAE is the Arab world’s second-largest economy, and the deal will give Israeli companies a competitive advantage in the Emirati market.

“For Israel, the significance is in the agreement bridging free trade to all of the Gulf states, a market that is in rapid processes of development following the Abraham Accords,” writes Danny Zaken. The growth in UAE-Israel trade, meanwhile, has prompted increased economic and business ties between Israel and Saudi Arabia. Following a change in Saudi Arabia’s entry requirements, Israeli businesspeople are closing deals in the kingdom, including in the field of desert agriculture.

A so-called half-mummy in Luxor continues to stump Egypt’s archaeologists more than eight years after its discovery. The mummy’s body is truncated at the waist, raising speculation that the man was partially eaten by a wild animal during a hunting trip. Ahmed Gomaa reports on other theories including that the mummy’s lower body was lost in battle or stolen by thieves who raided the tomb.

ICYMI: Human Rights Watch’s Turkey director, Emma Sinclair-Webb, discusses rising violence against women in Turkey, and why the government's withdrawal from the Istanbul Convention has added to the culture of impunity.