Receiving Russian Foreign Minister Sergey Lavrov in Ankara, Turkish Foreign Minister Mevlut Cavusoglu maintains that the creation of a safe maritime corridor for Ukrainian grain exports should be accompanied by the easing of sanctions against Russia. 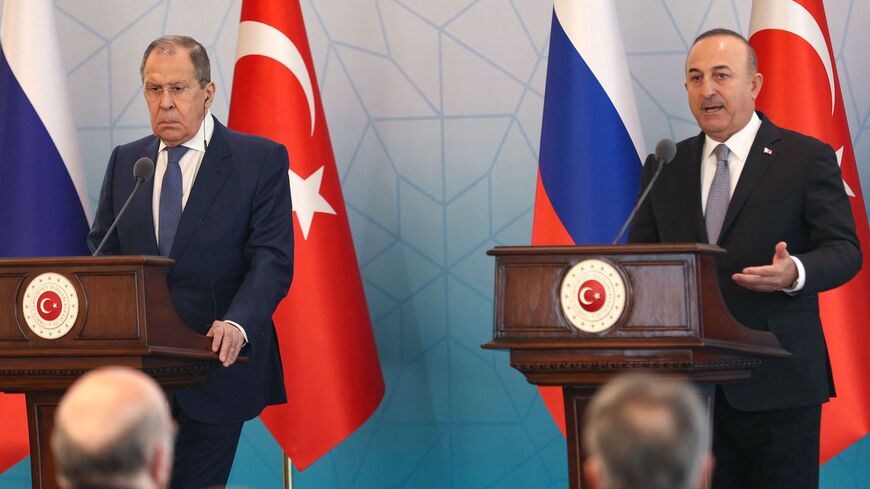 Russian Foreign Minister Sergey Lavrov reiterated his country’s “understanding” of Turkish security concerns along the Syrian border, saying that the issue of security and Syria's future will be addressed in trilateral talks between Russia, Turkey and Iran in two weeks.

“We understand Turkey’s security concerns in northern Syria,” Lavrov said alongside his Turkish counterpart, Mevlut Cavusoglu, in a press conference at the end of his visit to Ankara, accusing the United States of “feeding” illegal forces in Syria, alluding to the People’s Protection Units (YPG), which Turkey considers to be an extension of the outlawed Kurdistan Workers Party (PKK).

Lavrov also underlined the need to keep alive the Astana talks, which were initiated in 2017 by Turkey, Iran and Russia to bring the warring sides in Syria together to find a political solution to the decadelong war. The next round of talks will be held on June 17 in Nur-Sultan, the capital of Kazakhstan, he said.

Though Ukraine and Syria topped the agenda of the visit, the two ministers said that they have done a horizon tour that ranged from their different positions on Libya, Afghanistan, Turkey-Armenian rapprochement and the Middle East.

The Russian foreign minister’s visit comes amid repetitive statements by Turkish officials — from President Recep Tayyip Erdogan down — that it plans to launch a new cross-border offensive in northern Syria. Erdogan has said that the main targets of the new operation would be Tel Rifaat and Manbij, two towns under the control of the YPG. Though Erdogan repetitively says that Turkey does not need “anyone’s permission” for the operation, many analysts think Ankara needs Moscow's approval to continue its presence in northern Syria, despite the two supporting opposite sides in Syria's civil war.

“Despite the discrepancies between their countries on views of Syria and Ukraine, Cavusoglu and Lavrov maintained an effort to continue the dialogue,” Alper Coskun, a senior fellow at Carnegie Endowment and a former Turkish ambassador, told Al-Monitor. “The reference to Astana talks also points out Moscow’s intention to maintain dialogue on the Syrian issue and also to involve Iran.”

While some Turkish pundits interpret Lavrov’s words on “understanding Turkey’s security concerns” as Moscow’s “tacit approval” of a limited Turkish operation, others maintain that Lavrov did not — at least publicly — go beyond Moscow’s known position on Syria. The reference to Astana talks in two weeks was also interpreted as a “wait” signal to Turkey.

According to professor Huseyin Bagci, director of the Ankara-based Foreign Policy Institute, Lavrov’s words indicate a green light for a limited operation. “But he also wants to involve the Iranians, as his reference to a new round of Astana talks indicates. He also seems to be pushing Turkey to talk to Damascus to discuss security issues,” Bagci told Al-Monitor.

Turkey’s state-run Anadolu news agency reported that Iranian-backed forces attempted to deploy Grad missiles to the area May 30 but were stopped by Russian forces that are stationed 3 kilometers (about 2 miles) west of Tel Rifaat.

Lavrov came to Ankara accompanied by a large military delegation. A day before the Lavrov-Cavusoglu talks, Turkish and Russian defense ministers held a phone conversation during which Hulusi Akar of Turkey told his Russian counterpart, Sergei Shoigu, that the “necessary response” will be given to actions aimed at disrupting the stability achieved in the region.”

Turkey’s Cavusoglu stressed the “escalating security threat” from northern Syria, saying it must act because Washington and Moscow failed to fulfill promises to push the YPG 30 kilometers (18 miles) from the border under a 2019 agreement.

The second pillar of the talks was Ukraine and the possibility of a maritime corridor to get Ukraine grain to global markets. While both Lavrov and Cavusoglu expressed support for the creation of a corridor, Lavrov said that the ball was in Ukraine’s court.

He promised that Russia would not “abuse” its naval advantage if Ukraine’s ports were demined and would “take all necessary steps to ensure that the ships can leave there freely.”

But the Russian minister denied that a global food crisis was caused by the Russian-Ukranian war, saying that the share of Ukrainian grain exports in the global market made up about 1% of the total and therefore is too small an amount to be significant.

In a gesture to Lavrov, Cavusoglu maintained that a corridor should be accompanied by easing of Western sanctions against Russia.

“Various ideas have been put out for the export of Ukrainian grains to the market, and most recently is the UN plan, which includes a mechanism that can be created between the UN, Ukraine, Russia and Turkey,” Cavusoglu said, referring to the UN-led proposal to create a secure corridor in the Black Sea.

“As Turkey, we find this plan reasonable and see it as a feasible one,” Cavusoglu added, proposing to host a conference within the framework of the UN in Turkey.

He added that the Russian request for easing some of the sanctions against Moscow if it participated in the UN plan was legitimate. “If the whole world is in need of the products to be exported by Ukraine and the Russian Federation, we need to establish the adequate method and mechanisms,” he said, underlining that Turkey had tried to maintain a balance between the two countries.

Ukrainian President Volodymyr Zelenskyy and Erdogan discussed the creation of a safe sea corridor last week, the Ukrainian Foreign Ministry said Tuesday. It also called for security guarantees, such as a supply of weapons to defend against maritime threats and the participation of third-country naval forces.

Like on the Syrian issue, the two countries’ militaries also took up the technical details of the corridor.

“Our efforts are continuing concerning the technical planning on such issues as how it will be done, how the mines will be cleared, who will do it, how the corridor will be established and who will escort (ships),” Akar said.