A team of researchers has discovered fossils likely belonging to the Abelisauridae family that lived in the Western Desert of Egypt 98 million years ago. 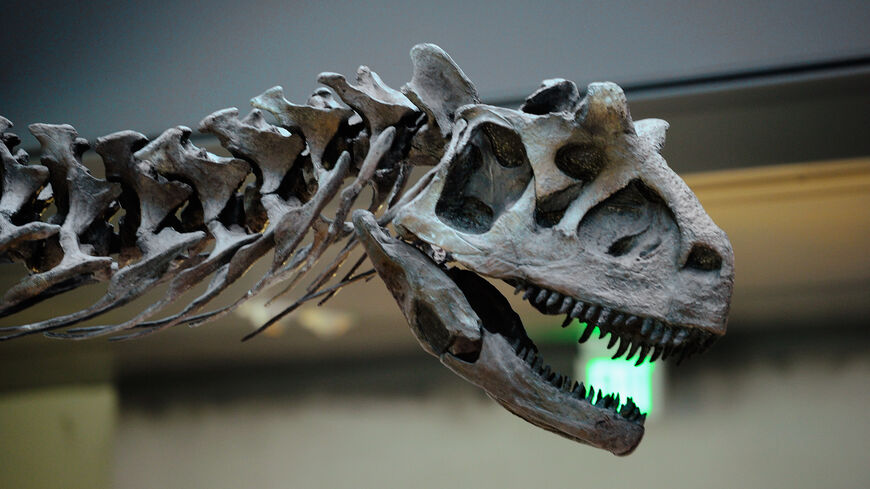 The skull and neck of a Carnotaurus specimen is seen at the Natural History Museum of Los Angeles County Feb. 1, 2011, in Los Angeles, California. - Kevork Djansezian/Getty Images

CAIRO — An Egyptian team of paleontologists has discovered fossils of a dinosaur that lived 98 million years ago in the Bahariya Oasis in the Western Desert of Egypt.

Egypt’s Mansoura University announced June 8 that a team from its Vertebrate Paleontology Center made the discovery in the Bahariya Oasis in the Western Desert of Egypt. The discovery was featured in England’s Royal Society Publishing.

A June 8 statement by the Egyptian Ministry of Higher Education and Scientific Research read, “The dinosaur is very similar to the famous T-Rex,” explaining, “In one of the joint field trips between the Mansoura University Vertebrate Paleontology Center and the scientists of the Ministry of Environment in the Bahariya Oasis, the team found a fossil of a vertebra covered with solid deposits of iron and sand. Following a detailed anatomical study that took several years, it turned out to be the 10th cervical vertebra of a large carnivorous dinosaur. It has enough anatomical characteristics to indicate that it belongs to a family of dinosaurs called Abelisauridae or Abelisaurid dinosaurs."

The statement continued, “The origin of the name Abel is in honor of Roberto Abel, the Argentinian scientist who discovered the first fossils of this species. These dinosaurs are distinguished by their terrifying shape and frightening skull, and sharp teeth coming out of their jaws similar to knife blades, while their hind feet have huge muscles to help them attack. Despite the shortness of their front limbs, these dinosaurs were among the fiercest species.”

Researchers praised the discovery and its scientific value.

Egyptian researcher Bilal Salem lead the team that made the discovery. Salem, who is also a teaching assistant at Benha University and a fellow at Ohio University, told Al-Monitor, “The Bahariya Oasis was known for being rich in fossils. It has produced skeletons from the most famous dinosaurs in the world. However, no fossils belonging to an Abelisauridae had been discovered there, so this study reveals important secrets about dinosaurs that lived in the region.”

Hisham Salam, founder of the Mansoura University’s Vertebrate Paleontology Center and a professor at the American University in Cairo, told Al-Monitor, “These discoveries explain what humans have not witnessed in history, which gives humanity an intellectual depth about the planet and a deep understanding about the climate change that led to the extinction of dinosaurs.”

He added, “Such discoveries send warning messages to humans against tampering with the planet or changing its climate and causing global warming because this could lead to the extinction of the human race, just as the dinosaurs became extinct.”

Salam called on the Egyptian authorities to establish a museum of natural history in Egypt that showcases Egyptian discoveries in paleontology, a field that is flourishing with new research.

Salam stressed, “This discovery is proof that the world's continents were once merged together, because no similar fossils have been discovered in Africa, rather in South America.”

Sana el-Sayed is the former deputy director of the Mansoura University’s Vertebrate Paleontology Center, a doctoral student at the American University of Michigan and co-author of the Royal Society Publishing study. He was quoted in the Mansoura University June 8 statement as saying, “The discovery of this new species in the Bahariya Oasis shows that the land of Egypt still contains many treasures that contribute to changing our view of the history of vertebrate fossils in the world.”

The same statement quoted Matthew Lamanna, an American paleontologist and co-author of the same study, as saying that the Bahariya Oasis has acquired a semi-mythical status among paleontologists because it produced the world's first recorded dinosaur fossils. In 1911 and 1912, German paleontologist Ernst Stromer unearthed the huge skeletons of three carnivorous dinosaurs: the Spinosaurus, Carcharodontosaurus and Bahariasaurus, as well as the herbivorous dinosaur Aegyptosaurus. They were destroyed in the bombing of the Museum of National History in Germany during World War II.