After much political haggling, the coalition finally managed to disperse the Knesset, setting the date for the new elections as Nov. 1. 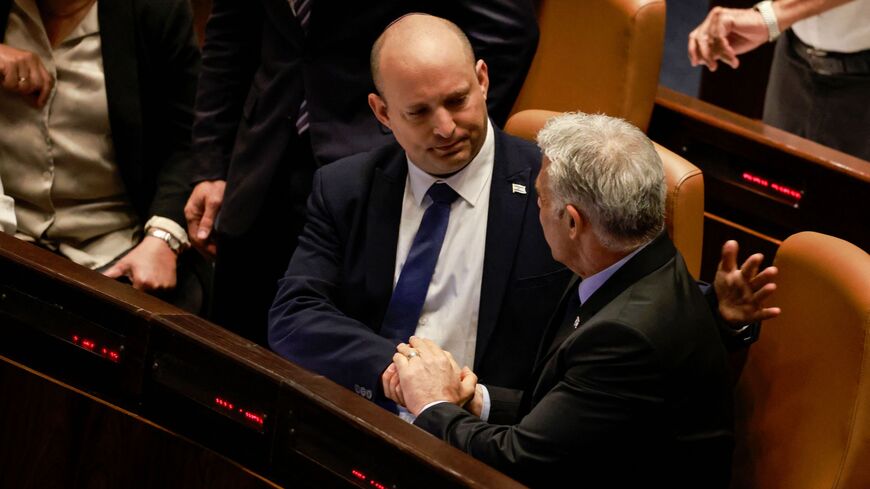 Israeli Minister of Foreign Affairs Yair Lapid (R) and outgoing Prime Minister Naftali Bennett speak to each other at the Knesset following its dissolution in Jerusalem on June 30, 2022. - MENAHEM KAHANA/AFP via Getty Images

Foreign Minister Yair Lapid probably didn't imagine the tumultuous way that he became prime minister. He was supposed to take over from Naftali Bennett at midnight last night, but with the Knesset so divided, neither bloc was even able to reach an accord on how the legislature would dissolve itself. Lapid was forced to wait well into the night, while Likud leader Benjamin Netanyahu tried to form an alternative government right under his nose.

It took until late this morning for the 24th Knesset to vote to dissolve itself. It also decided that the next election would take place on Nov. 1, 2022.

Lapid will officially become prime minister at midnight tonight, but he and Bennett did not wait for then to officialize the transition. A small ceremony took place early this afternoon at the prime minister’s office. Another will take place tonight at the residence of President Isaac Herzog. Lapid need not be sworn in at the Knesset, as he was when the government was first established, as agreed in the rotation deal.

November will be the third time Israelis head to the polls in just three and a half years, and they still have no assurance that this vote will restore political stability.

The dissolving coalition was able to defeat the opposition in the final, symbolic act of picking the date of the next election. The opposition preferred Oct. 25, just a week after the fall holiday season, which would have made it easier for the ultra-Orthodox to mobilize yeshiva students to the polling booth.

Lapid can now spend the weekend at the prime minister’s residence in Jerusalem and begin to prepare for the visit of US President Joe Biden next month. He can also get to work on his election campaign.

It is a seminal moment for Lapid, the high point of a decade-long career. He proved that patience and determination pay off, managing to become leader of the country through intricate political maneuvers, even though Israel’s center-left bloc is smaller than the right-ultra-Orthodox camp. His alliance with outgoing Prime Minister Naftali Bennett, dating back to their earliest days in politics in 2013, climaxed last year, when it brought both of them into the prime minister’s office.

Opposition leader Benjamin Netanyahu, Israel’s political phoenix, can also look back with satisfaction. He just survived one of the toughest years since entering politics over three decades ago.

As the final speaker before the Knesset voted to dissolve itself, Netanyahu fired off the opening salvo of the 2022 election season.

Much like other Knesset members, he barely slept last night, but he nevertheless stepped confidently to the podium to mock the outgoing government, saying, “They promised change, they spoke of healing, they experimented, and their experiment failed. That’s what you get, when you combine the fake right with the radical left. Will we see Lapid put together another failed government, which relies on the Muslim Brotherhood and the Joint List, which relies on supporters of terror, or will we see a broad nationalist government led by us, which will restore pride, strength and hope to Israel?”

Netanyahu stood before the Knesset as a clear winner. Under his leadership, the opposition remained united for the entire year and hammered the fragile coalition. Day after day, month after month, Netanyahu was like a commander in the field. His troops saw a fighter who refused to give up. He was more like a fresh young lawmaker than a former prime minister who had served longer than any of his predecessors.

Netanyahu had predicted that the coalition would last a year, and he was right. He never let up, lest his rivals in the Likud pounce on him or the ultra-Orthodox join the coalition. He ensured that no one broke ranks. He hardly ever took a holiday and he cut down on his trips overseas. Instead, he spent a lot of time roaming the country and meeting with everyday people.

The coalition was unable to get any members of the opposition to join its ranks and increase its majority. Instead, the opposite happened. Two Knesset members from Prime Minister Bennett’s own Yamina party, Idit Silman and Amichai Chikli, quit the coalition.

The coalition was also unable to keep Ghaida Rinawie Zoabi of Meretz. She stopped voting with the coalition several weeks ago, saying that it does not reflect the will of the Muslim Arab community that she represents. It was a mortal blow to the coalition, which had already lost control of the Knesset for the past few months.

The political system shifted in the final hours before the Knesset finally dissolved itself. Yesterday evening, Bennett announced that he has decided to step back from politics and handed over leadership of his party to Interior Minister Ayelet Shaked.

Bennett delivered a moving speech about his successor, vowing, “I’ll continue to help him as much as I can. His success is the success of the state.” Bennett pledged that the transfer of power will be professional and well organized. “I have the good of the country — and only the good of the country — in sight. That’s the way it was, and that’s the way it will be. I do not plan to run in the next election, but I will remain a loyal foot soldier of this country, the State of Israel, which is the great love of my life. Serving this country is my destiny.”

While all the parties in the coalition heaped praise on Bennett, his former colleagues on the right were happy to see him go. Bennett is leaving political life without a camp of his own. The center-left may appreciate him, but they will not again vote for him.

In contrast, Lapid does have a political future. He has a party and a large electorate that supports him. Bennett never had either, which made it so hard for him to govern. Lapid is now facing the most important campaign of his life, going head-to-head against Netanyahu. Both have strong bases and both are considered gifted campaigners.

In many ways, it will be a struggle over the identity of the state of Israeli. Will the conservative religious camp set the tone for the coming years, or will a secular, liberal Israel prevail?