Turkey's strategy in blocking Sweden's and Finland’s NATO memberships could soon start to pay off. 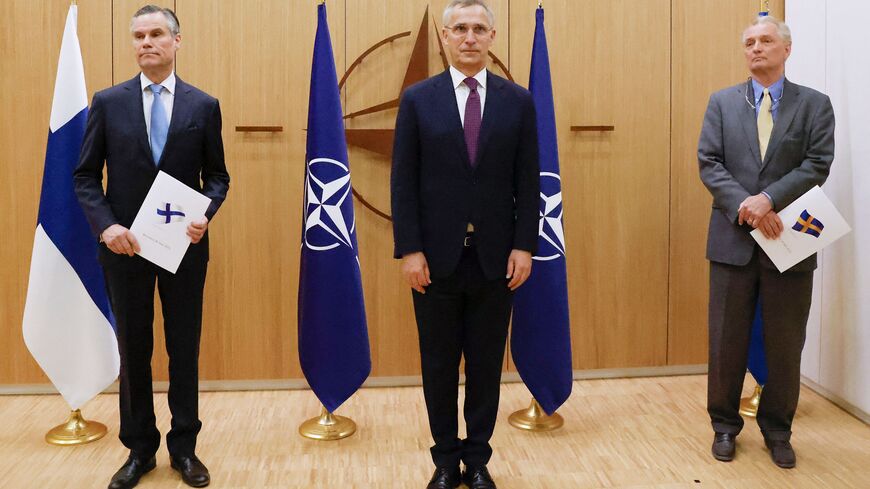 Ankara’s threats to block Sweden's and Finland’s NATO memberships may yield some modest dividends, with the security alliance weighing whether to devote its last session during a summit in Madrid next week to “challenges” to its southern flank — meaning Turkey — and the fight against terrorism, Al-Monitor has learned.

The session, which sources say will most likely be added to the program, would provide Turkey with a platform to air its longstanding gripes over what it says is a lack of NATO solidarity over the threats it faces, including from a US-backed armed Kurdish group in Syria that Ankara says is closely linked to the Kurdistan Workers Party (PKK). The PKK is waging an armed campaign for Kurdish autonomy inside Turkey and is designated as a terrorist organization by the United States and the European Union.

One of the sources said the session had been added to the program and would be called "Terrorism in All its Forms and Manifestations." Turkish Foreign Minister Mevlut Cavusoglu indicated that this was a done deal during a press conference with UK Foreign Secretary Liz Truss, saying he found it "significant" that the session would be taking place. He did not elaborate.

Turkey wants Sweden and Finland to sever all ties with the Syrian Kurdish groups and proscribe their activities within their own borders, one of several demands that it’s made in exchange for allowing both countries to join NATO. A meeting held in Brussels last week to break the deadlock yielded no concrete results.

Well-placed sources with knowledge of the ongoing negotiations led by NATO Secretary-General Jens Stoltenberg said that a second trilateral meeting between Turkey, Sweden and Finland could take place in Brussels, even as early as Friday, before the summit is held.

Haggling over the wording of a statement to be issued at the end of the proposed Brussels meeting is continuing apace, the sources said. Turkey insists that it contain references to the aforesaid Syrian Kurdish armed and political groups as “terrorists,” the sources said. Both have refused to yield on that point so far, not least because the Kurdish-led Syrian Democratic Forces are the US-led coalition’s top ally in Syria in the fight against the Islamic State.

“[Turkish President Recip Tayyip] Erdogan and his people find themselves encouraged by Stoltenberg’s appeasing stance and are asking for more without offering any commitment in exchange,” one of the sources speaking not for attribution told Al-Monitor.

The optimum scenario for Madrid as things currently stand, the source added, is that Erdogan “will give a positive signal that the accession talks can be launched and that an accession protocol can then be signed at a later date."

This marks a significant step back from what the United States and other leading alliance members had originally hoped for. This was reflected in US Secretary of State Tony Blinken’s upbeat comments in May that the differences between Turkey and the Nordic states would likely be resolved in time for the summit.

The plan was that NATO ministers would welcome Sweden and Finland as invitees to Madrid and sign accession protocols permitting both to become parties to the alliance’s 1949 founding treaty before the summit. The Nordic nations duly made their applications for membership on May 18, ending decades of neutrality and believing Ankara to be on board, only for Erdogan to do a U-turn and pile on a slew of demands that contradict their democratic principles. The accession protocols were to have been signed 10 days after the applications were handed in. “But because of what Turkey did, not only were the protocols not signed, the accession talks did not start, so we actually moved backward,” the source said.

Sweden's and Finland’s memberships in NATO are strategic priorities for the Biden administration and NATO in line with efforts to contain Russian aggression in the wake of its invasion of Ukraine. Foreign Secretary Truss was in Ankara today along with Defense Minister Ben Wallace to lobby Ankara on the issue as well as to discuss ways to ship Ukrainian grain via the Black Sea to avert a global food crisis.

Washington has thus far refused to step into to the fray, saying it’s up to Sweden and Finland to resolve their differences with Ankara. However, should Erdogan persist in his obduracy, the Biden administration will likely ditch efforts to secure congressional approval for the sale of F-16 fighter jets to Turkey. The proposed sale that has the State Department’s backing is seen as a key measure to improve ties with Ankara and Washington, which have frayed over Turkey’s acquisition of Russian S-400 missile batteries and the United States' continued support for Syrian Kurdish groups.

That said, murmurs of a “tipping point” in NATO-Turkish relations — with Turkey being “punished” — show no sign of materializing any time in the near future, at least not over Sweden and Finland. Besides, there is no mechanism within NATO to kick out its members, though some are advocating that one should be introduced.

Turkey has been systematically violating many of the alliance’s principles, notably respect for human rights, for decades, and long before Erdogan came to power. Either way, Erdogan’s actions have cemented the view in Western capitals that Turkey creates far more problems than it solves as conveyed by Al-Monitor contributor Cengiz Candar. Yet Stoltenberg continues to engage in what one Western ambassador labeled “zweckoptimismus,” which is German for “determined optimism.”

In the meantime, “Having pushed things this far, Erdogan seems unlikely to back down without the kind of concessions or pressure that, to my knowledge at least, NATO hasn’t put forward,” said Nicholas Danforth, a Washington-based analyst of Turkish affairs and author of the recently published “The Remaking of Republican Turkey: Memory and Modernity Since the Fall of the Ottoman Empire.” “Both sides appear willing to play the long game,” Danforth told Al-Monitor. “At best, a compromise might be reached to keep up appearances and to preserve the image of NATO unity with positive language about Nordic accession in return for equally rhetorical concessions to Ankara,” he added.