Turkey not backing down from threats to block Sweden, Finland from NATO

Following a call with NATO's chief, Erdogan is showing no signs of backing off in the standoff over Sweden and Finland’s bids to join the alliance. 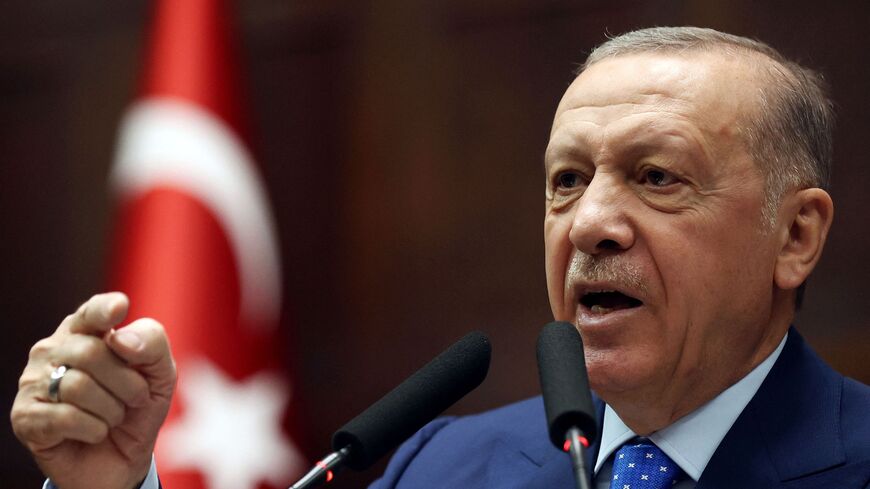 Turkey's President and leader of the Justice and Development Party Recep Tayyip Erdogan gestures as he delivers a speech during his party's group meeting at the Turkish Grand National Assembly in Ankara, on May 18, 2022. - ADEM ALTAN/AFP via Getty Images

Turkey shows no signs of backing down in the continuing standoff over Sweden's and Finland’s bids to join NATO in the wake of Russia’s invasion of Ukraine.

Turkish President Recep Tayyip Erdogan insisted in a telephone call with NATO Secretary-General Jens Stoltenberg that the Nordic countries had to take “concrete steps” toward membership in the Western security alliance.

Turkey’s Communications Directorate said in a statement that these included providing written assurances that they would combat “terrorism” and cooperate with Turkey in its defense industry. Turkey’s Foreign Minister Mevlut Cavusoglu said separately that Turkey’s expectations had not been met by various documents provided by Sweden, presumably in response to Ankara’s demands.

The Financial Times reported that Turkey had rejected an invitation by NATO to take part in trilateral talks with Sweden and Finland that were meant to be held today.

Ankara wants more substantive commitments from both governments before sitting at the table, according to unnamed senior officials in The Financial Times. Turkey has labeled the two countries “incubators” for terrorism.

Swedish and Finnish leaders have aired bemusement over Ankara’s stance. When they first floated the idea of ending decades of neutrality and joining NATO, Turkey signaled its support.

The U-turn is seen to be driven by Erdogan, who wants to milk Turkey’s veto power in the 30-member alliance for what he can, including playing to nationalist sentiments at home as a diversion from runaway inflation, which is bleeding support from his ruling Justice and Development Party (AKP). Parliamentary ahead of presidential elections are to be held by June 2023 at the latest. The economic downturn has ushered hope of an opposition victory for the first time since the AKP shot to power in 2003.

Turkey has a long list of conditions, which includes extraditing individuals who hold Turkish citizenship and are accused of terror charges. They are said to include the prominent Turkish human rights campaigner and publisher Ragip Zarakolu, 73, who holds Swedish citizenship and cannot be extradited, and whose most egregious offense appears to be a lifetime of defending the downtrodden.

It also wants them to scrap arms embargoes imposed in the wake of Turkey’s 2019 assault against US-backed Kurdish forces in northeast Syria. Finland and Sweden have yielded on that front.

Sweden says a beefed-up terrorism law that will come into effect on July should address some of Turkey’s concerns. But today’s statement from Ankara suggests that it remains unswayed.

None of this stopped Stoltenberg from hailing today’s conversation with Erdogan as “positive.”

Stoltenberg said on Twitter that he held “a constructive conversation” with the Turkish president ahead of the NATO summit in Madrid set forJune 29-30. He repeated his support for “addressing Turkey’s legitimate security concerns.” However, there is growing acceptance within the alliance that the crisis will not be solved in time for the Madrid summit.

Hopes that Washington would step into have proved empty so far, with US officials telling their Nordic counterparts to try to sort out their differences with Turkey on their own.