When Israeli Foreign Minister Yair Lapid scheduled his trip to Turkey, he didn’t know he would be arriving almost as a prime minister. 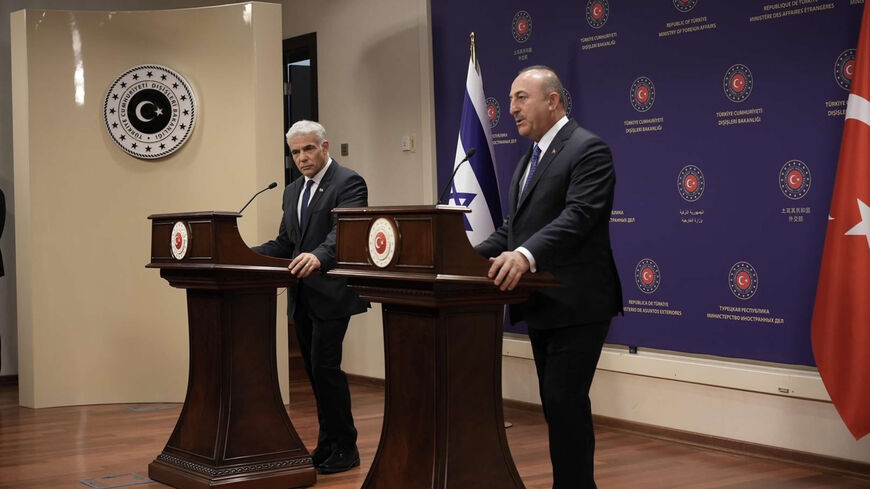 Israel’s Foreign Minister Yair Lapid and his Turkish counterpart Mevlut Cavusoglu concluded a short while ago their joint press conference, ending the one-day visit of Lapid to Ankara. It was the first time in many years that an Israeli foreign minister made an official visit to the Turkish capital — a visit that highlighted the continuing rapprochement process between Ankara and Jerusalem. In March, Israeli President Isaac Herzog visited Turkey, and Cavusoglu visited Israel at the end of May.

In his opening remarks, Lapid addressed publications earlier in the day that Turkish security services thwarted June 17 attempts by Iranian agents to kidnap a former Israeli ambassador and his wife, on a tourism visit to Istanbul. Reportedly, the Iranian cell targeted also other vacationing Israelis. The Mossad whisked the targeted Israelis out of the country and flew them back to Israel. Reports further said some 10 people were arrested last week in relation to the plot. The cell apparently split into four groups of two hit persons each. They were arrested in their hotel rooms while planning attacks. Turkish police also seized arms.

“In recent weeks, the lives of Israeli citizens have been saved thanks to security and diplomatic cooperation between Israel and Turkey. Just today it was published that Turkish intelligence recently foiled an Iranian plot in Istanbul. And these efforts are ongoing. We are full of appreciation for the Turkish government for this professional and coordinated activity,” said Lapid.

He then emphasized that intelligence showed without any doubts that Iran was behind the plot, stating, “We are confident that Turkey knows how to respond to the Iranians on this matter. For its part, Israel won’t sit idly by when there are attempts to harm its citizens in Israel and around the world. Our immediate goal is to bring about calm that will enable us to change the travel warning to Turkey.”

Lapid noted that both countries will continue and increase their efforts to ensure safe arrival of Israeli tourists in Turkey, especially now with the beginning of the summer.

Addressing directly Cavusoglu, Lapid said, “It is very important that in the coming weeks, we finish the process we began during your visit to Jerusalem — to allow Israeli airlines to fly directly to both Istanbul and the Turkish coast. In the last year, there was great progress in the relations between Israel and Turkey. We began to hold discussions on returning ambassadors in the near future, and on improving our economic and political dialogue. I hope we will complete these steps soon.”

Lapid's visit to Ankara was not evident, in view of the political turmoil he and his coalition are currently facing. On June 20, Prime Minister Naftali Bennett and Lapid jointly announced their decision to dissolve the Israeli parliament. Since then, they have been busy advancing the move, with the hope of concluding it mid-next week. As mentioned, despite the political effervescent, Lapid decided not to cancel his Ankara trip, focused on security cooperation.

In a phone conversation June 21 with US Secretary of State Antony Blinken, preparing the visit next month of President Joe Biden, Lapid also updated his American colleague on his upcoming trip to Turkey and its security aspect. According to the Foreign Ministry, Lapid spoke about “the joint activity with the Turkish government against terrorism.”

Israeli authorities continue warning nationals against visiting the country because the imminent threat of an attack by Iranian agents or Iranian proxies. On June 19, Bennett warned, “We are currently witnessing Iranian attempts to attack Israelis in various overseas locations. Our new rule: Whoever sends, pays. We will continue to strike those who send the terrorists, and those who send those who send them.”

Defense Minister Benny Gantz said June 18, “I call on all Israelis in Turkey to obey the instructions of the security forces. Israel is working to thwart Iranian attempts to carry out an attack, and is preparing to respond forcefully to any attack on Israeli citizens — anywhere.”