Israel still on alert over Iranian threats to tourists in Turkey 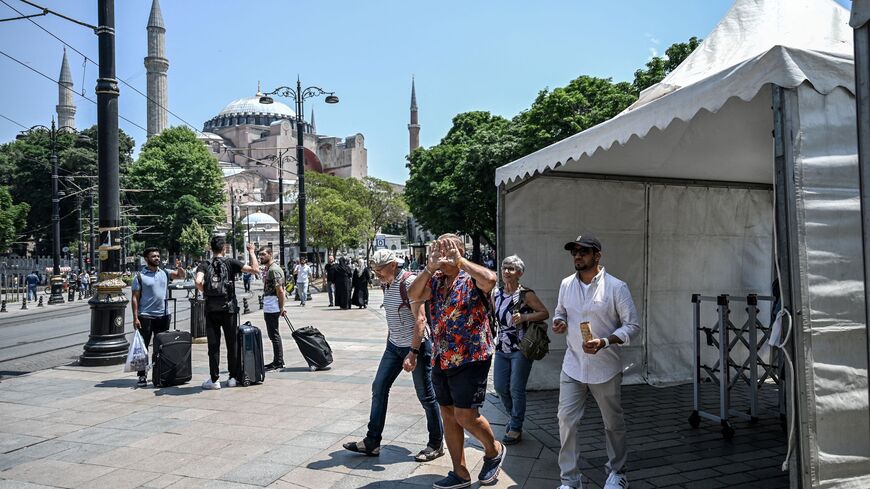 Tourists pass through a police checkpoint in Istanbul as Blue Mosque and Hagia Sophia Mosque are surrounded by a police fence for security reasons, on June 14, 2022. Israel's Foreign Minister Yair Lapid on June 13, 2022 urged citizens in Turkey to leave "as soon as possible" over threats that Iranian operatives are actively planning attacks on Israelis in Istanbul. - OZAN KOSE/AFP via Getty Images

Israel’s security agencies cannot remember when they last faced such an imminent and unusual threat of terrorist attacks against Israelis abroad. Unusually, detailed intelligence information about several Iranian-sponsored terrorist cells roaming Istanbul in search of Israeli citizens prompted the National Security Council’s Counter-Terrorism Bureau to issue repeated warnings in recent days to Israelis in Turkey in general, and Istanbul in particular, to get out of the country immediately.

Israel has not made public all the intelligence it has received, but its public warnings refer to several Iranian-sponsored terror cells cooperating with Turkish citizens and mercenaries. Israeli officials note that while Iran is clearly sponsoring these cells, its members are apparently not Iranian citizens, allowing it a measure of deniability.

Israeli officials say these teams have been given direct orders to attack Israelis no matter what, to hunt them through social media or use scouts to scour the streets and bazaars for easily identifiable Israelis in order to kidnap or kill them.

Israel occasionally issues travel warnings regarding specific destinations based on concrete intelligence. This time, the warnings have included strict instructions to Israelis in Turkey to avoid any external logos, bags or dress that could hint at their nationality, to keep a low profile and avoid sites that Israeli tourists are known to favor.

Israelis were also urged to be especially suspicious of any seemingly attractive offers they receive for tours or tour guides or business opportunities, especially through social media.

Other instructions include taking care in choosing taxis or rides and avoiding public mention of their plans. In a particularly troubling warning, Israelis were also told to be vigilant when moving about their hotels, to lock their doors and avoid opening them to unidentified people.

International media outlets have been echoing these Israeli warnings, while Israelis in Turkey report receiving calls from worried friends and relatives that have caused them to cut short their visit and return home. Tour operators have reported mass cancellations just as the summer tourist season was getting underway, and various assessments put the number of Israelis still in Istanbul at about 2,000 compared with 5,000 just days ago.

Israeli officials, including Foreign Minister Yair Lapid, have repeatedly urged Israelis to come home or cancel travel to Turkey, saying that anyone ignoring these warnings is at risk.

Anyone familiar with the troubled relationship between Israel and Turkey for over a decade might be surprised by the close cooperation in a bid to thwart terrorist attacks. Relations between the two countries have warmed over the past year, but Turkey has a clear interest in avoiding a terrorist attack on its soil that would hurt its tourism industry even as it faces a severe economic downturn.

Concerns about an Iranian-ordered attack were intensified in recent months, especially after the May 22 killing of a senior Iranian Revolutionary Guard officer, Sayad Khodai, by two motorcycle-riding gunmen outside his Tehran home. Iran has accused Israel of the killing and pledged revenge. Since then, additional deaths have been reported of senior Iranian scientists and engineers, as well as Revolutionary Guard officers. Although no proof has been offered of a direct Israeli link to these deaths, some have been attributed to Israel, and their growing number has upped the pressure on Tehran to retaliate.

In addition to calling on its citizens to leave Turkey at once, Israel upped its psychological warfare tactics against Tehran by publicly identifying the Revolutionary Guards’ intelligence chief, Hossein Taib, and providing his photo to media outlets. One Israeli official told Al Monitor on condition of anonymity that Taib was “intent on carrying out attacks on Israelis in Turkey in an insane, sick attempt to preserve his standing in Iran’s security establishment.” Reports in Iran have identified Taib as Khodai’s boss. The source described him as having a long record of intimidation and violence inside Iran and abroad, and said he always “goes for broke.”

The current operation in Turkey reflects this modus operandi, according to Israeli officials who believe the Iranians are deeply frustrated at the alleged Israeli operations on their soil.

Israeli security agencies can no longer focus only on protecting diplomats and businesspeople in Turkey, but must also extend their remit to the hundreds of thousands of Israelis who vacation in Turkey, less than two hours flight away, especially its southern Mediterranean resorts.

Defense Minister Benny Gantz issued an unusual threat over the weekend, clearly directed at Iran, warning that Israel “is preparing to respond forcefully to any attack on Israeli citizens — anywhere.” Prime Minister Naftali Bennett said at the start of the June 19 cabinet meeting, “We are currently witnessing Iranian attempts to attack Israelis in various overseas locations. … We will continue to strike those who send the terrorists, and those who send those who send them. Our new rule: Whoever sends, pays.”

The threat to Israelis in Istanbul is far from over. While several attacks have been disrupted or foiled in recent days, the threat remains as long as the suspected terrorists remain free or have not left the country.

According to Israeli assessments, even if the threat to Israelis is neutralized in Turkey, Iran will continue to seek revenge in other countries around the world that Israelis visit or where they work. Israel, for its part, will keep seeking these suspected cells, and mounting operations against Iranian arms shipments through Syria to its Hezbollah proxy in Lebanon.