Israeli Foreign Minister Yair Lapid is the latest regional leader to be greeted in Ankara as Turkey takes a fresh approach to its regional ties. 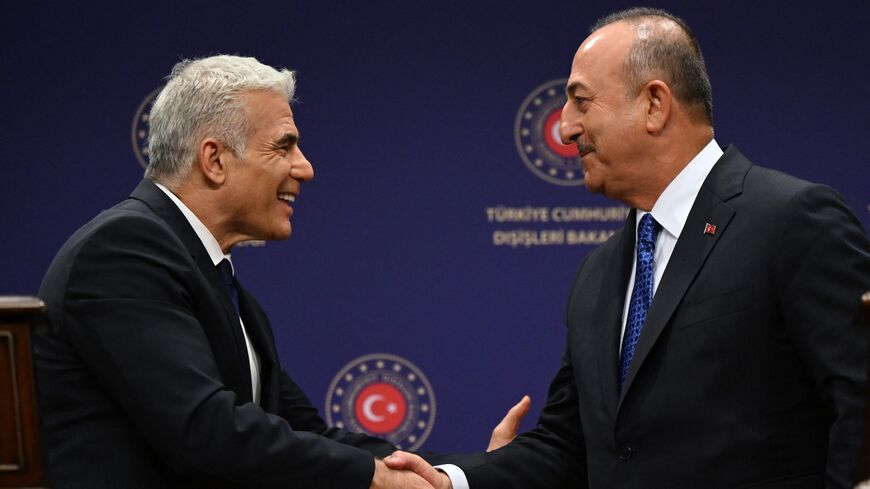 ISTANBUL — Israeli Foreign Minister Yair Lapid signaled improving ties with Turkey during a visit to Ankara on Thursday, more than a decade after relations between the regional heavyweights were ruptured.

“In the last year there was great progress in relations between Israel and Turkey,” Lapid said during a joint news conference with Turkish Foreign Minister Mevlut Cavusoglu in Ankara.

“We began to hold discussions on returning ambassadors in the near future and on improving our economic and political dialogue. I hope that we will complete these steps very soon.”

Turkey expelled the Israeli ambassador and withdrew its envoy to Tel Aviv in 2018 after dozens of Palestinians protesting the relocation of the US Embassy to Jerusalem were killed by Israeli security forces.

The crisis marked the end of efforts to rebuild ties blighted by the Mavi Marmara incident in 2010 when Israeli commandos killed 10 Turkish activists trying to deliver aid to Gaza.

Turkey regularly raises the plight of Palestinians, lobbying for talks aimed at a two-state solution to the Israel-Palestine conflict.

For Israel, Turkey’s support for Hamas, the Palestinian group that controls Gaza but is listed as a terrorist organization by Israel and most Western states, has topped its list of grievances with Ankara.

Lapid, who will become caretaker prime minister next week following the government’s decision to dissolve parliament, was visiting the Turkish capital after Cavusoglu’s trip to Israel last month, the first by a Turkish foreign minister in 15 years.

That, in turn, followed a March meeting in Ankara between Turkish President Recep Tayyip Erdogan and his Israeli counterpart, Isaac Herzog.

For the past year, Turkey has been on a diplomatic offensive to repair ties with a number of countries around the region, including Israel but also Saudi Arabia, Egypt and the United Arab Emirates.

In recent months, a host of regional leaders have flown to Ankara for talks with Erdogan or Cavusoglu, the most recent being Saudi Crown Prince Mohammed bin Salman on Wednesday.

The reset follows years in which Turkey found itself isolated. When it came to its Arab neighbors, Ankara’s support for the Muslim Brotherhood and backing for Qatar as it faced a blockade from other Gulf states increased tension.

“Turkey has come back into the region for the first time since the failed coup attempt in 2016,” Istanbul-based geopolitical analyst Suha Cubukcuoglu said.

“Until a year ago, it was isolated from the region and felt it was cornered. Now it’s trying to break that encirclement and being more pragmatic about diplomatic fence-mending over geopolitical saber-rattling.”

Ankara’s desire for warmer ties is given added impetus by its dire economic situation, with inflation running at more than 70% and the lira plummeting in value.

Erdogan urgently needs to show some improvement in the economy before elections that are scheduled for next June, and the deep pockets of wealthy Gulf states could provide a valuable source of investment.

“Decoupling from economic realities for the sake of geopolitical gains is a thing of the past,” Cubukcuoglu added. “Because of the severe economic downturn, the recession, in Turkey, it needs more capital inflows and any partner it can find to prop up the popularity of the current government, especially going forward to elections next year.”

Israeli natural gas is also an attractive lure for energy-dependent Turkey. But, although talks on building a pipeline from Israel’s gas fields to Europe via Anatolia have been much debated, the cost and political difficulties seem to rule this out for the foreseeable future.

One area where Turkish-Israeli bonds are perhaps strongest is in defense and security. Before 2010, the two countries regularly participated in joint military exercises, and their intelligence agencies have a record of cooperation dating back to the 1950s.

Israel’s Mossad is even rumored to have played a role in the 1999 capture of Abdullah Ocalan, leader of the Kurdistan Workers Party and public enemy No. 1 in Turkey.

That collaboration has been highlighted in recent weeks as Israel warned of an Iranian plot to kidnap or kill Israelis vacationing in Turkey.

Tehran has blamed Israel for a series of assassinations and attacks, including the deaths of at least four nuclear scientists over the past decade. Last month a colonel in the elite Quds Force of Iran’s Islamic Revolutionary Guard Corps was shot dead in Tehran in a killing that bore the hallmarks of Mossad.

Israel “seems to have been very pleased with the seriousness in which the Turkish side has taken Israel’s concerns regarding the safety of its citizens in Turkey,” said Gallia Lindenstrauss, a senior research fellow at Tel Aviv University’s Institute for National Security Studies.

“Still, there are challenges ahead for the Turkey-Israel relations — possible negative developments in the Israeli-Palestinian conflict are one of them, but also the fall of the government in Israel, the rising tensions between Turkey and Greece, and that the likelihood of cooperation between Jerusalem and Ankara on the export of natural gas seems low.”