Turkey's president and other officials have condemned Israel's crackdown on Palestinians in unrest at Al-Aqsa mosque, posing a serious threat to Ankara's efforts to mend ties with Israel. 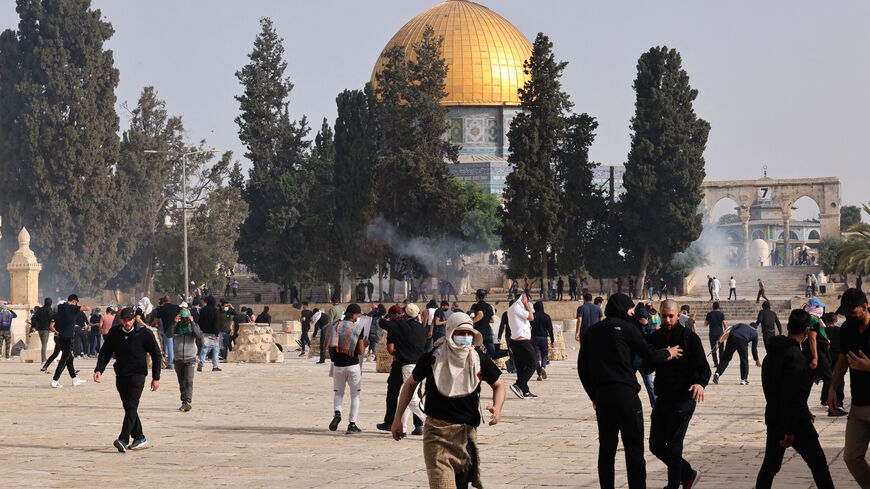 Palestinians run for cover from tear gas fired by Israeli security forces at Jerusalem's Al-Aqsa Mosque compound on May 10, 2021, ahead of a planned march to commemorate Israel's takeover of Jerusalem in the 1967 Six-Day War. - AHMAD GHARABLI/AFP via Getty Images

Turkey’s efforts to mend ties with Israel have been derailed by the ferocious crackdown by Israeli forces on Palestinians inside the Al-Aqsa Mosque in Jerusalem, with Turkish leaders relapsing into well-worn verbal salvoes against the Jewish state amid heightened religious sensitivities during Ramadan.

Turkish President Recep Tayyip Erdogan took to Twitter over the weekend to air his fury in Turkish, Arabic and Hebrew. He called Israel a “cruel terrorist state” and said Muslim nations needed to take effective steps to stop the violence. Those who remained silent were “a party to the cruelty there.”

Erdogan spoke with Palestinian President Mahmoud Abbas and Hamas leader Ismail Haniyeh to convey his support, while his foreign minister, Mevlut Cavusoglu, vowed that Turkey would continue to be the voice “of our Palestinian brothers and sisters and defend their rights.” Erdogan’s communications director, Fahrettin Altun, chimed in with tweets of his own, saying, “To the Islamic world, we say: It’s time to stop Israel’s heinous and cruel attacks! To humanity we say: It’s time to put this apartheid state in its place.”

The president of Turkey’s state-run religious affairs directorate ordered that prayers be performed in mosques throughout the country Monday “for the salvation of the Al Aqsa mosque” from the “occupying terrorist Israel state.”

The stream of condemnations came after Israeli police using rubber bullets, tear gas and stun guns clashed with Palestinian protesters and stormed the Al-Aqsa mosque, Islam’s third holiest site, on May 7. The Palestinians were protesting further planned evictions from East Jerusalem’s Sheik Jarrah neighborhood to make room for Israeli settlers, part of a sustained effort at thinning the Palestinian population in the city, rights groups say.

Clashes continued for a third day Monday as police barred Jews from entering Temple Mount to celebrate Jerusalem Day, when Israel captured East Jerusalem and the Old City from Jordan in the 1967 war. Hundreds of Palestinians and scores of Israeli security forces were injured in the violence, which continued to spread and escalate with reports of rockets being fired by Hamas from the Gaza Strip at central Israel.

Galia Lindenstrauss, a senior research fellow at the Institute for National Security Studies in Tel Aviv who specializes in Turkish foreign policy, said Turkey’s harsh reaction was hardly surprising despite Ankara’s efforts over the past months to repair its battered ties with the Jewish state, including meetings between top intelligence officials and informal cooperation with Azerbaijan in its recent war against Armenia in Nagorno-Karabakh. Lindenstrauss said, “The Turkish response to the escalation in violence in Jerusalem is very much expected and is another manifestation that Turkish-Israeli relations are highly influenced by developments in the Israeli-Palestinian conflict.” She added, “Israeli authorities are also concerned by the growing influence of Hamas in the current round of violence in Jerusalem, and hence will continue to view with suspicion Turkey’s links with Hamas and also Ankara’s growing influence among Palestinians with Israeli citizenship, who were also involved in the current round of violence.”

Israel’s top demand for any kind of thaw with Ankara is that it ends its support for Hamas and boots out Hamas operatives from Turkey. These echo Egypt’s demands that Turkey cease supporting numerous Muslim Brotherhood figures who orchestrate opposition activities against Egyptian President Abdel Fatah al-Sisi out of Istanbul if relations are to be normalized and full diplomatic relations restored. Ankara has made some tentative steps, ordering Brotherhood channels to tone down their attacks, and has reportedly deported some Hamas-linked individuals. But evidently, none of this has satisfied either Egypt or Israel so far. The first official talks held between Turkey and Egypt in Cairo last week proved inconclusive.

Israel also accuses Turkey of seeking to foment unrest in the Temple Mount, sending what it calls Turkish agent provocateurs to whip up dissent among Palestinians there, and of funneling aid to Hamas.

Turkey and Israel have not had ambassadors in their respective capitals since May 2018. That is when Turkey asked the Israeli ambassador to “take leave” over escalating attacks against Palestinians in Gaza and the Donald Trump administration’s decision to move the US Embassy to Jerusalem.

Several reasons contributed to Ankara’s course reversal. One is the belief that good ties with Israel could buy Turkey favor in Washington, another alliance gutted under nearly two decades of Erdogan’s leadership. The other is that Turkey could torpedo the deepening alliance between Israel, Greece, Cyprus, Egypt and the United Arab Emirates that is centered, as Ankara sees things, on hostility to Turkey itself, particularly in the Eastern Mediterranean.

Israel is in no rush to fall back into bed with Turkey as it basks in the satisfaction of its newly cemented ties with several Gulf states, Morocco and Sudan. Its seemingly endless electoral deadlock is another impediment. A new “change bloc” between Yesh Atid leader Yair Lapid and Yamina chair Naftali Bennett is seeking to form a coalition government after Prime Minister Benjamin Netanyahu failed to forge his. Should they succeed, Lapid is expected to become the new foreign minister. Though more of a centrist than Netanyahu, who is widely known to dislike Erdogan, Lapid too “has been quite vocal in his anti-Erdogan rhetoric,” Lindenstrauss noted.

She continued, “Hence, he will not be enthusiastic about a rapprochement with Turkey, but may be pragmatic, as all we are talking about is a bringing back the ambassadors, nothing more.”

Still, the change bloc will likely be “comprised of people with quite different world views who might speak in different voices about Turkey,” Lindenstrauss said. Whether pro-Turkey voices prevail will largely depend on Ankara’s future behavior. Either way, she added, "Most Israeli Jews view the criticism coming from Erdogan as one-sided and unjust.”