Jerusalem tries distancing itself publicly from a series of strange deaths in Iran, while warning Israeli tourists in Turkey and in Thailand that Tehran could be targeting them. 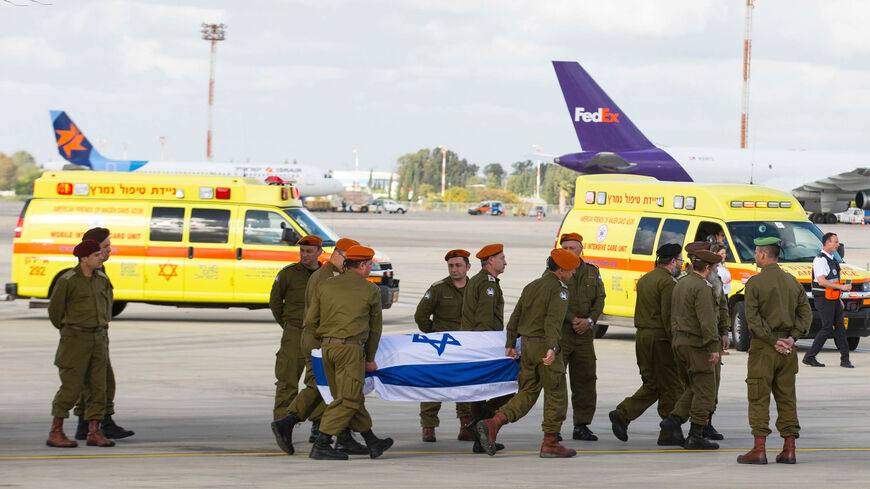 Soldiers carry the coffin of an Israeli who was killed in an Istanbul suicide bombing the previous day, upon its arrival at Ben Gurion Airport, Tel Aviv, March 20, 2016. - Jack Guez/AFP via Getty Images

Turkey and Thailand are two very popular destinations of travel-happy Israeli tourists. Both have recently reopened for tourism after the coronavirus pandemic, and Israelis are flocking to them in droves, defying a government warning against nonessential travel to these destinations due to specific information about Iranian terrorism intentions to avenge the killings of senior Iranian officers and scientists.

On May 30, Israel’s Counter Terrorism Bureau issued a warning against travel to Turkey, citing specific Iranian threats against Israelis visiting and working there. On June 6, Israel added Thailand to its travel warning, based on Thai police information and last year’s arrest in Indonesia of a man carrying a fake Bulgarian passport whose interrogation yielded information signaling Iranian attempts to attack Israelis in Thailand.

After spreading hints about alleged involvement and conducting all sorts of briefings regarding a change of policy on Iran, Israel is now trying to distance itself from the flurry of assassinations, accidents and strange deaths of senior Islamic Revolutionary Guard Corps officers and Iranian scientists on Iranian soil in recent weeks.

“Israel has not taken responsibility for any of these five deaths, and I am not at all sure that one entity is responsible for all of them,” former Military Intelligence Chief Maj. Gen. (Res.) Amos Yadlin said in a June 6 interview, noting that Iran could actually be behind one of these cases.

At the same time, two unidentified Israeli sources told The New York Times that Israel had nothing to do with last week’s death of Col. Ali Ismail Zadeh, who reportedly fell to his death from the balcony of his home. His death generated various theories and versions, with one report attributing it to suicide prompted by separation from his wife.

Either way, to cite a sports metaphor, “score charts don’t lie.” While Iran has denied Zadeh was killed, it blamed Israel for the May 22 assassination of his fellow IRGC officer Sayyad Khodai in Tehran and for previous attacks.

“Initially, they [Iran] tried to pretend they were being rained on,” a senior Western diplomatic source in the Middle East told Al-Monitor on condition of anonymity. “But they eventually understood they were being spat on. They need a quick high-profile attack to serve both as revenge and deterrent against Israel from continued activity on its soil. They cannot afford not to balance the state of play or at least create a semblance of balance vis-a-vis Israel.”

According to Western assessments, Iran cannot ignore the “critical mass” of assassinations and deaths on its soil. These include the April kidnapping in Iran of Mansour Rasouli, who reportedly told his kidnappers that he had been hired by the IRGC's Quds Force to assassinate an Israeli businessman in Turkey, an American general in Germany and a French journalist.

The kidnapping, attributed to Mossad agents, and Rasouli’s taped interrogation made available to numerous media outlets, was deeply humiliating for Iran. This was followed by the reported food poisoning death of aeronautical engineer Ayoob Entezari, the death of engineer Ehsun Ghadbeigi in an armed drone attack on Iran’s UAV facility in Parchin, in addition to Khodai’s shooting in Tehran by two motorcyclist-riding gunmen.

The long-running clandestine Iran-Israel war, reported by Al-Monitor in recent years, has been emerging from the shadows and moving into the spotlight in recent months. “This is a dangerous game and it may not benefit Israel in the short and medium range,” a former senior Israeli security official told Al-Monitor on condition of anonymity. “Israel enjoys a decisive intelligence advantage over Iran, which seems to be completely transparent in this regard. But that will not always be the case. The more Iran is challenged, the more dangerous it will become. Deadly attacks have been carried out against Israeli and Jewish targets around the world over the years,” the source said.

Officials in Jerusalem are also somewhat concerned about another front with escalation potential as a result of the latest violent developments in Iran: The conflict with Lebanon over natural gas drilling in the economic waters claimed by both countries. Earlier this week, Israel moved a gas production platform to its Karish gas reservoir in the Mediterranean, prompting angry Lebanese responses, including on the part of the Iranian-backed Hezbollah organization. “The Iranians may try to heat up this front as a kind of signal and revenge for what has happened in their territory,” a top Israeli security source told Al-Monitor on condition of anonymity June 6.

Even as the Israel-Iran war escalates, there are increasing reports of de-escalation between Israel and Saudi Arabia. US President Joe Biden was scheduled to visit Israel and probably Saudi Arabia this month, generating reports of an expected breakthrough in Israeli-Saudi relations.

Biden’s visit has since been postponed to July, pending clarification of the political crisis calling into question the Israeli government’s survival. As things stand now, the coalition’s loss in an important June 6 vote on extending the application of Israeli law to Jewish settlers in the West Bank brings closer prospects of new elections. Nonetheless, there are also “good reasons” linked to developments with Saudi Arabia for the Biden visit delay, according to diplomatic sources.

Israel and the United States have been working to achieve a significant breakthrough in the "creeping” normalization of Israeli-Saudi relations, a development Biden could have declared during his visit. Given the political uncertainty, these hoped-for developments are now in some doubt. Prime Minister Naftali Bennett is desperately trying to stabilize his rickety multiparty coalition, so far without much success. He is racking up diplomatic and security achievements, but coming up short in the political arena. At the current rate, he may not be in office to reap the fruit of his diplomatic labors.