In a press conference today, Iraqi Prime Minister Mustafa al-Kadhimi provided a report of his two years in the office, highlighting his top achievements and top challenges facing his government 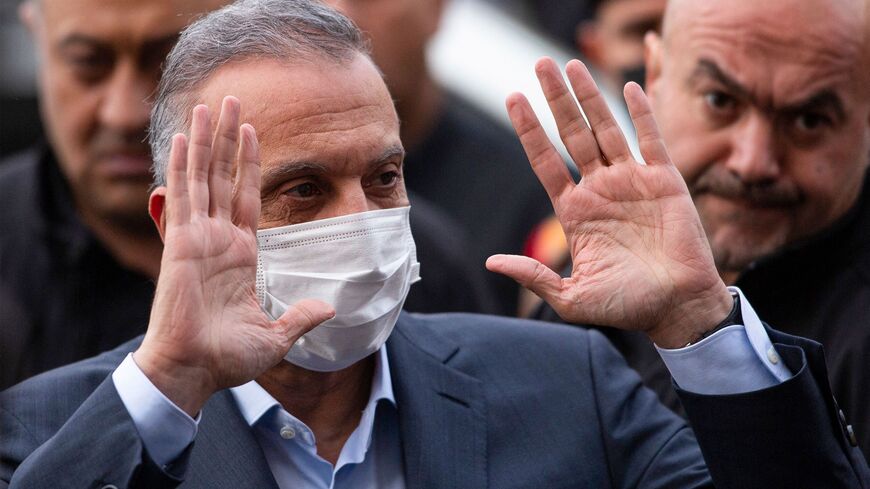 Iraq's Prime Minister Mustafa Kadhimi arrives to attend a memorial service for the victims of a motorcycle bomb that exploded the day before, in the southern city of Basra on Dec. 8, 2021. - HUSSEIN FALEH/AFP via Getty Images

During a press conference in Baghdad today, Iraqi Prime Minister Mustafa Kadhimi said that he had come into office at a very difficult and complicated time, in terms of the economy, the COVID-19 pandemic and the conflict on Iraq soil.

“Before this government, the Iraqi economy was on the verge of collapse," Kadhimi said. “We had no cash to pay salaries.”

“However, Iraq has over $75 billion in reserves in its central bank now and this is expected to increase to over $90 billion by the end of this year."

Kadhimi said Iraq was an isolated country before he came to the office, but now it is the centre of the region, hosting several regional dialogues.

“Iraq has hosted five different dialogues in these two years, of which Saudi–Iran talks are just one,” Kadhimi said, emphasizing that the “Iran-Saudi talks have made remarkable progress."

Kadhimi said the while the white paper prepared in 2020 (with 600 proposals for reform) contributed to economic reform and had been praised by international economic organizations, there is still a long road ahead for the Iraqi government in this area.

He said the government has a plan for the Iraqi economy, as stated in the white paper, and it already started implementing it, but the plan has been stopped following the elections, since the caretaker status of the government gives it only the authority to deal with everyday issues.

In regards to the political deadlock, Kadhimi accused the political parties of preventing the government from carrying out its reform plan, as the caretaker government cannot present a budget to the parliament.

“The government proposed the food security law to address the food and the electricity issues in the country."

Iraq has been facing rises food prices following the Russia–Ukraine war, alongside electricity cuts in the hot summer.

The food security law proposed by the government was nullified by the federal court last month. The parliament has worked on a different version and it has been scheduled for discussion tomorrow, but it is still not certain that it will pass — or that the federal court won't cancel it again.

Kadhimi said his government has paid all its debt to Iran for imported gas and electricity, but Iran is asking for the remaining debt from the previous governments, something this government is not able to pay without an official budget.

Kadhimi slammed the former governments for establishing gas-based generators while Iraq does not have gas for these generators to operate, claiming that this has made Iraq dependent on Iran.

He said his government worked on clean energy and made several deals for solar energy and also is working on grid connections with Saudi Arabia, Turkey and Jordan.

He added that the government is working on developing another reform plan for the environment and improving Iraqi agriculture, calling it a “Green Paper.”

Iraq is negotiating with Turkey to get its fair share of water, and the region needs more cooperation in dealing with environmental challenges, he said.

Kadhimi emphasized that his government realized a great achievement in organizing the recent elections, as the United Nations and other international organizations praised the election's integrity.