The economic reform project that Mustafa al-Kadhimi's government is supposed to propose soon faces great challenges related to the need to get parliament’s approval before taking any step. 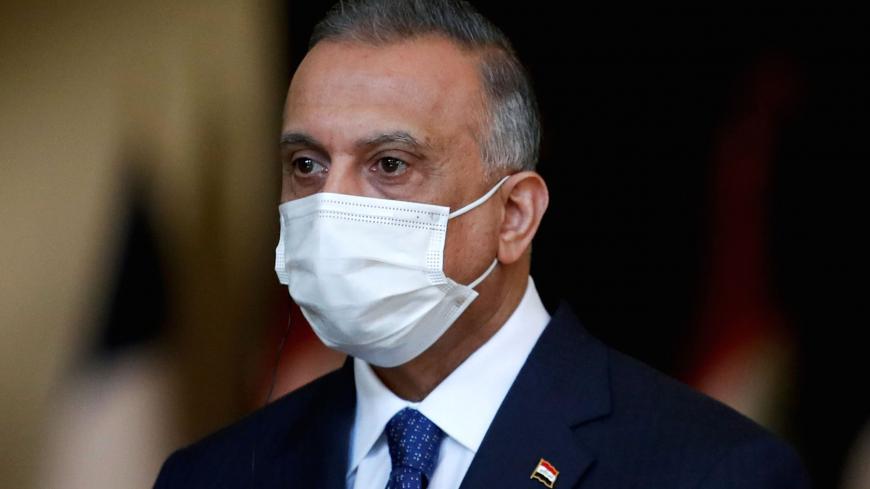 Iraq's Prime Minister Mustafa al-Kadhimi, mask-clad due to the coronavirus pandemic, looks on during a joint press conference with the French president in Baghdad on Sept. 2, 2020. - GONZALO FUENTES/POOL/AFP via Getty Images

Mustafa al-Kadhimi’s government is working on presenting an economic reform plan in the coming days, at a time when Iraq faces complex economic crises most notably related to the need to secure $3.6 billion per month in salaries for about 6.5 million employees and retirees, a government source told Al-Monitor.

Iraqi Finance Minister Ali Allawi was supposed to present the economic reform proposal to the House of Representatives on Sept. 15, but he did not, arguing that he is awaiting the approval of the domestic and foreign borrowing law. He promised to submit the proposal by the end of this month.

An Iraqi government source told Al-Monitor, “Ali Allawi, Iraq’s deputy prime minister and minister of finance, is working on the economic reform proposal with the help of independent experts. We believe that Iraq is in constant need of economic reform, and this is not easy, especially considering the current circumstances. However, these challenges do not necessarily impede reform. When our economy was in good shape and we were selling oil at a price of $120, there was no reform. On the contrary, corruption was rampant. Therefore, these challenges may impose economic reform on everyone.”

He added, “The government cannot create in a short period of time new financial resources other than oil, so it is working to fully control the border crossings to support the state budget. Also, Iraq is controlled by a political class that poses a challenge to reform, so the government needs independent decisions that do not necessarily go through the Iraqi parliament.”

The reform plan is supposed to include amendments to the salary scale, put an end to the discrepancy in salaries of state employees, and organize both the payrolls of retired employees and the Federal Service Law. This plan has garnered both domestic and foreign support and has been even backed by Ayatollah Ali al-Sistani who, on Sept. 13, said “serious and exceptional steps in combating corruption” must be taken.

On Sept. 13, the Iraqi Ministry of Finance website cited US Ambassador to Iraq Matthew Toller as expressing his country’s full support for the plans and procedures the Iraqi government is following, especially in regard to reforming and developing the economic and financial sector under the current circumstances.

However, the road to economic reform is lined with ruts amid the drop in oil prices and Iraq’s commitment to reducing its production in accordance with the OPEC+ agreement. This infers that Kadhimi’s government will be in constant need to borrow because public employees’ salaries cannot be fully available from the sale of oil. In the past two months, Iraq achieved $7 billion in revenue from the sale of oil, which is the amount it needs to pay employees’ salaries alone.

Iraq’s former Oil Minister Ibrahim Bahr Al-Ulum told Al-Monitor, “The current government is bearing the burden of the previous government’s pledge to reduce oil production in accordance with the OPEC agreement, and this will harm Iraq and may cause it to lose $50 billion during the next two years.”

“The reform that Kadhimi’s government is working on requires bold and harsh steps, and the country may not bear it at such a stage, especially with regard to reducing expenditures. So the government must focus its political and diplomatic efforts to get rid of the OPEC+ agreement burdens,” Bahr Al-Ulum said.

Allawi expected the Iraqi economy to contract by 7 to 9% this year, a figure that exceeds the International Monetary Fund’s (IMF) earlier forecast of 4.7%. This infers that the challenges facing the reform project Allawi is supposed to offer are very great.

Ali al-Mawlawi, a former researcher at Al-Bayan Center for Planning and Studies, told Al-Monitor, “The Iraqi government has not allocated sufficient political capital to overcome the economic crisis. The Minister of Finance may be fully committed to economic reform, but without sufficient support from the rest of the ministers, it will be very difficult for the government to overcome the political blocs resisting reform.”

“The government needs to be realistic about what it can achieve in the limited time it has left without deviating from issues that are no less important than salvaging the economy,” he added.

Kadhimi’s government is facing a major economic crisis left by the government of Adel Abdul Mahdi that worsened when the coronavirus pandemic affected the livelihood of Iraqis. Kadhimi tried to cut the salaries of employees but failed to do so. His plan to impose taxes failed after a wave of popular protests was accompanied by political opposition that prompted him to back down from such a plan.

Kadhimi is now working to control the border crossings, whose annual revenues are expected to amount to about $10 billion, according to the Economy Committee in the Iraqi Council of Representatives, as this would help him overcome a portion of the deficit plaguing the country’s budget and secure the salaries of state employees.

The government is now seeking to borrow about $5 billion from the IMF and $8 billion from internal banks. This indicates the size of the economic burden it faces and reflects its inability to reduce government expenditures. Over-staffing over the past 15 years has exhausted the Iraqi state. These jobs were always used for electoral purposes.

When Allawi visited London last month, he signed a memorandum of understanding with the British government on “technical support for economic reform.”

Al-Monitor learned that Allawi focused during his meetings there on supporting Iraq in the economic reform project and requested British support.

In other words, the reform plan that Kadhimi’s government will present will not be of any significance unless Kadhimi receives prior political backing for his decisions and steps through the House of Representatives. Parties opposing his views can easily mobilize the street against him if he considers cutting employees’ salaries or imposing taxes. More than half of the active community in Iraq has been hired in state institutions through parties.