Several countries are forming an economic alliance to help Iraq in its financial crisis. 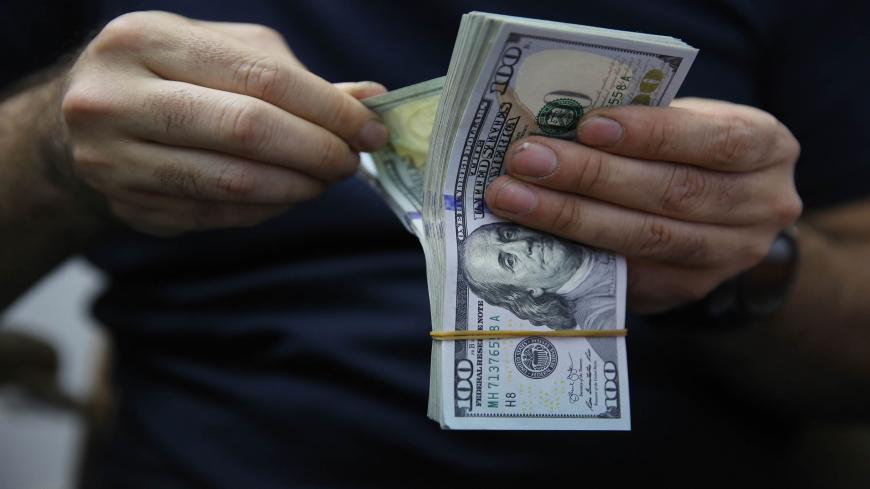 A man counts a pile of US dollar bank notes in the capital Baghdad, Iraq, May 4, 2020. - AHMAD AL-RUBAYE/AFP via Getty Images

Following months of struggle between the Iraqi government and the parliament, the latter approved Nov. 12 the deficit law that allows Iraq to borrow 12 trillion dinars ($10 billion), which would only provide Iraq with three months to pay the salaries of public servants.

The Iraqi government at the same time is looking for other sources of money.

Finance Minister Ali Allawi said Nov. 4 that the newly established international financial alliance would help Iraq retrieve $150 billion in funds stolen from the country since 2003, adding that the money is deposited in foreign and Arab banks and that the alliance would provide the technology and expertise to support the economy.

While Prime Minister Mustafa al-Kadhimi and a number of ministers were visiting London, an international financial alliance dubbed the Iraq Economic Contact Group was established Oct. 22. It consists of the G-7 countries, the International Monetary Fund (IMF), the World Bank, the European Bank for Reconstruction and Development, the Iraqi Finance Ministry, the Central Bank of Iraq and the Finance Committee.

The alliance will convene every three months to monitor the progress made in the Iraqi economy, and will present a road map to support priorities in terms of reforms, mobilize international support and make use of international expertise to enhance economic stability and add vital changes to achieve economic growth. The alliance is set to operate for three years.

Iraq is facing a stifling financial crisis, after oil prices dropped due to the coronavirus pandemic. According to the 2020 budget, Iraq needs $62 billion, $45.8 billion of which is for the salaries of public workers, their pensions and social benefits, while $6.6 billion is needed for the payments of internal debt and eurobonds. The remaining amount will be allocated to foreign oil companies and subsidies programs, also known as the ration card, electricity imports and to cover the expenses of some ministries.

Allawi told Al-Iraqiya Channel Nov. 4 that the alliance will provide experts on managing economic sectors and that they will serve as advisers to the government, mainly focusing on fixing the economy and improving the public and private sectors’ administrative performance. He noted that Iraq is going through a difficult economic time because the state’s finances are out of control, and reforms must be achieved. He added that should the status quo persist, it would open the way for political and security unrest.

Allawi said that it is in the interest of many countries to assist Iraq and put its economy on the right track, particularly since the country consists of a promising market for Western investment. He stated that the alliance will help Iraq recover the money stolen before and after 2003, amounting to more than $150 billion, since the current political establishment emerged.

At the Tokyo summit in May 2016, the G-7 formed a financial alliance to support Iraq at the economic and financial levels, and provided $5.2 billion in loans through the IMF, along with a two-month reform program. In addition, a conference for the reconstruction of Iraq was held in Kuwait in November 2018.

Iraq is a member of the OPEC that signed with other non-OPEC oil-rich countries, including Russia and Azerbaijan, an agreement called the OPEC+ agreement. The current second phase of this agreement provides for Iraq to cut oil production by 849,000 barrels per day. Oil revenues, which the Iraqi budget depends on for 93%, declined from $6.4 billion this time last year to $3.5 billion per month, as a result of the decline in exports and falling oil prices. Hence, Iraq needs $5.16 billion per month to meet its basic budget expenditures.

Ahmed al-Haj, a member of the parliamentary Finance Committee that is part of the newly formed financial alliance, told Al-Monitor that the international financial alliance consented to the request to exempt Iraq from the OPEC+ obligations, and added that consultations between countries will kick off within days. He noted that the international financial alliance will provide consultations, without loans, because most countries around the world suffer from a financial crisis due to the coronavirus pandemic. He added that Iraq’s credit rating stands at B-, which does not qualify the country to obtain external loans.

Haj noted that the country resorted to foreign expertise because the solutions put forward by Iraqi academics to address the crisis were hard to implement.

Iraq’s debt stood at $133.3 billion in September, and constitutes 80% of the gross domestic product (GDP), which exceeds the red line of the 60% debt-to-GDP ratio.

The Kadhimi government released a white paper for economic reforms that consists of a vision to resolve problems in the non-oil sector, reduce dependence on oil by 93% during the next three years and activate the private sector’s role.

Ahmed al-Tabaqchali, a professor at the American University in Sulaimaniyah, told Al-Monitor that the expenditures are substantial and cannot be covered by the budget revenues. He indicated that the white paper for economic reform shows the international community that Iraq is serious about reforming its economic and financial situation.

He underscored that the international community does not want to see timid reforms, as was the case in the past, and noted that the new international alliance may prompt the IMF to sign a new loan agreement with Iraq, involving reforms and loans, which will give the country the opportunity to obtain loans from foreign countries with an IMF guarantee.

Tabaqchali pointed out that the alliance will help Iraq in the technology and governance fields, and help it implement measures to control non-oil revenues, such as tax and border crossings revenues. He explained that Iraq cannot bear additional debts without the new alliance.

Nabil al-Marsoumi, a professor of economics at Basra University, told Al-Monitor, “The establishment of this alliance means that the advisory body at the council of ministers is ineffective and the economic staff at the finance and planning ministries failed to find effective solutions to the current financial crisis.”

He added that, according to the government's expression, it is obliged to contract with foreign parties to import solutions, just like the other goods that Iraq imports from abroad, even though the government released the white paper, which is important to add changes to the economic path the country has taken.