Five Israeli fencers who still serve in the army were allowed this morning to travel to Turkey for the European Championships despite the severe travel warning issued by Israeli authorities on Monday. 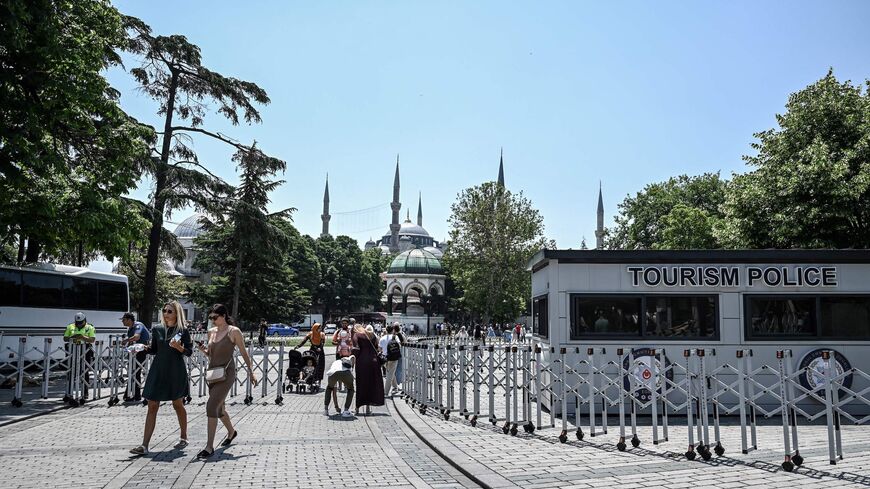 Tourists pass through a police checkpoint in Istanbul as the Blue Mosque and Hagia Sophia Mosque are surrounded by a police fence for security reasons, on June 14, 2022. Israel's Foreign Minister Yair Lapid on June 13, 2022, urged citizens in Turkey to leave "as soon as possible" over threats that Iranian operatives are actively planning attacks on Israelis in Istanbul. - OZAN KOSE/AFP via Getty Images

The National Security Council ranks traveling to Turkey at a combined level 3 to 4, which is almost the highest level of warning. Istanbul is ranked 4, with the rest of Turkey ranked 3.

“In light of the escalation in Iranian intentions to harm Israelis in Turkey, with an emphasis on Istanbul, the National Security Council is calling on Israelis staying in Istanbul to leave the city as soon as possible. There is a moderate threat warning for the rest of Turkey, and it is recommended that Israelis also avoid travel that is not essential to the rest of Turkey.”

Authorities say that warning against nationals traveling to Turkey is expected to remain in effect until an Iranian terror cell is caught. Reportedly, Israeli and Turkish security agencies are both working to thwart any potential attack. Israeli media reported yesterday that Ankara has conveyed a “blunt and forceful message” to Tehran that it will not allow Iran to use its territory to carry out terror acts against other countries.

On Monday, Foreign Minister Yair Lapid urged Israelis to leave Turkey and for those planning a vacation there to cancel it. Later on, reports came out about Israeli security agents whisking Israelis out of Istanbul and bringing them back to Israel. The tourists were told they were at an immediate threat by Iranian agents and should not go back to the hotel where they were staying in fear for their lives.

Yesterday, Lapid spoke on the phone with his Turkish counterpart, Mevlut Cavusoglu, thanking him for his country’s efforts to protect Israeli tourists against Iranian agents targeting them.

After Lapid’s call for Israeli tourists to come back from Turkey, the Israel Defense Forces issued a similar call to Israeli officers on vacation there. The army said it was canceling any future permits allowing soldiers to visit or even take a connecting flight via one of Turkey’s airports.

Reports said that the IDF notified the Israeli national fencing team that five of its athletes who still serve in the army could not travel with the delegation for the European Fencing Championships in Antalya, Turkey. Still, after pressure from senior sports officials, the IDF changed its mind, enabling the athletes to depart. Israeli media reported earlier today that the fencing team arrived at Antalya under especially heavy security measures.

Israel’s soccer team Maccabi Netanya is scheduled to play against Turkish Basaksehir in Istanbul on July 21. It is still unclear if Israeli fans would be able to attend the match.

Turkish authorities are evidently concerned over the possible impact the Israeli warnings could have on tourism to the country. Until a decade ago, Istanbul, Antalya and other Turkish locations were considered the most beloved tourism destinations for Israelis. As the diplomatic rift deepened, Israelis stopped traveling to Turkey. The rapprochement between Ankara and Jerusalem over the past year changed that, bringing back to Turkey Israeli tourists.

On Tuesday, Cavusoglu said his country was safe for tourism, noting that "we continue to fight terrorism very effectively and all precautions are being taken." Turkey’s Chief Rabbi Ishak Haleva also said yesterday that “there is a lot more noise than actual threats” in the country to Israelis. Haleva told The Jerusalem Post that “there was an issue that occurred, [and] the State of Israel rose to its feet — and rightly so. Otherwise, they would be responsible if something happened and they didn’t warn about it beforehand.”

Reports in Israeli media say that Israeli tourists and Israelis seeking cosmetic and medical treatments in Turkey keep traveling to the country despite the warnings.