Israeli security whisks nationals out of Turkey over Iranian plot

Several Israeli tourists have been taken out of Turkey amid warnings of planned Iranian attacks. 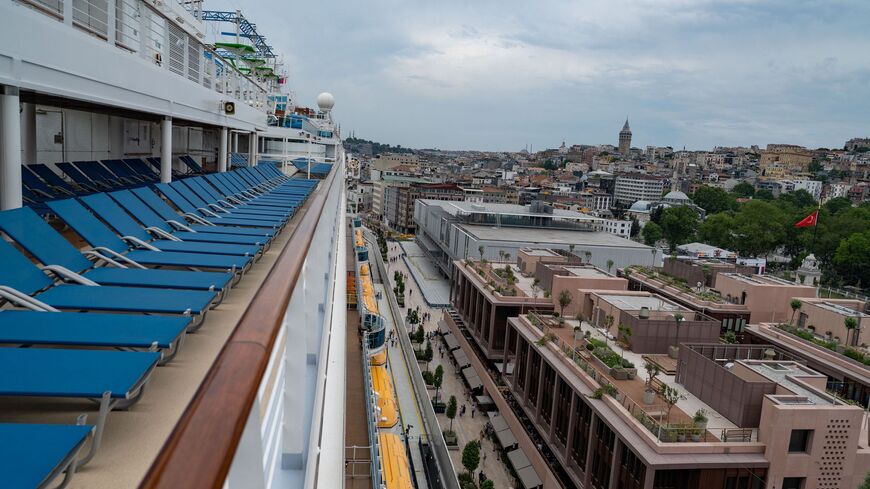 Galataport is pictured from The Costa Venezia cruising ship moored in Istanbul, on June 6, 2022. - YASIN AKGUL/AFP via Getty Images

The scenes described this week by Israeli tourists whisked out of Turkey by secret agents to escape Iranian assassins sounded like something out of an action film.

Channel 13 News reported June 13 on a call received by an Israeli couple from a person described as a senior intelligence community official. “He asked us where we were. We said we were touring a bazaar. At first, we thought someone was pulling our leg, but then we realized this was serious. He asked us to stop where we were, avoid standing out and wait quietly at a certain corner. We asked to go back to our hotel to pick up our things, but we were told not to go there under any circumstances because terrorists were waiting there to kill us. Within 15 minutes, a van stopped next to us. There were at least 10 Israeli security people or agents inside. They told us that Iranians were waiting at the hotel to kill us and that we were going directly to the airport.”

According to the report, the two were taken to Ataturk Airport, where they boarded a plane waiting to fly them to Israel. Back home, they went through a meticulous debriefing and were asked about all their contacts, calls and even random encounters in Istanbul.

The Israeli press has reported that several other tourists have been pulled out of Turkey in similar fashion in recent weeks. A top-level intelligence official confirmed the reports to Al-Monitor on condition of anonymity, adding, “The real drama is even bigger. Iran deployed several assassination squads in Turkey whose mission was to kill or kidnap Israelis at almost any cost. All of these attempts have been foiled so far, some of them at the very last minute.”

On June 13, Foreign Minister Yair Lapid described these developments in a stark warning to Israelis planning holidays at the popular tourism destination. “The Israeli security agencies, the Ministry of Foreign Affairs, the prime minister's office have all participated in recent weeks in a tremendous effort that saved the lives of Israelis. Some of them have returned to Israel and are wandering among us without knowing that their lives had been saved.” Lapid added, “If you have planned a flight to Istanbul, cancel. No vacation is worth your life and the lives of your loved ones.”

Reports also say that the Mossad, with the close and unprecedented assistance of Turkey’s intelligence and security services, has been instrumental in capturing several of these Iranian cells in recent weeks. Nonetheless, the threat persists to the extent that Israel’s Counter Terrorism Bureau upgraded its travel warning this week to level 4, the highest, for Israelis planning trips to Turkey.

Even so, Ben-Gurion Airport still had long lines of Israelis checking in for flights to Istanbul and to Turkey’s southern Mediterranean resorts, determined to get on with their lives even under threats from those intent on ending them.

According to Israeli intelligence assessments, Iran is seeking to avenge a series of alleged assassinations of senior officials on its own soil in recent months, some of which it has blamed on Israel.

In the latest such incidents, the Iranian press has reported that two officers from aerospace units within Iran's Islamic Revolutionary Guard Corps and the country's Defense Ministry have been killed. They were identified as Ali Kamani and Mohammad Abdous and said to have died in separate incidents in Markazi and Semnan provinces, respectively. The New York times reported on June 13 that Iran believes Israel killed the two by poisoning their food. On May 22, Iranian Col. Hassan Sayyad Khodaee was fatally shot outside his central Tehran home. Iran, humiliated time after time by this series of alleged killings, apparently decided to strike back.

Israel believes the threat to Israelis in Turkey is clear and imminent. “Several of these cells have already been stopped,” another senior Israeli security source told Al-Monitor on condition of anonymity. “The others are being hunted. At some point, not long from now, we will be able to sound the all-calm regarding Turkey. Right now, anyone who is there should simply leave as fast as possible.”

The travel warning upgrade was announced on June 13, but the decision was made the day before. “It took time to coordinate,” a senior Israeli intelligence source told Al-Monitor on condition of anonymity. “We did not want to insult the Turks and we are not doing anything without consulting them. On Sunday, calls were conducted between leaders and heads of intelligence agencies — excellent conversations, truly heartwarming — and on Monday, we issued the announcement. This announcement evidently has economic implications for tourism, but the Turks understand us. Terrorists are walking around with their weapons cocked. We hope this will end very soon.”

Turkey may soon return to business as usual, and the energetic Israeli tourists will probably return en masse. But the intensifying war between Israel and Iran shows no signs of abating and may do quite the opposite. With the prospects of a nuclear agreement receding, the two sides are rattling their sabers. The Iranians have been taking most of the hits, on their soil. This week a mysterious air force bombed the runways of the international Damascus airport, forcing its closure. This is the air field where Israel believes Iranian planes deliver weapons, ammunitions and other components for Hezbollah’s missile project. There is certainly more to come.