The arrest of Salem al-Sabah, head of the University of Palestine in the Gaza Strip, sparked widespread condemnation among academics. 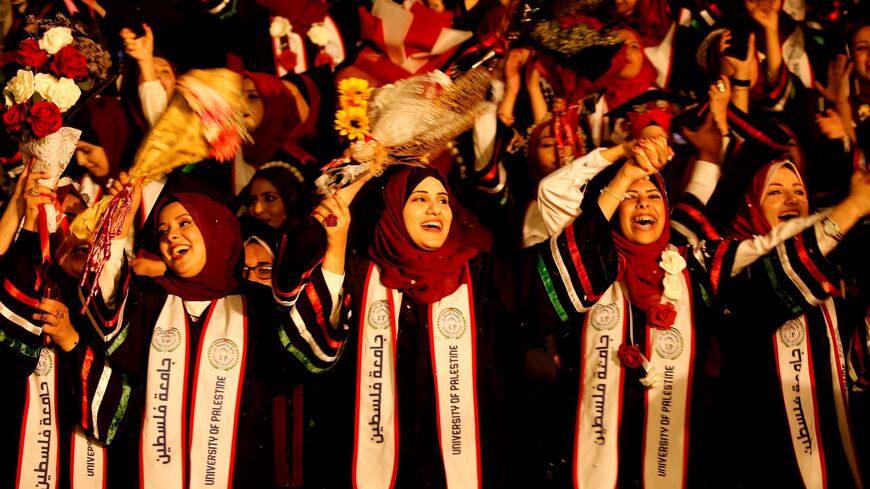 Students from the University of Palestine celebrate their graduation during an annual ceremony, Gaza City, Gaza Strip, July 13, 2019. - MOHAMMED ABED/AFP via Getty Images

Hamas security forces recently arrested Salem al-Sabah, head of the University of Palestine in the Gaza Strip, causing an uproar among academics who praise Sabah's performance.

The arrest was carried out June 15 by members of the military police without any arrest warrant, which is against the Palestinian law. According to the Palestinian Criminal Code, the Public Prosecution is the only authority concerned with initiating criminal cases.

The military police’s arrest of Sabah, a civilian, thus provoked an outcry across social media, with many users denouncing the episode as a "kidnapping.”

According to posts on social media by academics close to Sabah, he was arrested when Youssef Hassan, a Palestinian journalist living abroad, accused Sabah of corruption, embezzlement and forging university diplomas.

According to the same accounts, the journalist has previously exposed figures close to Hamas and accused them of money laundering and corruption.

Meanwhile, Hamas did not comment on the arrest to the media, nor did the Ministry of Interior, which carried out the arrest.

Ibrahim Abu al-Naja, Palestinian Authority-appointed governor of Gaza, who expressed full solidarity with Sabah, told Al-Monitor, “We always strive to have a solid and clean educational process in Palestine. … But what is happening in some universities is shameful, unprecedented and alien to our policies, especially with regard to forging diplomas or certificates.”

“I expressed solidarity with Sabah. I believe some issues occurring in universities should not be dealt with in the media, but only by experts and specialists. It is important that we preserve our reputation and cultural and scientific heritage. Our children must obtain their degrees from universities that we are proud of,” he added.

Shortly after Sabah’s arrest, the University of Palestine issued a statement condemning the incident. Sabah's family also denounced the “illegal and arbitrary arrest.”

The president of the Palestine Technical University Kadoorie in Ramallah, Nour Abu-Rub, told Al-Monitor that the arrest “is shocking news for every academic. An arrest warrant should have been issued by a judicial authority.”

He continued, “What has been circulated in the media is misleading. I will make sure to raise the issue during the UNIMED meeting in Jordan" on June 22-23 of representatives of universities from Europe and the Middle East, when participants "are expected to condemn these barbaric methods committed against academics in the Gaza Strip.”

Ahmad Joudeh, political activist who works at the Media Center of An-Najah University in Nablus, told Al-Monitor that he “strongly condemns the arrest of the University of Palestine president without a legal arrest warrant, especially since there was not enough evidence to convict Sabah.”

He added that the family’s statement, which explains what happened on the university campus, accused influential people within Hamas of wanting to control the university.

“Sabah was also arrested during a very critical period, when students are taking their final exams, and at a time rumors that the University of Palestine is forging university degrees have been making the rounds,” Joudeh said. "This is harming the university’s reputation."

The recent report "did not bring anything new to the table," he said. "This issue has been pending for years between the Ministry of Education and the University of Palestine, which explains the general outcry against this arbitrary arrest.”

Joudeh pointed out that "journalist Youssef has had several reports about corruption of people affiliated with Hamas and presented evidence to this effect, but nothing has been done and no one was arrested." Instead, he said, Youssef was threatened and left Gaza. "So why was Hamas now very quick to take action at the University of Palestine, without enough evidence? This reinforces the political division,” he added.

Since Hamas’ takeover of the Gaza Strip and the removal of Fatah officials from the enclave in 2007, the movement has been seeking to impose its control on all institutions affiliated with the rival Fatah movement, either by force or illegally. Regarding Sabah's case, according to observers, the Hamas-controlled government has no right to interfere in the University of Palestine, which is a private institution and not a state university — rather there are specialized committees that would solve problems inside the university. However, Hamas took advantage of the reports about corruption in order to seek to control the university and share its management with Sabah.

In the wake of the arrest, some websites and online pages were quick to spread rumors slandering Sabah’s reputation, which is a crime punishable by Palestinian law.

Sabah is a prominent academic figure in Gaza. He was the director of the Palestinian Monetary Authority and then held the position of director general of the Islamic Bank, and he opened branches for the bank in the West Bank and the Gaza Strip. This was before he became the current president of the University of Palestine. He is known to be close to the Fatah movement.

At the University of Palestine campus, professors and students alike expressed their regret for what happened to Sabah, calling for an investigative committee to look into the accident and acquit the university president.

Radwan Abu Hasira, administrator at the University of Palestine, also expressed his regret. “The president of the university was treated with obvious disdain, which proves nothing but the barbaric approach of those in power and disregard to his position,” he told Al-Monitor, calling for mobilization at home and abroad “because this is an obvious violation of a human right, and disrespect for academics.”

“No charges were brought against Sabah when he was being arrested, which is illegal and in violation of human rights, Sabah was also denied his medication and his phone was confiscated. He was on hunger strike,” Abu Hasira lamented.

He said, “Hamas wants to control every successful institution inside the Gaza Strip in one way or another using force and influence. It wants to share power [management] at the university with its president, which Salem al-Sabah rejected. This is why Hamas is trying in any way possible to control, influence and seize the university by force.”

He added, “Hamas always wants to control by using its influence, and the people are afraid to speak up or express their opinion. Even in the case of Salem al-Sabah, everyone is afraid to go public and tell the media the truth for fear of being summoned or interrogated.”

Just two days after his arrest, Sabah was transferred to a hospital in Gaza after his health deteriorated because Hamas’ security forces refused to give him medication.

Human rights organizations were also quick to call for Sabah's release. Salah Abdel-Aty, head of the International Commission to Support Palestinian People’s Rights, told Al-Monitor, “We condemn the arbitrary arrest and detention of Salem al-Sabah." The group demanded his immediate release, an investigation into the detention and public announcement of the results.