Why the West Bank went silent when Israel attacked Gaza

Following the recent military escalation between Israel and Palestinian factions in Gaza, residents of the besieged enclave have expressed bewilderment and anger at the lack of support for them expressed by West Bank Palestinians. 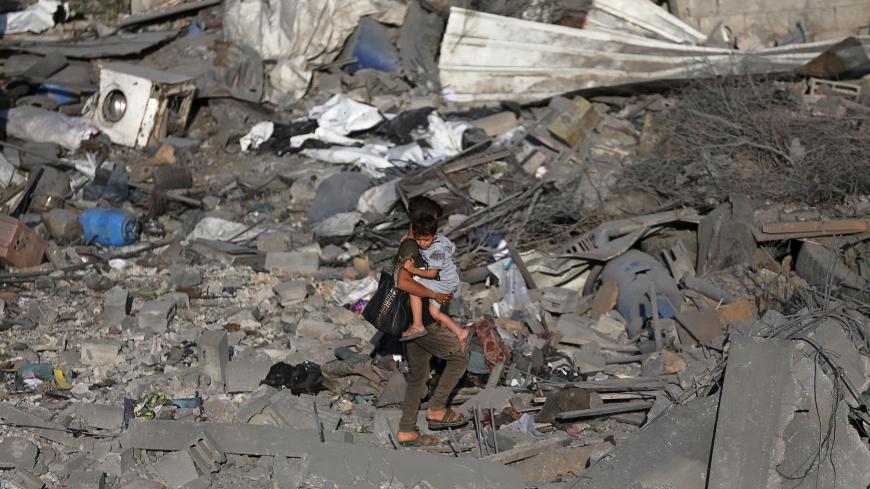 A Palestinian boy carries his brother through the debris of a house destroyed in an Israeli airstrike, Gaza Strip, Nov. 14, 2019. - REUTERS/Ibraheem Abu Mustafa

Amid the recent military flare-up in Gaza, there were no protests, sit-ins or strikes on the West Bank to express support for the Palestinians trapped in the besieged enclave. The lack of public displays of solidarity has reportedly left Palestinians in Gaza angry and bewildered. The military escalation kicked off by Israel's assassination of Islamic Jihad military commander Baha Abu al-Ata on Nov. 12 left 34 Palestinians dead and 111 injured along with 65 Israelis wounded.

Imad al-Frangi, former head of the Forum of Palestinian Journalists in Gaza, published an article on Nov. 17 in the newspaper Felesteen, which is close to Hamas, claiming that Gazans are in shock over the absence of supportive actions on the West Bank. Zakaria al-Agha, former member of Fatah’s Central Committee, wondered in a Nov. 15 Facebook post why this was so, noting that in the past, the Palestinians have reproached other Arabs for being apathetic to their suffering. He went on to say that Gazans had adopted “Ya wahdana” (“Oh we are alone”) as their slogan, borrowing from a poem by Mahmoud Darwish dedicated to Palestine.

Nader Said, director of the Arab World for Research and Development, told Al-Monitor, “Taking it for granted that the West Bank should sympathize with Gaza is not right. Since the 2007 rift, the two societies have split, and they do not share a collective spirit. The West Bank cannot have any influence because of the Israeli domination over it and the control of the Palestinian Authority (PA) over its citizens. Palestinians in the West Bank fear that their sympathy with Gaza might serve Hamas’ agenda, as it holds power in Gaza, or that Gaza’s miserable situation might be passed on to the West Bank.”

Similar charges of alleged indifference or lack of sympathy on the part of the PA were leveled in early May after the Israeli army killed four Palestinians participating in the Great Return March protests on Gaza's border and killed nine more elsewhere in the territory after further escalation. Hassan Asfour, former PA minister of civil society affairs, wrote May 5 for the Amad news website, of which he is editor in chief, that the PA’s silence represents an unprecedented moral decline. He charged its leaders with being oblivious to the fatalities, injuries and destruction and accused President Mahmoud Abbas of sowing division among Palestinian components.

Mahmoud Mardawi, a member of Hamas' National Relations Office, told Al-Monitor, “Criticism of West Bank inhabitants should [actually] target the PA, which bans shows of solidarity with Gaza through its security measures. These prevent West Bankers from performing their national duty by constraining them and legally pursuing anyone who shows solidarity with Gaza. The recent round of escalation curbed the West Bank’s solidarity with Gaza because of the confusing nature of the confrontation and the absence of factional consensus about its management.”

A Palestinian official close to Abbas who spoke to Al-Monitor on the condition of anonymity remarked, “Tackling this issue is not allowed because it divides Palestinians socially, in addition to the political division they are already facing. We stand in solidarity with Gaza in ways we see fit. We are not a tool for any faction for exporting Gaza crises to the West Bank.”

After a cease-fire was announced Nov. 14 quelling the violence, Palestinians on the West Bank held small events in support of Gaza. The factional blocs at Birzeit University organized a sit-in on campus in Ramallah, and students at the Palestine Technical University-Kadoorie, in Tulkarm, also protested on campus. Toward the end of the fighting, Abbas' office issued a standard statement condemning Israel's actions and calling on the international community to intervene.

Mohammad Hamada, former Palestinian prisoner from the West Bank who was deported to Gaza as part of the Hamas-Israeli prisoner exchange in 2011, told Al-Monitor, “West Bank citizens have a rebellious spirit, but Israel and the PA are working on distancing them from Gaza. This has left a deep divide in the way they deal with national issues, which they link to their livelihood, like a work permit from Israel and the bank loans they are drowning in. Security coordination between Israel and the PA blew the whistle on any support for Gaza in the West Bank.”

Gaza’s Palestinians are not asking their compatriots in the West Bank to engage in war with Israel, but at the least they expect them to engage in popular protests and peaceful resistance, including at checkpoints and on the front lines, awareness raising, health and humanitarian support, solidarity campaigns and political action to halt Israeli aggressions against Gaza and to show that the Palestinians remain one. To those in Gaza, it was unacceptable that the official Palestinian television broadcast a FIFA qualifying match, Yemen versus Palestine, on Nov. 14 while the Israelis and factions in Gaza launched missiles at each other.

Imad Abu Awad, a researcher at the Turkish Vision Center for Political Development, told Al-Monitor, “The PA is responsible for [the lack of response] because it considers any action in the West Bank advocating Gaza a form of support for Hamas. Therefore, it banned such action. Sympathy with Gaza has become a moral dilemma for West Bankers, who are mostly not politicized but do not want to oppose the PA. They prefer to keep silent rather than voice support for Gaza, despite the deep pain they feel because of their inability to show support.”

Palestinians in Gaza are convinced that Israel and the PA are banning any demonstration of solidarity with Gaza to show Gazans that they and Hamas are isolated from the rest of the Palestinian community as well as to sustain the PA, maintain security in PA-controlled areas and prevent Hamas from increasing its influence on the West Bank.