Egypt stands ready to unify Palestinian security forces through an organizational overhaul and training, but Hamas may not be accepting of the offer. 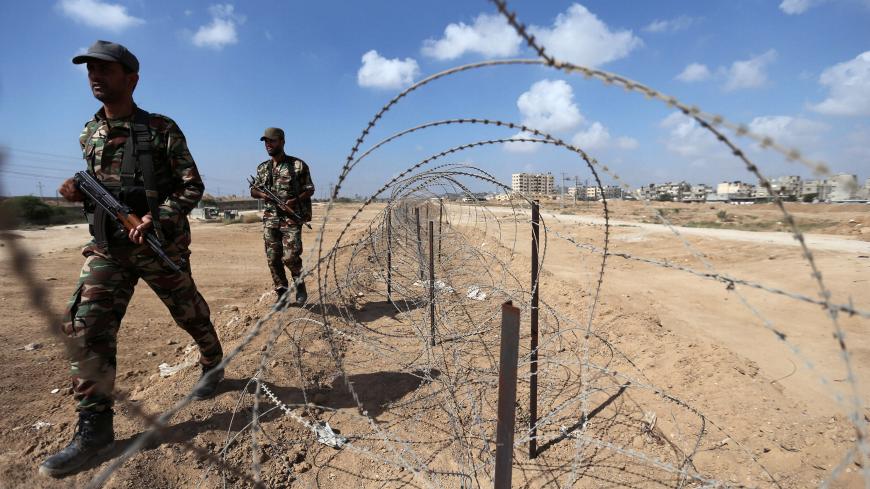 Ahmad Halas, a member of Fatah’s Central Committee and general commissioner for mobilization in Gaza, had announced on Nov. 6 that Egypt will have a role in training the Palestinian security forces and is willing to oversee the reorganization of the entire security structure of the Palestinian Authority (PA).

Hamas political bureau member Khalil al-Hayya told Al-Monitor, “Hamas welcomes any Egyptian role in the delicate security issue as part of a Palestinian-Egyptian agreement on the future of the security structure. During the latest round of talks in Cairo, Hamas and Fatah agreed to merge 3,000 new security officers with the current ones serving in Gaza and to form a joint security committee comprised of eight experts to restructure the security establishment in the West Bank and the Gaza Strip, under Egyptian auspices and Arab supervision.”

Egyptian officials were quoted on Nov. 6 as saying that Cairo will arrange programs for Palestinian security forces in military and police training camps in Egypt. This includes restructuring and rehabilitating the different branches of the security forces, controlling the Palestinian side of the border with the Sinai Peninsula, eliminating armed groups in Gaza that cooperate with Wilayat Sinai militants and unifying Palestinian security institutions in Gaza and the West Bank under the same leadership and devoid of political and ideological issues that could negatively affect performance.

Al-Monitor has learned from Palestinian sources who participated in the Nov. 21 and 23 Cairo talks that Egyptian security officials will soon be visiting Gaza to discuss implementation of PA security control over the territory.

Wasef Erekat, a West Bank military analyst and former commander of artillery forces for the PLO, told Al-Monitor, “Egypt will provide training programs to Palestinian security forces, like the police and civil defense. Yet it will not teach them military skills that could threaten Israel. The idea behind training Palestinian security forces is to transfer the security experience of the West Bank security forces to their counterparts in the Gaza Strip while fully coordinating with Israel. Hamas in its turn cannot ignore Egypt’s security training even though this training is based on the principle of ending resistance operations.”

The security doctrine adopted for the security forces might indeed emerge as a major topic of contention between Fatah and Hamas. Hamas holds that one of the most important tasks of the security forces is to protect the armed resistance and pursue collaborators working with Israel. Meanwhile, Fatah continues to support security cooperation with Israel. In August, President Mahmoud Abbas said he had issued clear instructions for security forces to prevent the planning of armed operations in the Palestinian territories that target Israel. He also said that security coordination with Israel had not been affected by the political stalemate, adding that PA relations with the Israeli security apparatus were better that those with the Israeli political establishment.

In an Oct. 10 press statement, an unidentified Egyptian official revealed some of the details surrounding security arrangements in Gaza, including that a joint committee of Egyptian, Fatah and Hamas representatives would manage overall security. Egypt would assign tasks and provide military supervision. The committee is also expected to include a permanent representative from Egyptian intelligence to follow up and supervise committee operations.

Iyad al-Bazm, spokesperson for the Hamas-controlled Ministry of Interior and National Security in Gaza, told Al-Monitor, “We do not have the details on the Egyptian training for Palestinian security forces. Although we welcome any Egyptian effort in this regard, it should be preceded by merging military and security employees, uniting the security institution and restructuring security bodies through reconciliation talks. Such a process would take a long time and would not be completed before February 2018, as per the agreement reached in October.”

A Palestinian security official in the West Bank told Al-Monitor on condition of anonymity, “Egyptian training for our security forces aims at guaranteeing stability across the Palestinian territories because it trains soldiers and officers in the Gaza Strip and the West Bank on following a unified security doctrine set by the PA’s political program, without succumbing to affiliations to political parties and Palestinian factions. The security situation that has governed the Gaza Strip over the past 10 years was divisive and needs to end once and for all.”

He further remarked, “Egypt also seeks to equip these forces and provide them with wireless devices, vehicles and light weapons in cooperation with donor countries. [The training] might require the recruitment of security, technical and administrative personnel from Western countries who would help in preparing and equipping the security forces.”

Egypt is especially concerned about the fragile security situation in Gaza in light of ongoing unrest in Sinai. The problem was highlighted by the horrific, Nov. 24 attack on the Rawda Mosque in Sinai that left more than 300 dead. No group has thus far claimed responsibility. All the Palestinian factions condemned the killing the day it took place and proclaimed their solidarity with Egypt. In May, Egypt had accused Hamas of sheltering Wilayat Sinai fugitives and others wanted by Egyptian authorities, which is why Cairo might prioritize securing the border with Gaza in the upcoming training of Palestinian security forces.

Hussam al-Dajani, professor of political science at Al-Ummah University in Gaza, told Al-Monitor, “Egypt seeks to train Palestinian security forces to restore the situation that prevailed before Hamas took control of the Gaza Strip in 2007. The training will focus on cementing soldiers’ and officers’ loyalty and obedience to their Palestinian political leaders, represented by the PA. The training will also focus on adopting the same security doctrine that aims at reconstructing collective Palestinian consciousness so that all soldiers from an early age pledge allegiance to President Mahmoud Abbas and his policies.”