No one is watching the events unfold in Egypt as closely as Palestinians in Gaza, whose future is tied to the crisis that its larger neighbor is going through. 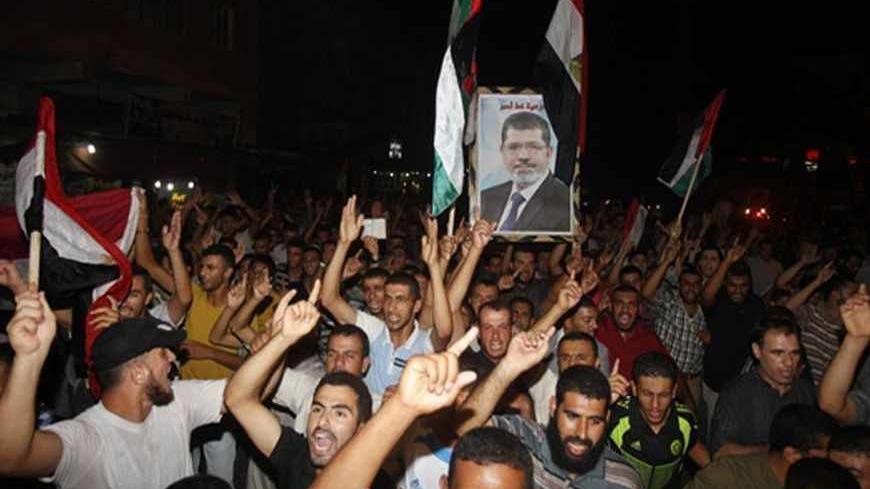 Palestinians take part in a rally in support of Egypt's deposed President Mohammed Morsi and in protest of the recent violence in Egypt, in Khan Younis in the southern Gaza Strip, Aug. 17, 2013. - REUTERS/Ibraheem Abu Mustafa

Gaza's streets were empty as the majority of stores remained closed and most of the Strip's residents were glued to their televisions screens, watching the events unfold of the violent dispersal by the Egyptian army of the Muslim Brotherhood's camps in Nahda and Rabia al-Adawiya squares in Cairo on the morning of Aug. 14.

A surgeon named Talal al-Sharif, 59, was unable to leave his patients, so he simply watched television in the clinic's waiting room along with his colleagues. Everyone expressed their opinion on what was happening, and the likely international reactions that would follow.

Sharif told Al-Monitor that their interest in the fate of the Muslim Brotherhood — which, surprisingly, took the reins of power in the Arab world after the recent spate of revolutions — stems from Gaza's proximity to Egypt and the fact that both were ruled by the same group. This lends a special urgency to events now unfolding in Egypt for Gazans, in comparison to residents of other countries.

Abu Ahmad, 45, works in the basement of the Al-Khazandar building. As he started his antiquated computer, employees from neighboring offices formed a circle around him to follow the live stream of one of the Egyptian television channels.

That same afternoon, a group of youth spontaneously gathered in Palestine Square, following calls made on social networking sites for them to stand in solidarity with those who fell victim to the breakup of the sit-ins in Cairo.

One of the participants was youth activist Barra Nazzar Rayyan. "We feel real anger at what has transpired in Egypt, which is made worse by our inability to do anything about it. This has prompted us to gather spontaneously for a moment of solidarity," he told Al-Monitor. Rayyan denied that the young men and women participating were following Hamas' calls. He added, "Had Hamas called for a moment of solidarity, the gathering would have been different, and there would have been hundreds of participants."

Rayyan is known for his opposition to some government policies, despite him being the son of a senior Hamas official. As far as he is concerned, the dispersal of the protest in Rabia al-Adawiya was a genuine massacre. "It strongly resembles what has happened to the inhabitants of Gaza in the previous two wars, even if the identity of the [attacking] army was different," he added.

Gazans expressed clear interest in following news of the sit-ins' dispersal — including those who supported the Egyptian army and those who were furious with it. Nevertheless, diplomatic language dominated the statements issued by the Hamas-led government in Gaza, which is also the Palestinian branch of the Muslim Brotherhood.

Government spokesman Ihab al-Ghussein told Al-Monitor in a phone conversation, "The government in Gaza strongly condemns and rejects the Egyptian authorities' targeting of peaceful protesters. We express our pain and sorrow at the precious Egyptian blood that has been shed."

"Hamas' position toward the Arab and Islamic peoples and their right to a life of freedom and dignity remains unchanged, and we call for the bloodshed to cease and for peaceful protesters to be dealt with in a nonviolent manner," he added. He expressed the government's sincere condolences to the Egyptian people and the families of the victims.

Regarding Gaza’s interest in what is happening in Egypt, he said, “This goes back to the geopolitical, historical and social link [between the two peoples]. The biggest supporter of the Palestinian cause is Egypt, which is considered Gaza's gate to the world."

The public's interest in the breakup of the sit-ins had not waned the following day, and at 8 p.m. on Aug. 15 a group of young men and women — accompanied by foreign protesters — carried Egyptian flags and candles and observed a moment of silence in solidarity with the victims of Egypt at the Unknown Soldier Square in the center of Gaza City.

One of the participants, Mohammed Hasna, told Al-Monitor, "We consider this moment of solidarity to be for the sake of humanity in Egypt and to preserve Egyptian blood." He stressed that the participants supported different parties and movements, and that the gathering was not called for by one group in particular.

Iman al-Shanti, 25, observed the moment of silence along with her son, carrying three candles. "We are carrying candles in silence in solidarity with humanity and peace, and to show our opposition to the massacres that occurred, particularly given that children and unarmed protesters were targeted," she told Al-Monitor.

Hamas' reaction to the events in Egypt did not go beyond this gathering and statements condemning the massacre. According to a source within Hamas — who preferred to remain anonymous — there are a number of discussions going on within the movement, and the general consensus is that they should oppose organizing any official marches called for by Hamas.

Speaking to Al-Monitor, the source added, "We can sense the extent of anger among the public, and we, too, are angry and sad. However, it is society as a whole that will bear responsibility for our reactions, thus [our reactions] must be very calculated given that we are a normal faction. The general public will pay the price for any action."

He noted that they were content with the march organized by the Hamas-affiliated Muslim Scholars Guild, which was held on Aug. 14 and included Hamas members of parliament, as well as the gathering held by the Legislative Council in solidarity with the martyrs.

Political analyst Ibrahim Abrash believes that Hamas' stance regarding the massacre is a product of the movement's rationalist wing, which is contemplating a re-evaluation of its relations with the Muslim Brotherhood. Foremost among them is head of Hamas' political bureau Khaled Meshaal. On the other side stands the radical wing, which wishes to plunge it into a new military adventure.

"Hamas now has two choices: either it will resort to jihadist activity and return to resistance — which will cost it a great deal — or it will head toward reconciliation with Fatah, offering concessions to do so. The next step would be for President Mahmoud Abbas to reach out his hand to Hamas for reconciliation," Abrash — a known critic of Hamas and former Gaza-based minister of culture in Salam Fayyad’s government — told Al-Monitor in an interview.

Gazans are following the events, and believe that the coming period will determine the future of the region and that of the Gaza Strip in particular. This is particularly true given that the Egyptian authorities announced the closure of the Rafah crossing on the morning of Aug. 15, closing Gaza off once again from the rest of the world.