Egyptians are divided over whether Cairo's pro-Mohammed Morsi sit-ins should be allowed to continue or be broken up forcefully. 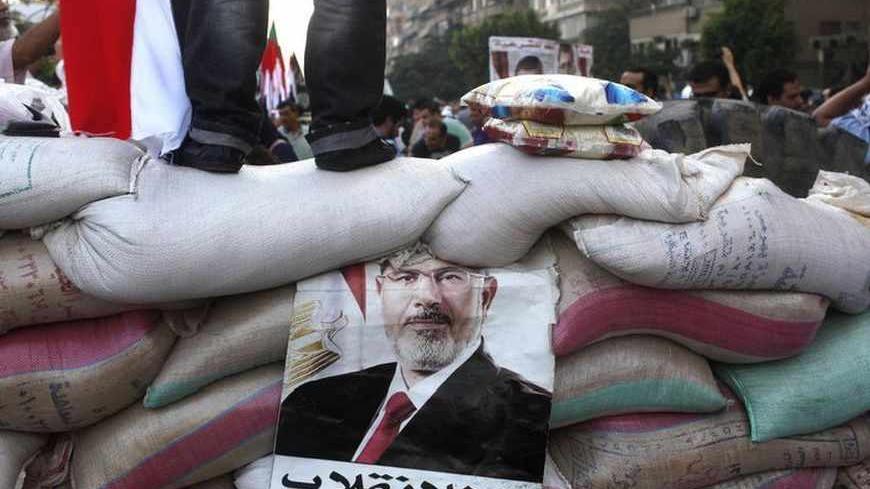 A poster of deposed Egyptian President Mohammed Morsi is seen on a makeshift barrier of sand bags made by members of the Muslim Brotherhood to protect the sit-in at Rabia al-Adawiya Square in Cairo, Aug. 8, 2013. The poster reads, "No to the coup." - REUTERS/Asmaa Waguih

Eid al-Fitr, the Islamic feast that comes the first day after Ramadan, is typically a festive day in Cairo. Families get together or take to the streets, there is insanely loud music everywhere, impossibly energetic kids run around in new clothes while their incessant firecrackers create the illusion of a war zone, and the television is filled with the familiar lighthearted material and some new releases. And there were indeed many of these regular features of the occasion yesterday, but it was all visibly more limited than usual, much more subdued. The gloomy mood is a result of a politically tumultuous Ramadan and also the tense anticipation of one particular event: whether or not the government will try to break up Cairo's two major pro-Mohammed Morsi sit-ins at the Rabia al-Adawiya and Nahda squares.

The act is largely seen by people as either an impending disaster or a decisive action worthy of celebration. It has been my personal experience that the second camp is more prevalent in Cairo. And with the recent round of international diplomatic mediation efforts officially declared as having “ended” without any noticeable breakthroughs, and with the government and media rhetoric becoming  noticeably sharper over the past few days, many theorize that the break-up effort will perhaps take place within days.

Within the pro-June 30 camp, the debate over dispersing the sit-ins has been hotly divided. Those who want the sit-ins dispersed refer to supposed evidence of weaponry and acts of torture at the sit-ins. They believe that the lives of Rabia-area residents are becoming paralyzed, given the depth of the sit-in, on top of residents' alleged complaints of intimidation and assault. The Nahda Square sit-in has been at the heart of violent outbursts in this area, with each side naturally blaming the other for instigating events. Most of the media have staunchly supported breaking up the sit-ins, further fueling the passions of those adopting this side of the argument.

But it has been my argument that breaking up the sit-ins by force, despite the arguments voiced in support, would be overall a dangerous and counterproductive course of action, especially from the viewpoint of decision-makers in Cairo. If I were to assume their point of view for the rest of this argument, and not speak from a more neutral perspective or refer to debates on of freedom of speech, then here’s why:

First, if the actual target is indeed to “end” the sit-ins, then experiences in Egypt over the past two and a half years show that using force would do just the opposite. Almost every major sit-in or demonstration that was subjected to force ended up regrouping, growing in size and radicalizing. In some cases, the protests even managed to attract wider public sympathy. The two major violent events at the Rabia sit-in produced similar results, increasing the intensity of the sit-in and causing the dominant rhetoric to become even more uncompromising, potentially even gluing together a shaken Brotherhood. The events have also brought wider local and international sympathies to a once increasingly isolated Muslim Brotherhood. Then, following any possible dispersal, it is possible to just relocate the sit-ins, where they would either be left alone due to the fallout from the first break-up effort or be broken up again, causing the cycle to repeat itself.

On the other hand, virtually every sit-in since 2011 that was left to its own momentum either withered on its own or became ineffective. The 2011 July 8 sit-in that was effectively dispersed by force was an exception for several reasons, including the dwindling number of participants, the perception that it had already achieved many gains and the timing of the first day of Ramadan. The experience of the Gezi Park protests in Turkey adds to that argument.

Then, there would be the issue of potential violent reprisals. The majority of Islamists in Egypt do not believe in violence, but there is a definite subset that is willing to resort to violence, if deemed necessary. The rise in attacks on Sinai army checkpoints is an important indicator of this trend. The act itself of forcefully going after the sit-in would likely be enough to trigger those who are capable of conducting an extended campaign of violence. Other than the damage and victims that would result from this scenario, Egypt would also very likely find its struggling tourism industry squashed, which is something that Egypt cannot handle. Furthermore, the return of some police state would almost be inevitable.

Most importantly, the number of human losses and injuries resulting from a break-up effort would be substantial. Even assuming no weaponry is used and the operation was well-planned, the stampede alone in such a crowded setting would likely result in a large number of victims. Setting aside how nationally traumatizing this would be, and how it could radicalize so many, there would be three other results.

First, the potential for political compromise with the Brotherhood or the Islamists — including the Nour Party, which has thus far remained a part of the current June 30 road map, but is coming under growing pressure — would effectively disappear.

Second, given that the majority of Egyptian voters seem to be non-ideological swing voters, the June 30 camp could lose a considerable swathe of voters to apathy or even to Islamists again. (Islamists remain, despite everything, far more organized electorally than non-Islamists.) Many Egyptians might even join the anti-June 30 demonstrations as a reaction. The reaction of the international community would likely be painful to the new administration in Cairo, and might very well go beyond harsh yet ambiguous speeches.

From the point of view of the decision-maker in Cairo, the most effective course of action is to contain the sit-ins — make sure no more bloodshed occurs while curbing any excesses and dealing decisively with transgressions. Additionally, the best way to create pressure for compromise on the pro-Morsi camp is to move briskly with the road map and the transition to civilian democracy. It would be important for them to realize that there are many at the sit-in who are truly worried about exclusion, their own immediate safety or the return of the Mubarak police state under which many of them suffered. The signals that these individuals have been reading thus far have not been sufficiently encouraging or calming.