Is Culture Ministry Sit-In a Warm Up For Egypt's June 30 Protests?

Egyptian artists and intellectuals have staged a festive sit-in to demand removal of Minister of Culture Alaa Abdel-Aziz and a halt to his “Ikhwanization” policies. 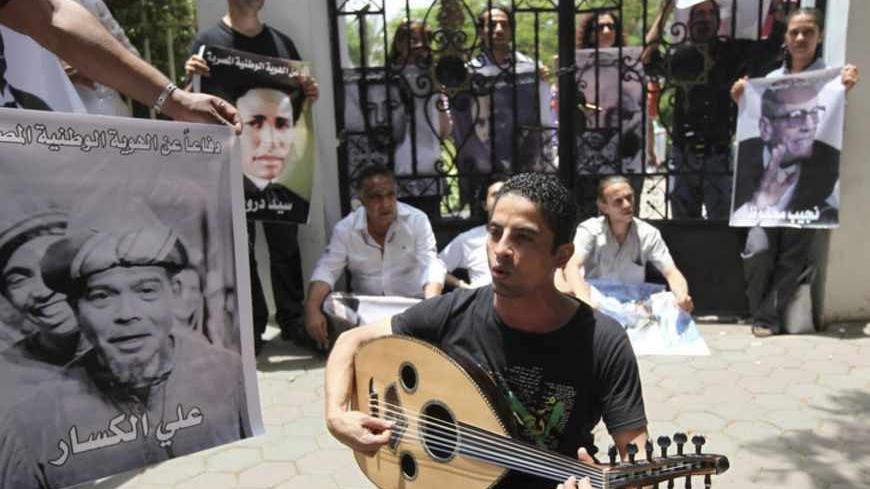 Intellectuals and artists opposed to President Mohammed Morsi hold pictures of popular Egyptian artists and writers as they demonstrate in front of the Ministry of Culture against what they claim is the increasing influence of the Muslim Brotherhood over the Ministry of Culture, in Cairo, June 9, 2013. - REUTERS/Mohamed Abd El Ghany

CAIRO — June 12 marks the one-week anniversary of an ongoing sit-in by prominent Egyptian writers, filmmakers, performers and intellectuals seeking the removal of Minister of Culture Alaa Abdel-Aziz. They broke into the ministry building on June 5 to protest what they see as efforts to “Ikhwanize” the arts.

While the sit-in and accompanying protests in front of the ministry have been peaceful, with artistic performances every evening, the arrival of pro-Islamist counterdemonstrators in the late afternoon of June 11 led to minor skirmishes. Al-Ahram Online reported that the pro-Islamists, some from the Muslim Brotherhood’s Freedom and Justice Party and Al-Gamaa Al-Islamiya’s Building and Development Party, chanted, “Clean up [the ministry], clean up, minister.”

Eyewitness accounts by protesters and residents in buildings overlooking the ministry reported that protesters chased the small group of Islamists away from the building, where there were incidents of rock throwing and beatings of some of the Islamists, including Ahmed al-Mogheer, a Muslim Brotherhood media organizer notorious for smear campaigns, a reputation for instigating violence and targeting outspoken anti-Islamists.

Mohamed Radwan, a media committee member for the sit-in, explained to Al-Monitor on June 11 that the artists and their supporters had received threats the day before from supporters of Hazem Salah Abu Ismail, the populist, hardline preacher and disqualified presidential candidate. The pro-Islamists intended to break up the artists’ protest. In turn, the artists called on support from the Ultras Ahlawy, the club of hardcore soccer fans who have protected anti-government protesters at demonstrations and caused disruptions around Cairo with their political dissent.

Riot police arrived earlier in the day on June 11 to separate the protesters and counterdemonstrators, forming what Radwan described as a “human shield” around the artists and intellectuals. Radwan said that he is not fearful that police will act to remove the demonstrators from the ministry. “It is normal procedure that the police should have taken action against us from the beginning, but instead the police came and made sure that we are safe, it’s a good sign,” he asserted.

Although the protest continued peacefully into the late night, with musical performances and poetry, there was some fear that pro-Islamists are mobilizing and will return stronger in the coming days.

According to Radwan, the artists’ sit-in is being viewed as a “small scenario of what will happen on the 30th," the one-year anniversary of Mohammed Morsi’s presidency and the day the Tamarod (Rebel) campaign is calling for a million-man march to the Ithadiya presidential palace to announce that the president has lost his legitimacy. Tamarod members are working to collect 15 million signatures — almost 2 million more than the number of votes by which Morsi won the presidential runoff — to demand early presidential elections. At a news conference on June 9, Tamarod announced that it had already collected 13 million signatures from across the country.

Tamarod, which is supporting the artists’ protest, has also been campaigning at the Ministry of Culture, asking the crowd to sign the petition while participants wave Tamarod petition sheets on stage and in the crowd.

Indicative of the country’s frustration with the National Salvation Front, the mainstream liberal opposition coalition, its leading members were accused of opportunism by protesters and commentators on social media for attending the protests. Hamdeen Sabahi, chairman of the Egyptian Popular Current, was met with jeers and demands for justice for those killed during the revolution when he spoke at the protests on June 10.

Since Abdel-Aziz’s appointment in early May during a cabinet shake-up, he has fired the heads of the General Egyptian Book Organization, the Fine Arts Sector, the Cairo Opera House, and the National Library and Archives. The removal of Opera House Director Ines Abdel Dayem, in particular, catalyzed the artistic community to action. On May 27, the opening night of Aida, the Opera House curtains lifted on performers and staff in full costume dress holding anti-Brotherhood signs and chanting calls for the downfall of the regime.

Abdel-Aziz has defended the dismissals as a campaign against corruption. In a June 5 press release he said, “We will fight the wastage of public money in the name of culture and art. No group of individuals will force us to live and labor just to serve their private interests.”

Khaled Fahmy, chair of the history department at the American University in Cairo, clarified in a June 8 Al-Ahram op-ed, “The interest of the Brotherhood in the Ministry of Culture is based on an old and long engraved belief they have; namely, that Egypt's identity has been hijacked by a handful of Westernized intellectuals, and that the time has come for Egypt to regain its original, pristine Islamic identity.”

Comments made on June 1 by Shura Council and Salafist Nour Party member Gamal Hamed against ballet are emblematic of why the artistic community is actively on the offensive. Hamed sparked controversy and concern when he described ballet as “the art of nudity” and called for banning ballet because he believes Islam forbids it.

Radwan told Al-Monitor that the office of the presidency had sent an open message to the protesters acknowledging the artists’ demands, but the artists’ refused to reciprocate the gesture or to engage in dialogue. They have made clear that they will continue their sit-in until Abdel-Aziz is removed.

The Freedom of Creativity Front, a coalition of artists supporting the sit-in, clarified in a June 6 statement that their rejection of the Abdel-Aziz is not personal, but in response to government policies that view the “country as spoils to be divided among its supporters and followers.”

Asma’a Shater, 24, a computer programmer, attended the protest on June 11 “to support innovation and creation in our society.” According to her, there is no freedom of speech, opinion, or culture under the ruling government.

Amed Mohamed Ibrahim, 75, a retired military officer and self-described Nasserite, told Al-Monitor that he had come to support the artists and intellectuals of the sit-in against the “facist rule” of the Muslim Brotherhood.

“This is the second stage of the revolution. The number of people against Morsi are increasing. Of course he will be removed from power,” Ibrahim said with confidence.